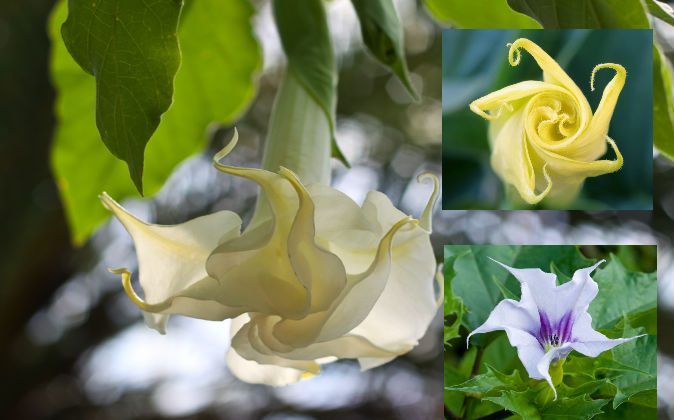 Scopolamine comes from the seeds of a family of plants that includes angel’s trumpets (left), sacred datura (top right), and jimson weed (bottom right). Scopolamine, or "devil's breath," has been called the world's scariest drug; it is also prescribed in the United States for nausea, as an aid to quit smoking, and for other uses. (Shutterstock*)
Good to Know

We’ve all seen the laundry list of side effects on advertised prescription drugs. When the startling ones are mentioned, such as suicidal thoughts, psychotic behavior, death, we may question if we’re entering a devil’s bargain to relieve an illness.

Taking the drug scopolamine has made at least one user believe he literally sold his soul to the devil to get better. Scopolamine is known as “Colombian devil’s breath;” it is called “the scariest drug in the world” in a Vice documentary; and it is approved by the Federal Drug Administration (FDA) as an antinauseant.

This isn’t to suggest your doctor is ready to give you the scariest drug in the world and set you off on a psychotic episode. Of course, different dosages have different effects, and doctors will generally give good advice on how to avoid negative side effects. But understanding the history of the ingredients in your medications can be helpful.

Reading the medicinal ingredients on a pill bottle is like reading Greek for most of us. If “devil’s breath” were listed would it make you wonder what in the world you’re taking? How about scopolamine? That sounds a lot less alarming, right?

Many of the side effects listed as a footnote on drug ads were discovered when people experienced them. Behind each “suicidal thoughts” listing, is at least one person whose life was negatively impacted by that medication.

Here’s a closer look at scopolamine’s history, current use, and effects, plus a look at other medications prescribed as sleep aids, asthma treatments, smoking cessation drugs, and more.

Scopolamine has been called a “zombie drug.” A person who takes it can seem to function normally and consciously, but will often be unable to remember what he did. The person will also do whatever he is told—go to an ATM and give someone all the money in his account, for example. It’s also been used as a date rape drug and as a truth serum by Colombian gangs and the CIA (the latter used it during 1960s experiments, according to John D. Marks’ book “The Search for the ‘Manchurian Candidate”).

In 2007, Vice magazine correspondent Ryan Duffy went to Colombia to investigate the uses of scopolamine and documented these and other disturbing uses of the drug.

The same drug was prescribed for some 60 years in the United States for a variety of ailments, including insomnia. In 1990, the FDA banned its use in sleep medication, though it is still approved today for use in anti-nauseants. The Mayo Clinic notes that, although the only approved use for scopolamine is to treat nausea, once a drug is FDA-approved it may be used to treat other ailments if it is deemed effective.

It is used, for example, to help some people quit smoking.

Epoch Times asked the FDA to elaborate on the concerns surrounding scopolamine that prompted the ban against its use in sleep medications. It was difficult to find detailed information, an FDA spokesperson reported. The ruling that banned it basically said its effectiveness was unclear, without giving much more information (page 13 of the linked PDF).

A 1978 assessment of the drug noted minimal study on its effects even though it had been in use for decades. This assessment stated what happened when doses were too high: “The behavioral and mental symptoms may suggest an acute organic psychosis. Memory is disturbed, orientation is faulty, hallucinations are common, and mania and delirium often occur. In some cases of scopolamine poisoning, a mistaken diagnosis of acute schizophrenia or alcoholic delirium has been made, with the individuals being committed to a psychiatric institution for observation and treatment.” (pages 33-35 of the linked PDF)

The doses that would be effective as a sleep aid would not be safe, the report noted—even though the drug persisted on the market for another decade.

Erowid, a publication specializing in psychoactive plants, chemicals, and related issues, also provides a platform for members to share experiences they have had with such substances. A few members told of their experiences with scopolamine. These are anecdotal and unverified accounts, and any negative side effects may not be experienced by all users.

In 2009, a man was prescribed scopolamine to help with motion sickness. He concluded that “it messes with your ability to discern reality from imagination.”
“It’s not like any other drug where you remember you are on a drug. The hallucinations on belladonna alkaloids seem utterly and completely real. They cannot be separated from reality.”

Another user tried it recreationally in 2002, at a much higher dosage, and described terrifying effects. The 1978 FDA report stated that 2.0 mg three times a day caused nightmares and other adverse effects. This man took 7 mg in one shot.

Like the previous user mentioned, this user said the hallucinations were very real. He said they were “unlike the fanciful visions and distortions that one obtains on [other] … psychedelic drugs.” He was surrounded by living forms and felt “an oppressive force pinning him down on the bed, paralyzing him” (yes, the account is written in the third person). He continues: “Subject pledges his soul to the demon who is sitting on him in exchange for a refreshing drink of water. The demon takes his soul, doesn’t provide the agreed-upon water. Subject resigns himself to eternal damnation.”

Some believe that certain drugs can open one up to harmful beings and demons in other realms.

This man later regained his faculties and found himself at work speaking with a colleague. Though his memory was wiped, he had apparently completed paperwork intelligibly and done his job without drawing attention to himself for acting strangely.

He writes: “Moral of the story: Don’t do scopolamine. … It will make you a zombie.”

“After taking Ambien, you may get up out of bed while not being fully awake and do an activity that you do not know you are doing. The next morning, you may not remember that you did anything during the night.” Reported activities include:

Other side effects include, “abnormal thoughts and behavior, … more outgoing or aggressive behavior than normal, confusion, agitation, hallucinations, worsening of depression, and suicidal thoughts or actions.”

Scopolamine is among the belladonna alkaloids that have anticholinergic properties derived from a family of plants that includes Jimson Weed. “Anticholinergic” refers to a substance that blocks some neurotransmitters.

Anticholinergic drugs may be prescribed to help people quit smoking, or for asthma, diarrhea, or excessive salivation.

In one case, a 59-year-old man who was prescribed one of these drugs to help him quit smoking was hospitalized after contemplating murdering his wife. He thought his family was against him.