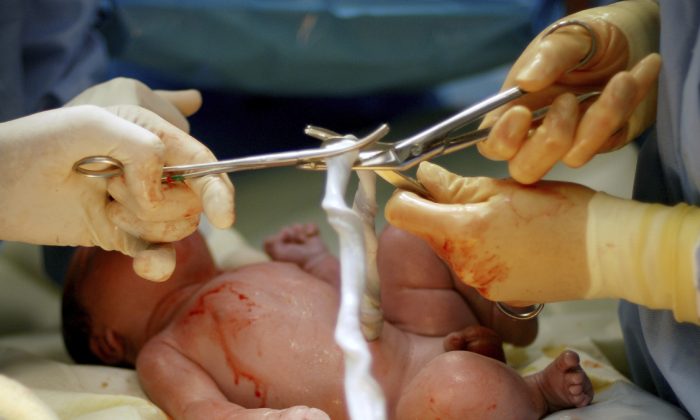 One of the most common surgical procedures in the world today – one that every human alive has undergone – is the clamping and cutting of the umbilical cord at birth. There is no dispute that we need to clamp and cut the umbilical cord. But there remains controversy over how soon after birth this should occur.

Early clamping of the cord began in the 1950s and 60s with the introduction of active management of the third stage (birth of the placenta) in order to lower the rate of haemorrhage after birth. This involves giving women an injection of Syntocinon (synthetic oxytocin) with the birth of the baby, clamping and cutting the cord and pulling the placenta out using controlled cord traction.

Interestingly, when the first commercial cord clamp device was released in the 1890s, instructions published in the Lancet directed that they should not be used until the cord stopped pulsating and blood flow ceases. Somehow over the years we have moved the process of cutting and clamping the cord closer and closer to the moment of birth.

The problem is, during the first few minutes after birth a baby can receive 80-100 millilitres of blood, which is nearly a third of their blood volume. The volume decreases with the height the baby is held in relation to its mother and the length of time before the cord is clamped. But most of the blood volume passes to the baby in the first two to three minutes.

A Swedish study by Ola Andersson and colleagues just published in JAMA Pediatrics has followed up children at four years of age who were part of a randomised controlled trial comparing immediate clamping of the umbilical cord (ten seconds or less after birth) with delaying clamping (for three minutes or more).

The availability now of longer-term data on outcomes of the timing of this common intervention means an important knowledge gap has been filled. Hopefully researchers will continue to study these children so we have data on school performance in the near future.

In 2011, Ola Andersson and colleagues published a study that followed the same infants in their first four months of life. The data showed that infants whose cord clamping was delayed had less iron deficiency and anaemia. There were no significant differences in breathing problems, or the need for phototherapy to treat jaundice, a common concern expressed by doctors.

Iron deficiency anaemia in young children is a major public health problem and has been associated with poorer brain development.

Iron deficiency anaemia in young children is a major public health problem around the world and has been associated with poorer brain development. Iron is important in brain growth and iron deficiency can lead to lasting cognitive and behavioural delays. This latest study appears to support the ongoing effects of this.

A 2007 review of 15 studies showed late cord clamping (at least two minutes) reduced the risk of anaemia by nearly half. Jaundice seems to be slightly increased with delayed cord clamping, however this usually resolved itself without the need for phototherapy treatment.

The most recent analysis of all the randomised controlled trials examining early or delayed clamping of the umbilical cord, the 2013 Cochrane Systematic Review states:

A more liberal approach to delaying clamping of the umbilical cord in healthy term infants appears to be warranted, particularly in light of growing evidence that delayed cord clamping increases early haemoglobin concentrations and iron stores in infants.

No doubt the conclusions will be even stronger in the future in light of this new study.

In 2013 I wrote an article on The Conversation asking, “Are we cutting umbilical cord too soon after birth?” Two years later we continue to have policies that encourage this to happen in Australia and little has changed. Meanwhile, the scientific evidence keeps mounting that we may be causing harm by this routine practice.

In the United Kingdom, the highly respected National Institute for Health and Clinical Excellence (NICE) changed its recommendations in December 2014 following lobbying by consumers and midwives. It now recommends not clamping the umbilical cord before a minute and waiting up to five minutes or even longer if this is the woman’s choice.

The World Health Organization recommends delaying cord clamping to one to three minutes following the birth and have designated this as a “strong recommendation”.

The leading midwifery and obstetric bodies in the United Kingdom – the Royal College of Midwives and Royal College of Obstetricians and Gynaecologists – changed their guidelines in 2012 recommending delaying clamping of the cord for around three minutes after birth.

Hannah Dahlen is Professor of Midwifery at University of Western Sydney. This article was originally published on The Conversation. Read the original article.