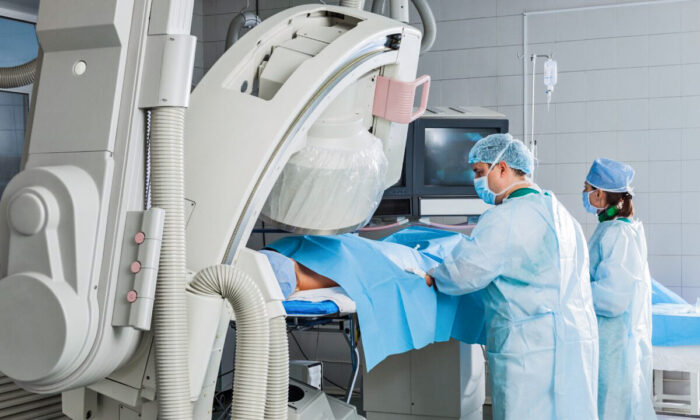 Avoiding lawsuits may seem necessary for doctors and hospitals, but patients should be aware of its effects on health care. (Beloborod/Shutterstock)
Mind & Body

It may be more than just costly
By Peter Weiss

HT was a 27-year-old woman who was having some pelvic pain, nothing really bad, and it sounded like cramping due to her period. Could be endometriosis, but that’s for another story. The problem is that when I was called by the ER doctor to go see her, she told me that the lab tests were normal and the CAT scan was negative as well as the pelvic sonogram. I asked the doctor, was the pain that bad you ordered a CAT scan? Her response was very typical, “Everyone with pain gets a CAT scan.”

The now-defunct U.S. Congress Office of Technology Assessment defined defensive medicine as “when doctors order tests, procedures, primarily (but not necessarily) because of concern about malpractice liability.”

According to a 2018 article in the Journal of Hospital Medicine defensive medicine was estimated to cost $45 billion annually, even more when you include overall liability costs. This is only an estimate, since it’s very hard to quantify what medicine is defensive. A lot of what we as physicians do can easily be excused as “being thorough, just in case.” And sometimes we do it at the patient’s request.

I went down to see HT. She was a lovely young woman who thought she may have had an ovarian cyst. She was visiting from out of town and didn’t know what to do. I reassured her, she was fine, gave her some ibuprofen, and sent her on her way. Never mind the question of why she felt she needed to go to an emergency room at two in the morning. The real question is, why did she get a CAT scan?

Research findings on the risks of too many CT scans are a little conflicted in their analysis. Some studies show a theoretical increase in potential future cancer cases from the roughly 70 million CT scans done yearly in the United States. There are some studies claiming such fears are exaggerated. In 2016, Medical News Today reported there was  “no evidence that CT scans, X rays cause cancer” while other studies suggest the risk is low. My point here is not to argue whether or not CT scans can potentially cause harm, it is to say, why get one if you don’t need it? That is the point of defensive medicine.

A 2014 paper in JAMA Internal Medicine highlights that 28 percent of orders for CAT scans in a three-hospital review were for “defensive medicine.” In that same article, it mentions a 2008 survey of Massachusetts internists who reported that 27 percent of CAT scans, 16 percent of laboratory tests, and 14 percent of hospital admissions were ordered due to liability concerns.

There is an even more interesting report from the results of a survey in Pennsylvania of 800 physicians published in the Annals of Medical and Health Science Research in 2013. It revealed that 92 percent of physicians were found to be ordering imaging tests and diagnostic measures for assurance. That is a polite way to say “defensive” medicine. In 2010 Gallup and Jackson Healthcare found 73 percent and 92 percent of private practice physicians, respectively, admitted practicing defensive medicine.

What really drives this “defensive medicine,” and is it really bad? The answer is mixed.

In 2015, the National Health Interview study found 25 percent of women who had a yearly screening mammogram were informed that they had dense breast tissue.

The FDA ruled that in March 2019, radiologists must inform patients who were getting screening mammograms if they were found to have dense breast tissue. The real problem here, other than the government getting involved when they shouldn’t, is what does dense breast tissue mean? Now the official written reports we as physicians get state that they have dense breast tissue, and they add “dense tissue can make it difficult to find a small cancer.”

Some radiologists even add on the report to consider getting an MRI. Not only are there no guidelines as to what is recommended, but some radiologists also advise additional costly testing. This is defensive medicine. I am guilty of this as well. Now when a patient of mine has such a report, I offer them a breast ultrasound and document it was offered. I do tell them very openly that this is defensive medicine and I document their decision.

I am sure all of you have noticed that when you go to see your physician or nurse practitioner, he or she is looking at the computer or laptop. Rarely do they look up at the patient. It’s all about data entry and clicking on the appropriate box. I admit that I’m old, and even though I carry a small laptop, I leave it on the counter in the exam room and talk with my patients looking directly into their eyes. I jot down notes on paper and later transfer them to the computer. The laptop is for reference to old labs or imaging results if I need them for discussion.

A 2016 study from Annals of Internal Medicine, called “Allocation of Physicians Time in Ambulatory Practice: A time and motion study in 4 specialties,” stated that “for each hour doctors give direct clinical facetime to patients, approximately two further hours are spent on electronic records and desk work in the clinic day.”

Maybe we physicians practice defensive medicine because we have such limited time to spend with our patients and it’s easier to order a test than to take the time to think through if it’s really needed. That’s only a part of it, the real reason is we know we can be sued for almost any bad outcome. Bad outcomes usually aren’t malpractice, but tell that to the busy ER doctor at two in the morning when you are constipated and you decide you want them to treat you like it’s a life-and-death emergency.

As Hippocrates guides us to pledge, “I will prescribe regimen for good of my patients according to my ability and my judgment and never do harm to anyone.”

That simple oath can sure get complicated.