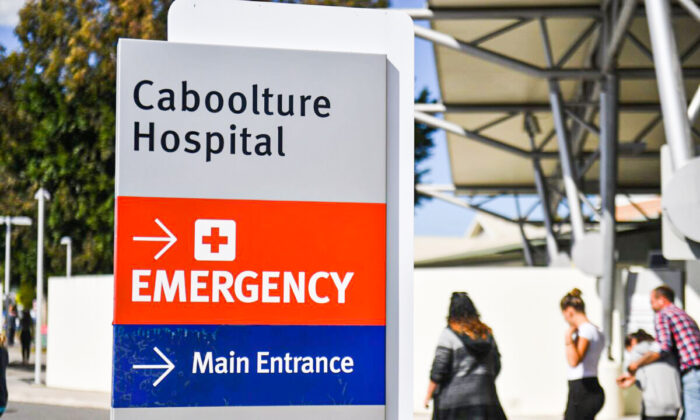 **FILE** A Monday, July 23, 2018 file photo of Caboolture Hospital in Caboolture, 51 km North of Brisbane. It has been three years since school teacher Olivia Keating went to Caboolture Hospital for a caesarean and emerged with part of her bowel sewn into the wall of her abdomen, Tuesday, September 21, 2021. (AAP Image/Mick Tsikas) NO ARCHIVING
Australia

Death at Australian Hospital Due to Mismanagement: Review

Concerns over bullying, ‘inappropriate behaviours’ in the workplace
By Daniel Y. Teng

One death at a hospital in the Australian state of Queensland was caused by mismanagement stemming from a “negative workplace culture” which potentially compromised quality of care, according to an inquiry.

The Metro North Hospital and Health Service, which covers northern Brisbane, is carrying out a review into its operations after the state opposition party publicised claims that surgical negligence and a culture of bullying existed at the Caboolture Hospital.

Dr. James Sweeney from St. Andrews Hospital was tasked with investigating the allegations that stretch from 2015 to 2020.

On Nov. 3, the final report found that one out of 37 deaths after surgery could be attributed to clinical negligence.

“Assessors identified only one preventable clinical management issue ‘decision to operate’ that caused the death of a patient who otherwise would have been expected to survive,” the report said (pdf).

In response, the chair of Metro North board, Jim McGowan, said “no heads were rolling” because there was no evidence of malpractice.

“There are accidents that occur in hospitals every day. Surgery is a complex issue,” he told reporters on Nov. 3.

“There are 5,000 operations in Caboolture a year, and the number of people who are affected is relatively small, but each one is important.”

It also called for standardised reporting templates across all hospitals under Metro North.

Concerns were also raised regarding “inappropriate behaviours and attitudes” among staff.

“As a result of poor leadership, and fear of retribution because of past bullying and harassment, responses to staff surveys and suitable representation at meetings saw ineffective participation and inadequate information and feedback about safety and quality in particular,” the report stated.

The report made 19 recommendations to improve processes and procedures.

“The management structure at Caboolture has had some changes which are now imminent, and we will be recruiting new people into some of those critical roles,” McGowan said.

The result has played out across the hospital system with major delays and ambulance ramping issues proliferating.

The state’s Health Minister, Yvette D’Ath, accepted the report’s 19 recommendations and called on all hospitals across Queensland to learn from the inquiry.

“There is definitely improvements that have to be made around governance, around the culture of the hospital, and particular areas within the hospital,” she told reporters in Cairns on Nov. 4.

“Even though this is a review into the Caboolture Hospital, I would expect every hospital and health service in Queensland to be looking at this report, looking at their own processes.”