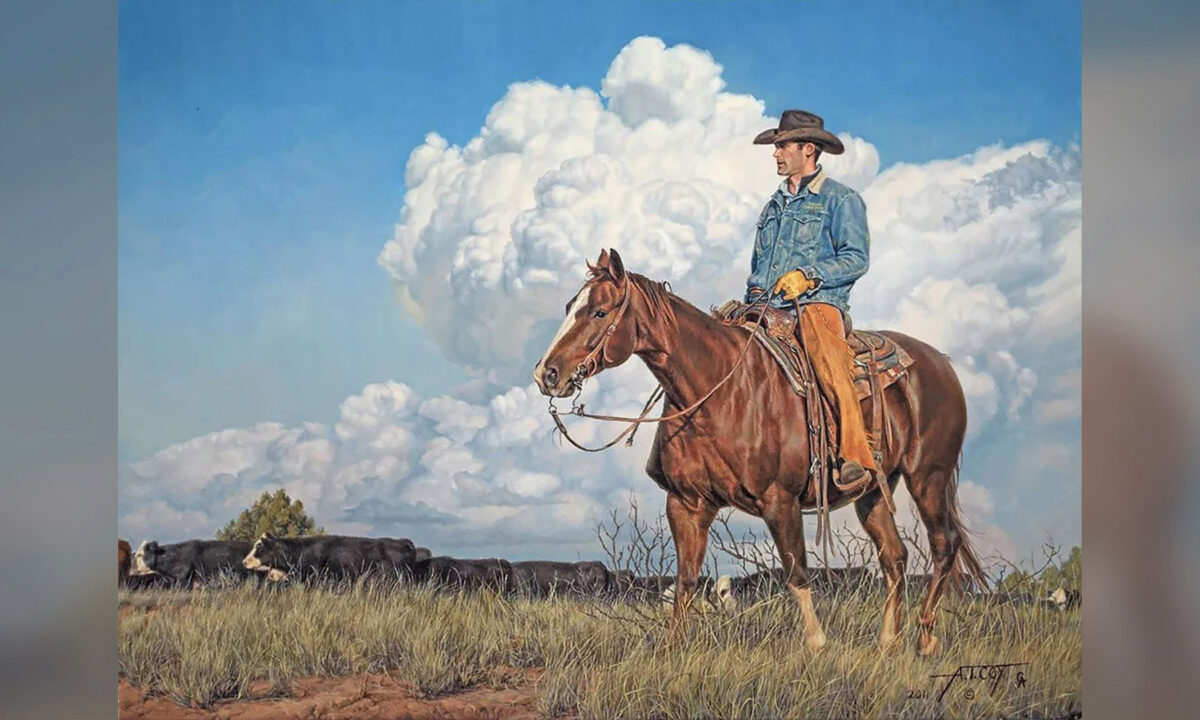 Setting the mood for a cowboy painting, 65-year-old New Mexico artist Tim Cox begins mounting a smoothly primed board on easel, and, paintbrush in hand, applies ever-so-thinly diluted washes of lightly pigmented tones of oil and spirits. This is how a Western realist oil painting starts.

He masses-in main shapes first, fuzzy blobs, no details yet—there will be plenty of time for that later—and a picture, like a ghost, begins emerging from the stark white gessoed panel surface. A pencil underdrawing ensures the composition is plotted accurately.

Storm clouds roiling across a backdrop, or vast expanses of diffused blue sky, or perhaps a blazing sunset, rendered in oil, help bring that Western mood to fruition. When the details start plucking forth the scene, steadily bringing it into focus, they don’t stop until the very finish—every variety of grass, shape of animal’s ear, or horse’s gait depicted bespeak meaningfully of years lived, growing up on a ranch in Arizona in the 1970s.

Cox has been piling up 8 or 12 of these panels per year for the past 47 years—since he was a teen growing up near Duncan. “My great-grandparents had a ranch down in Douglas, Arizona,” he told The Epoch Times. “I went to work on a ranch when I was 8 years old in the summertime. … I got paid like a dollar a day, but I thought it was bigtime stuff, making $40 to $50 for the summer, while you’re out on summer break of school. And shod my first horse when I was 8 years old.”

He trained his first horse at 12, and lived off the grid before he even knew there was a grid. The nearest electrical pole was 1 1/2 hours away; the nearest shopping 2 1/2 hours. All this impressed upon a young imagination, during those formative years, inspiration for an artist. But it was Cox’s drawing and painting skills that first caught his teacher’s eyes. “My kindergarten teacher called my mom and dad to come in to see her, and I thought I might be in trouble for something,” he said. “She said, ‘You need to get this child art lessons.’

“Our small town at Duncan had a pharmacist that was also an artist. And he had a place where he painted set up in the drugstore, and he would sell fountain drinks, and milkshakes, and malts,” Cox recalled. After school, he would walk over for a hamburger and watch the man paint. One way or another, young Cox got the lessons he needed.

Still a teen, he was already selling his paintings for $5 a pop. His dad, who worked for Arizona State Highway, found plenty of patrons among his co-workers. Art classes with Polish realist painter Frederick Taubes—who remarked in a very Polish accent of Cox’s realism, “Your horses are more horsey than the horse!”—these furnished him orders from all the students in the class. At 17, the artist signed on with Trailside Galleries in Scottsdale. He eventually joined Cowboy Artists of America, serving as president for three terms.

In his paintings, Cox incorporates cowboys trading sterling silver antiques in “Trading Treasures”—one of his faves; ranch sons helping move cattle; grandchildren and greatgrandchildren. Covid mandates even made a cameo. “It was right after corona virus where they had lifted a bunch of the isolation, and I just wanted to do something that represents freedom,” he said. In “Glorious Freedom,” Cox depicts his granddaughter riding full out, wind blowing through her hair, and how free she felt.

Today, nearly 50 years on as a professional, Cox’s has no intention of retiring any time soon. Living in Bloomfield, New Mexico, the cowboy artist continues to hone his craft. He expected to get faster as he got older and more experienced; oddly, that’s not what happened. “I always thought the older I got, the more I learned, the faster I get,” he said. “But I found out that the more I learned, the less I could let things slide by. I work on it to get it just right. Don’t just let it go. I struggle until I get it right.”