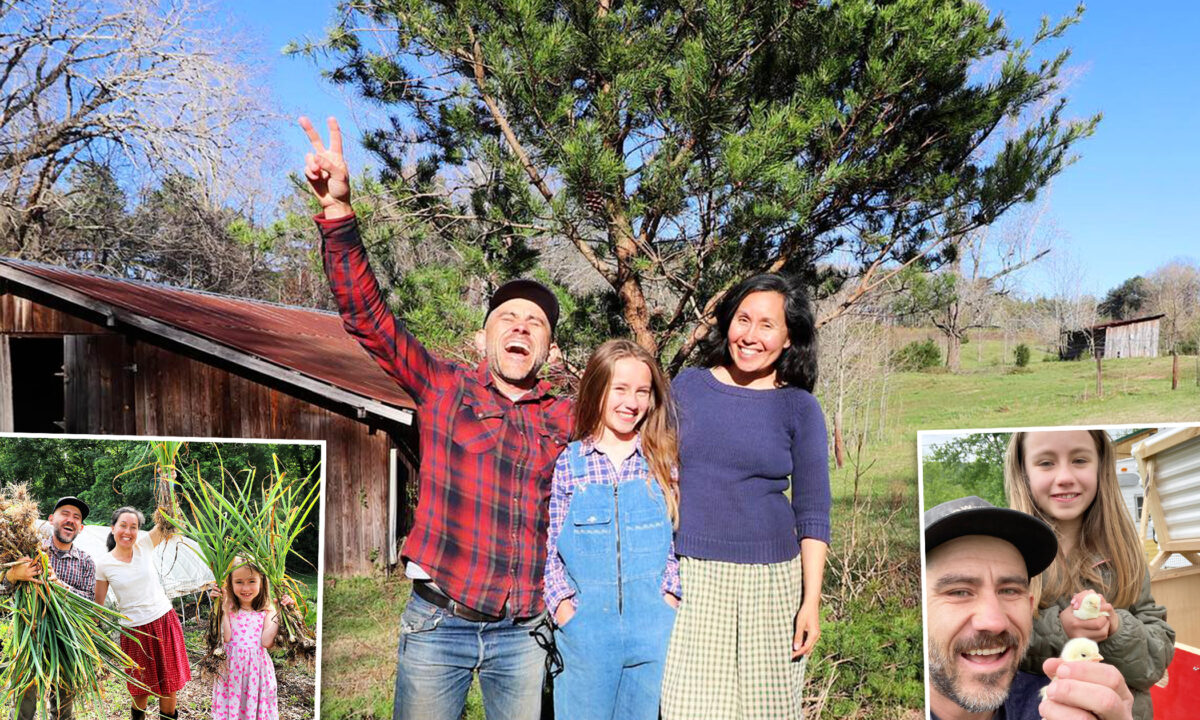 After receiving a cancer diagnosis, a couple from a city in Southern California gained a new perspective on life and began to question their lifestyle. They then made the huge decision to move to the mountains of North Carolina for a more intentional life. Six years on, they are growing their own food, homeschooling their daughter, and living their dream life.

Jason and Lorraine Contreras, and their daughter, Penelope, currently have a 14-acre homestead in western North Carolina. They have learned to grow the majority of their own food, raise their own meat, improve the land and soil they live on, and thrive without electronic distractions.

“Twelve years ago I was diagnosed with Hodgkin’s lymphoma,” Jason told The Epoch Times. “After chemotherapy, losing my hair, and a whole year of feeling completely sick from all the treatments, my wife and I began to question everything, from the food we brought into our home and put into our bodies to the products we used on our skin.”

During this time, Lorraine, who worked in the fashion industry, loved the idea of climbing the corporate ladder and was driven by ambition.

“I loved clothes and they defined me,” she said.

However, after Jason’s cancer diagnosis and visiting doctors for various appointments, she realized a few things. She found she wanted to be with Jason at every appointment as well as when he was home sleeping off nausea from chemotherapy. She also wanted to cook him the most nourishing meals, yet had no idea where to begin. She also thought of having children after all, but questioned whether it was too late.

“I looked at our life and we were so far from that,” she said.

She felt as helpless as Jason in the face of his cancer diagnosis, so the couple took back control where they could—in their choices of what to eat, how to work, where to live, and how to spend their leisure time.

They first made a small garden, tuned out the noise of the city by getting rid of their TV, started cooking meals from scratch, and daydreamed of leaving the California city life behind to own a bigger piece of land. One day, Jason quit his office job of 16 years, and the couple started to make their dream a reality.

“No more days spent sitting under artificial lights and hunched over a computer,” he reflected; “I was free to dig my hands in the soil and get dirty!

“Slowly but surely, we made the transition into this homesteading lifestyle.”

In 2016, the couple sold the majority of their belongings and left California when Penelope was just 4 years old. In North Carolina, they had no friends or family nearby. Unaware of whether it would all work out, their only plan was to “figure it out.”

According to Jason, their only goal at that time was, “to grow food, build a homestead together as a family, and to never go back to an office job.”

They initially started out on a 1.5-acre plot. Jason created a YouTube channel, SowTheLand, to chronicle the family’s journey as novice homesteaders.

After almost six years at their first homestead, and many lessons learned, the family had the skills and confidence to graduate to a much larger plot. They now have a 14-acre plot and share the land with two steers, a pair of breeding kunekune pigs, meat chickens, egg-laying chickens, two geese, and eight turkeys.

“We found an amazing fixer-upper horse property,” said Jason. “The pastures have been over-grazed and soil is beaten down over the years from too many horses; some run-down barns need a lot of attention.

“We grow most of our own food. We would love to get to a point where we grow almost all of it. We have a small community of like-minded farmers around us where we can barter for things that we cannot produce on our own.

“Our goal is to have a fruit orchard; we have started one, but we need to build a fence to keep the deer out and continue planting.”

In the new homestead, the family have also gained access to a creek and a private well, and masses of space to expand their gardens and animal husbandry. They plan on turning the old stables into a barn for hosting educational workshops, to teach others how to plant and harvest farm-to-table food, and raise and butcher animals.

“We are absolutely thrilled to have this old farm,” said Jason, “and we are already hard at work, rolling up our sleeves, turning it into a working homestead and, day by day, healing the soil.

“I guess that’s why we chose the name ‘Sow The Land; we are restoring the land, making it better than we found it, and growing the healthiest food from it.”

Jason, who has been in remission since completing six months of chemotherapy is tasked with continual building, gardening projects, animal husbandry, troubleshooting on the homestead, and creating social media content for SowTheLand, including filming and editing their videos for the channel.

He said that he feels more active and is in better shape today than ever before.

Another major change that came with homesteading was the decision to homeschool Penelope. Luckily, Jason and Lorraine have the support of their local community, which comprises other homesteading families and homeschooled children.

“We knew we were different, and we wanted different for our daughter,” Jason explained. “We feel that it is important to have our child be with us all throughout the day; she not only learns by watching us work, but by being hands-on too.

“Coming to a slow-paced farm where we are nurturing truth, goodness, and God’s creation has been the best decision we ever made for her.”

Following Charlotte Mason’s holistic education philosophy,, Jason and Lorraine encourage Penelope to learn both from books and from experiences, and celebrate the fact that she is becoming her own person.

When not studying or helping on the farm, Penelope, now 10 years old, loves playing with her friends and writing novels on her typewriter. Her parents also lead by example by following traditional roles at home.

Jason said: “I work on woodworking and building projects, and care of the large animals like the steer and broiler chickens. Lorraine and Penelope share the work of the garden, and the smaller animals like the egg-layer chickens and pigs.”

Lorraine also cooks and homeschools Penelope. However, when all of the three are needed for a task, they all just jump in and support.

After years of living in North Carolina, Jason has concrete thoughts on what it means to live in a minimalistic and intentional way.

Living intentionally is like “savoring every bite of your food before swallowing it,” he reflected. It is “feeling your body, and giving it what it needs.” It also means making day-to-day choices that are “not the easy way out,” such as choosing reading or a new hobby over turning on the TV.

Living minimally means “reducing a lot of clutter and noise around you, so you are able to focus on the things and people that matter,” said Jason. It is turning off the “noise” of consumerism and choosing to live at one’s own pace instead of feeding the need of desires.

But homesteading is not a miracle cure for life’s challenges. Since upsizing to a 14-acre plot, Jason and Lorraine’s challenges persist, but their nature has changed.

Some of the small challenges, according to Jason, include saving up to buy a tractor, the cows getting out while the family aren’t home, and learning how to manage a large property with more animals.

“Every challenge we document on our YouTube channel, so hopefully others will learn and be encouraged to try homesteading!,” he said.

The family’s YouTube channel has received a huge positive response from netizens. Jason said: “Our hope is that what we share on our journey can inspire others to slow down, savor each moment, each person, steward the land and animals, and feed our bodies with healthy food and healthy choices.”

Reflecting on the journey thus far, Jason said they’re now able to make choices for their own family. However, he stressed that it does take complete discipline to make decisions that are opposite from how you were taught.

“But if you want it bad enough, you find that drive that keeps you strong,” Jason said. “For us, that drive is having each other near, living and working together, and creating something meaningful that will last longer than we will.”