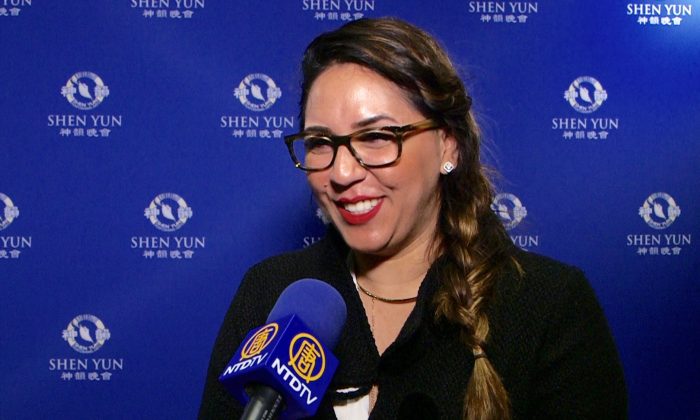 LONG BEACH, Calif.—”I didn’t realize all that was behind this performance. I really came in here with an open mind, and I left with a lot more than I bargained for. So, thank you very much,” said Myra Maravilla to the performers, after seeing the Shen Yun Performing Arts for the evening performance at the Terrace Theater on March 20.

“I love the performance,” she said, especially the freedom of expression through arts and spirituality.

Independent, non-profit Shen Yun was formed in New York by a group of leading classical Chinese artists from around the world in 2006. Shen Yun’s mission is to revive the true, divinely inspired culture of China that had been nearly destroyed under Chinese communism. The company shares it with the world through story-telling dance and music, according to their website.

Shen Yun performance consists of nearly 20 vignettes that are accompanied by a digital backdrop to set the scene and an orchestra consisting of a unique blend of Eastern and Western instruments to set the tone. As a whole, they take the audience on a journey through China’s 5,000-year culture and beliefs, where myths and legends come to life, and virtues such as bravery, compassion, kindness, loyalty, and perseverance are personified.

Traditional Chinese culture was deeply spiritual. It was influenced by Buddhism, Daoism, and Confucianism, and was based on the harmony among heaven, earth and humankind.

Councilwoman Maravilla gushed about the performance: “Oh, my gosh! It’s definitely enlightening culturally. I think everybody that came here tonight not only left extremely happy and satisfied with the performance, but also with a little bit more knowledge. And I think that knowledge will express itself, and I think people will now think differently about China.”

She was enchanted by the vocalists who use the bel canto technique to sing in Chinese, and was touched by the lyrics. “The singers, the soprano, female singer was phenomenal.  The lyrics were really touching.”

Councilwoman Maravilla was surprised to learn about the persecution of Falun Dafa [also known as Falun Gong] in mainland China.

She was referring to the two story-based dances, “The Steadfast Heart” and “Hope for the Future,” that are set in modern China. In them practitioners of Falun Dafa, a spiritual meditation practice that espouses truthfulness, compassion, and forbearance are arrested, tortured, imprisoned, and killed for their beliefs.

Before departing, Councilwoman Maravilla said she would definitely be back next year to see the completely new show. “What I’m taking away is a new understanding of the civilization of China, and I really hope to learn more about it,” she said.

She added, “I would just like to say that hopefully other people will enjoy future performances here, around southern California, and around the world. I think young, old, all ages and ethnicities will definitely benefit from attending this performance.”