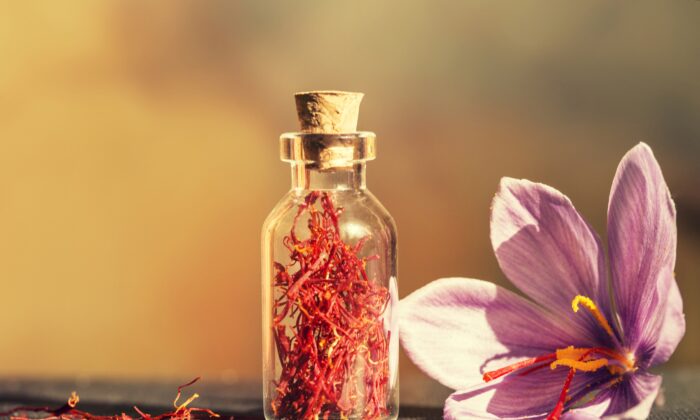 Saffron has historically been used in Persian traditional medicine for the treatment of memory problems. (Patricia Chumillas/Shutterstock)
Mind & Body

This tiny stigma, collected from thousands of flowers for only one week of the year, may hold multiple therapeutic uses
By Joseph Mercola

Saffron is one of the most expensive spices in the world, and for good reason. Evidence suggests this unique and costly spice may have a significant impact on the development and progression of Alzheimer’s disease.

Saffron is harvested from the stigma of Crocus sativus, a perennial plant belonging to the iris family. The flower has three stigmas of saffron that must be harvested while the flowers are still closed, during the one week every year when the plant flowers.

It’s believed that saffron is native to Greece, but today most of the spice is grown in Iran, Greece, Morocco, and India. The spice has a complex flavor profile that is difficult to describe. On its own, saffron smells woody with an earthy scent.

To buy the real deal, saffron can cost up to $13 per gram, or about $365 per ounce. To produce one ounce of saffron takes 3,000 stigmas, or 1,000 flowers. When you’re buying saffron, look for a dark red or red-orange color, in which you should be able to see individual threads.

If you’ve found a cheaper saffron, it’s likely fake. The stigmas from safflower plants are sometimes substituted and sold less expensively. They do not add the same color or flavor profile to foods, although they smell a little like saffron. Real saffron is sometimes adulterated by grinding up and mixing safflower stigmas to stretch the product.

Saffron as Effective as Drug Against Severe Alzheimer’s

Saffron has historically been used in Persian traditional medicine for the treatment of memory problems. Multiple animal studies have looked at the antioxidant protection that saffron may offer along with its protection against cognitive decline and memory deficits.

In one animal study, researchers used morphine to induce memory loss and found the administration of saffron attenuated the impairment. In another study, researchers found that animals injected with saffron extract, including the active ingredient crocin, and subsequently subjected to stress, exhibited:

“These observations indicate that saffron and its active constituent crocin can prevent the impairment of learning and memory as well as the oxidative stress damage to the hippocampus induced by chronic stress.”

The main compound, crocin, is a water-soluble carotenoid that has demonstrated potential to protect brain cells in animal and lab studies. Saffron extract was tested against memantine, a commonly prescribed medication for the symptoms of moderate-to-severe Alzheimer’s disease. Memantine is an NMDA receptor antagonist that has demonstrated the ability to slow the loss of cognitive abilities.

Researchers engaged 68 people with a diagnosis of moderate-to-severe Alzheimer’s disease. The group was split into a treatment group and a control group. The control group received memantine at a dose of 20 milligrams (mg) per day while the intervention group received 30 mg per day of saffron capsules for 12 months.

Adverse events related to the intervention or medication were recorded and the participants’ cognitive skills were evaluated every month. The researchers found no statistically significant difference between the two groups. They concluded the saffron extract capsules were “comparable with memantine in reducing cognitive decline in patients with moderate to severe AD.”

Researchers have been looking at the mechanism of action that crocin may take in the brain. During the development and progression of Alzheimer’s disease, tangles and amyloid plaques aggregate in the brain and destroy brain nerve cell function. One lab study demonstrated crocin has a protective effect on the development of amyloid plaque commonly found with Alzheimer’s disease.

It not only inhibits the formation but disrupts current aggregates of amyloid in the brain. Other hallmarks of the disease are the fibril tangles made of tau protein. Another lab study demonstrated crocin had an inhibitory effect on the formation and aggregation of tau protein filaments.

This is estimated to cost the United States $355 billion in 2021 and may rise as high as $1.1 trillion by 2050. Besides Alzheimer’s disease, diseases such as cardiovascular disease, obesity, and Type 2 diabetes have also been growing significantly in the past several decades.

The interaction between aging and insulin resistance may increase the risk of Alzheimer’s disease. Scientists began looking at Alzheimer’s over a decade ago as a form of diabetes that selectively involves the brain. Writing in the Journal of Diabetes Science and Technology, researchers made the case that Alzheimer’s could be thought of as Type 3 diabetes.

“Alzheimer’s disease represents a form of diabetes that selectively involves the brain and has molecular and biochemical features that overlap with both Type 1 diabetes mellitus and T2DM [Type 2 diabetes],” they wrote.

By 2015, researchers from Iowa State University found a strong association between an individual’s memory function decline and insulin resistance, which added to the growing body of evidence that preventing insulin resistance is an important means of preventing Alzheimer’s disease. Auriel Willette, one of the research scientists from the department of food science and human nutrition at Iowa State involved in the study, commented in a press release: “We are terrible at adjusting our behavior based on what might happen in the future.”

“That’s why people need to know that insulin resistance or related problems with metabolism can have an effect in the here and now on how they think, and it’s important to treat.”

Scientists continue to analyze the way insulin affects the brain and find it increases the turnover of neurotransmitters and influences the clearance of the hallmarks of Alzheimer’s disease—amyloid beta peptide and phosphorylation of tau. Insulin is thought to have an effect on multiple pathways that contribute to neurodegeneration.

Saffron contributes to reducing the development and progression of Alzheimer’s disease through reducing insulin resistance. In one review of the literature, researchers identified animal studies in which the bioactive compound crocin helps reduce insulin resistance. This happened when the animals were administered dexamethasone or a high fructose diet to induce high blood sugar.

Animal studies have also demonstrated that saffron extract can lower blood glucose levels and have a positive effect on complications that result from hyperglycemia. Finally, a paper published in 2018 discussed how it exerted a hypoglycemic effect by “improving insulin signaling and preventing beta-cell failure.”

Saffron Works as Well as a Drug to Treat ADHD

Attention deficit hyperactivity disorder (ADHD) is a commonly diagnosed neuropsychiatric disorder that affects 5 percent to 10 percent of school-age children, though it remains controversial, with some researchers suggesting there is overdiagnosis, particularly among boys. The children experience a mix of symptoms, from difficulty concentrating and hyperactivity, to mood swings and short attention span.

The standard medical approach is a central nervous system stimulant drug such as methylphenidate (Ritalin). However, as with many medications, it causes significant side effects that impact the child’s ability to function, including difficulty sleeping, loss of appetite, and nausea.

The children’s behavior was monitored using the Teacher & Parent ADHD Rating Scale, and the researchers found that methylphenidate and saffron had the same effect on ADHD symptoms. In their article published in the Journal of Child and Adolescent Psychopharmacology, the researchers noted that “short-term therapy with saffron showed the same efficacy compared with methylphenidate,” adding that the frequency of the adverse effects was also similar.

“Taken together, since saffron is a ‘putative’ antidepressant and antidepressant agents are acceptable for treatment of ADHD, we hypothesized that saffron intake would be of benefit in these patients. In addition, having the ability to affect both monoaminergic and glutamatergic systems also qualify saffron as a possible candidate for the treatment of ADHD due to malfunction of these circuits in this disorder.”

Research evidence has demonstrated there are several factors that impact the development and progression of Alzheimer’s disease. This means there are several different strategies you can use to help protect your brain health and reduce your risk. I have written about many of these strategies, and many of them involve your nutritional habits.

As discussed earlier, there is a significant link between insulin resistance in the brain, (Type 3 diabetes), and the development of Alzheimer’s disease. You can reduce your risk by avoiding net carbohydrates, processed foods, and sugars that spike your blood glucose and negatively impact your mitochondrial function. Following a cyclical ketogenic diet with intermittent fasting also has a powerful effect on your metabolism.

Research studies have looked at the effect a singular dietary change has on the development of Alzheimer’s disease. One of those is the neuroprotective effect that long-term coffee drinkers experience. In a previous article—“Can Coffee Reduce Your Risk of Alzheimer’s Disease?”—I discussed evidence suggesting that drinking coffee can lower your risk and reduce your overall cognitive decline.

Another dietary change looked at is the impact of sulforaphane, an important compound found in cruciferous vegetables, especially broccoli and broccoli sprouts. Sulforaphane has a significantly beneficial effect on the brain as demonstrated in an initial study in patients with schizophrenia and an Alzheimer’s animal study. Evidence from animal models demonstrates that sulforaphane clears the accumulation of amyloid-beta and tau and improves memory deficits.

While scientists still have a lot to learn about the central nervous system and neurodegenerative diseases, it’s apparent from recent evidence that the decisions you make today can have a significant effect on your potential risk for developing diseases. I encourage you to take simple steps that can have long-term results and to share the information you learn here with your friends and family.