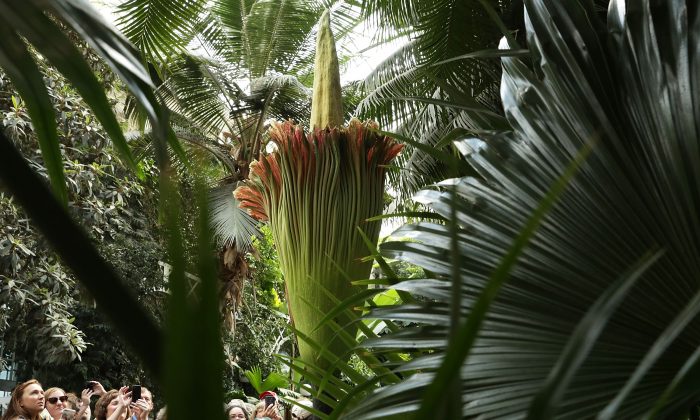 Visitors take pictures of the Titan Arum, also known as the corpse flower, in full bloom at the U.S. Botanic Garden in Washington on Aug. 3. The plant is a native of Sumatra, Indonesia, and has the largest unbranched inflorescence in the world. It emits a stinky smell during its full bloom and last for 24-48 hour before it collapses. (Alex Wong/Getty Images)
Beyond Science

The Amorphophallus titanumin, also known as Titan arums, is commonly called the “corpse flower,” because of the wretched smell it emits when it blooms. Its flower can stand about 10 feet tall and blooms once every six years, or sometimes less frequently.

Corpse flowers have recently bloomed in several locations across the United States, including Bloomington, Indiana; Sarasota, Florida; Washington, D.C.; St. Louis; and New York. Following a Wall Street Journal report on this unusual concurrence, some have called it “ominous.”

But exactly how “unusual” is it?

The University of Wisconsin–Madison reported in 2008 that 157 corpse flower blooms had been recorded since 1889. That study showed a definite uptick in recorded blooms starting in the mid-1990s. For example, 1996 is the first time four blooms were recorded in the same year, although they were spread between Germany and the U.K. In 2007, nine flowers bloomed in the United States within a three-month period.

Kew Royal Botanic Gardens in the U.K. notes on its website, “We now have a large number of plants, and as such flowerings have become a remarkably common occurrence–we have seen more than three times as many titan arums flower at Kew in the last six years than in the previous 120 years!”

Flower Said to Bloom Once in 3,000 Years Spotted Across Globe

It may be that more corpse flowers are featured at botanical gardens in the United States as well, since they often draw visitors and their blooms have been frequently featured in the news.

Daniel Janzen, a professor of biology at the University of Pennsylvania, told the Wall Street Journal that the plants may flower at the same time if they are relatives. But botanists are not sure of the exact origins of the recently flowering plants, so that explanation has not been confirmed.

In the meantime, the ominously named flower has inspired ominous headlines and commentary. For example, Jessie Guy-Ryan of Atlas Obscura asked: “Is it really that far-fetched to suggest that the titan arums of the world have decided, en masse, to teach humanity a very smelly lesson?”