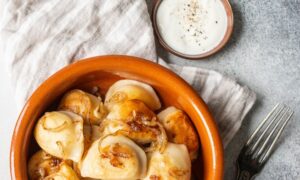 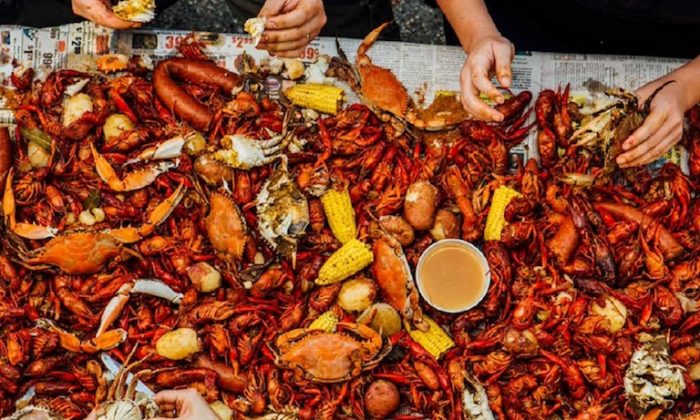 Cajun cooking is rooted in the land's bounty. And the king of that bounty, Toups says, is crawfish. (Denny Culbert)
Food & Dining

For good Cajun food, you have to go to Cajun country, says Isaac Toups.

But for the next best thing, the Louisiana “born and braised” chef offers up his new cookbook: “Chasing the Gator.”

The book is a spirited tribute to Toups’s heritage in all its rich, pork- and seafood-laden glory, complete with rowdy stories of hunting trips and fish camp, boucheries (hog roasts) and catching crawfish—and the all-inclusive feasts that would always follow.

The classics are covered: gumbo (and how to make a roux), caramelized meat-streaked dirty rice, and a guide to throwing a crawfish boil (playlist included). There are beloved grandmother recipes, like Maw Maw Toups’s seafood couvillion (the best Emeril Lagasse has ever had, he writes in the book’s introduction); and some of Toups’s own creation, like hefty double-cut pork chops glossed with a cane syrup gastrique. The latter is a best-seller at Toups’ Meatery, the first of his two New Orleans restaurants.

And there are vegetables, too—they just come roasted in bacon grease, showered with crispy bacon bits, and finished with a dollop of mayonnaise.

Cooking From the Land

Toups has deep roots in Cajun country: He grew up on the outskirts of the tiny, south Louisiana town of Rayne, population 8,000, in Acadia Parish. His ancestors first settled here in the Atchafalaya Basin, land of swamps, bayous, and backwater lakes, in the 1700s.

Toups’s mother grew up a Prairie Cajun, on flat plains where people bred pigs and hunted game, and rice, corn, and sugarcane grew in abundance. His father, on the other hand, came from a family of Coastal Cajuns, raised by the bayou on a bounty of crab, shrimp, oysters, and freshly caught fish. Toups reaped the best of both worlds.

Cooking Cajun means eating from the land, Toups says, and Cajuns are a resourceful bunch. Back in the day, they made do with whatever was available to them in their surroundings: rice and sugarcane, wild game, and some of the “best seafood in the world,” from the brackish waters of the Mississippi River delta. Even nutria, giant swamp rats, were fair game—though you won’t find a recipe for those in the book. As with many a regional cuisine, the foundations of Cajun food arose from the land.

“Why do we eat so much crawfish and sugarcane and rice? Because it grows down here, silly,” Toups said.

People hunted and fished, grew their own gardens, and pickled and preserved in a time without the luxury of refrigeration. In poor communities, rice and roux could stretch a meal and add enough flavor to compensate for the lack of meat.

And when it did come time to butcher and cook a hog, the whole community pitched in to share the labor—thus giving rise to the tradition of the boucherie—and every scrap of the pig was used, from the head (made into hog’s head cheese) to the belly and skin (deep-fried into cracklins) to the backbone and trotters (simmered into stew or a pot of beans).

“Cajuns were going whole hog way before it was cool,” Toups quips.

“We started cooking what we do out of necessity. But then we decided we liked it, and traditions were born.”

These days, supermarkets and refrigeration have lessened the burden of survival. Boucheries slowly died out, and hunting, fishing, pickling and preserving are no longer necessities.

But traditions persist, and Toups knows them intimately well. His whole family grew up learning to hunt, fish, and cook—“you get into it so early that you don’t actually have a first memory of it, you’re just always into it,” he said.

His grandparents did so out of necessity; later generations followed out of respect for tradition.

At home, Toups spent hours in his grandmother’s kitchen—the meeting place, where everyone hung out when there was food on the stove—and learned early on that Cajun gatherings were regular, rowdy, and above all, food-centric affairs.

Out in the field, he started as the helper, “essentially the duck dog,” holding the extra shells on hunting trips or bringing Dad the oyster knife at fish camp. Eventually, he picked up skills that became natural over time: catching crabs, cleaning fish, and shucking oysters.

When Toups started cooking professionally at 21, “I had a leg up because I could shuck oysters better than a lot of chefs,” he said, laughing.

His cooking today, though now sharpened by a decade of fine dining experience and defined by an individual sense of style, still draws upon and pays tribute to that upbringing.

“I’m super proud of my heritage, what my parents and my family and my culture has brought,” he said. “I see a lot of … dilution in culture nowadays. I see a lot of things get lost.”

Fortunately, some are being revived, too. Boucheries, which had largely died out with the modernization of butchery, are one of them.

Toups didn’t grow up with boucheries, but he and his family now hold a gathering about twice a year, feeding anywhere from 20 to 100 people at a time. He has a picture of one of his daughters, Poppy, when she was 3 or 4, handing out cracklins at her first one.

They’re not much like the boucheries of the old days, practical rituals born out of necessity. Traditions have evolved over time, and a modern rendition is “more of a party, a get-together,” Toups said, with plenty of whiskey to go around.

But it’s also “a remembrance,” he adds. Like raising your own chickens or stuffing your own sausage, and like cooking to honor the flavors and traditions of your ancestors, it’s something that can bring you closer to the land and to the past, to “have a little more respect for your ancestry and the things you have now,” Toups said.

“This is what we used to do, and we should remember that.”