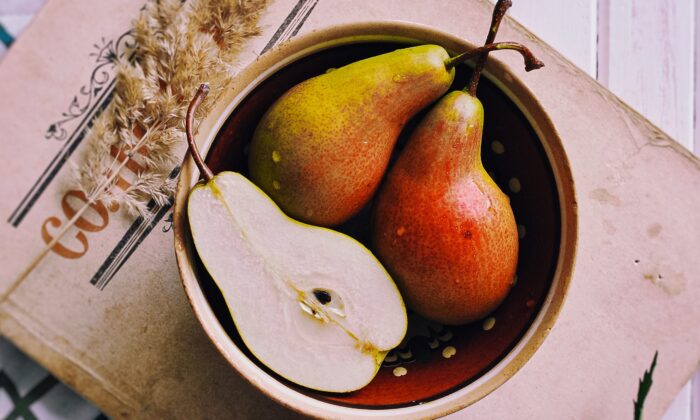 Scout farmers markets or greengrocers from September to December for a pear adventure, which is a most worthy culinary odyssey. (Tata Zaremba/Unsplash)
Recipes

Consider the Pear: How to Properly Ripen, Prepare, and Appreciate Fall’s Forgotten Fruit

Money may not grow on trees, but golden treasure does.

Though they are called green Anjou pears, the bell-shaped fruits glistening in the October morning sun on a 20-foot tree at Kiyokawa Family Orchards, in Oregon’s Hood River Valley, exhibit a topaz sheen that makes them look like foot-sized jewels.

“They’re on the sunny side of the tree,” Randy Kiyokawa explains of the pears’ golden blush. “Gives them a sort of glow, don’t you think?”

I do think. It’s not hard to imagine that their flavor matches their beauty. Pears are evanescent marvels with a range and complexity of tastes, textures, and colors that rival any other tree fruit.

But, barely noticed amid the annual new-apple frenzy that modern marketing has brought to U.S. grocery stores, pears are the overlooked gems of fall fruits. (In fact, “Gem” is the variety name for a 2015 introduction that industry figures hope will finally break the monopoly apples hold on the fall fruit paradigm.) Hood River is the capital of American pears, and I’ve come to Kiyokawa’s farm, on a lovely high bench beneath Mount Hood, to learn more.

Kiyokawa’s farm is at the upper end of the Hood River Fruit Loop, a 35-mile circle drive with 29 member retail and U-pick farms, about an hour east of Portland. Kiyokawa specializes in rare and exotic pears and apples one will never find at Safeway, or even Whole Foods.

On his 155 acres, and at the farm’s expansive roadside fruit stand, you’ll find two dozen different kinds of pears (and a dozen Asian pears, plus more than 100 apple varieties). Pears range from the standard tried-and-true Bartlett to the Abate Fetel, Chateau Royale, Packham’s Triumph, and Taylor’s Gold, all attractive and richly flavored. The names betray a European heritage that reveals pears’ popularity in the Old World.

The U.S. pear industry, which is almost entirely located in the Hood River and Wenatchee River valleys in Oregon and Washington, is relatively stable. While pear growers don’t get rich in autumn on highly hyped new varieties, they also rarely lose money—unlike in the fad-driven apple industry, which often finds bulldozers leveling thousands of acres of trees whose fruit has fallen out of fashion (Red Delicious being the most egregious example).

Pear growers, I observe, tend to favor the old axiom that, if it ain’t broke, don’t fix it. “Exactly,” Kiyokawa affirms.

Kiyokawa has hundreds of pear trees that are decades old—80 years, in some cases, something you’d almost never find in a commercial apple orchard, where a 25-year-old tree is a senior citizen. Bartletts, Anjous, Comices, Seckels, and more: Pears produce well, and sell steadily, though not feverishly, so in the ground they stay. For consumers, they can be easily stored at home for weeks or months. They’re beautifully sustainable, in other words.

But while these virtues carry great weight in Europe, not so here. On my way to Hood River, I’d stopped at a large Columbia Basin roadside fruit warehouse that had … two kinds of pears, Bartletts and Anjou. Years ago, in a small Slovakian village, I saw two dozen kinds at a cobblestone-square farmers market.

“I know,” Kiyokawa sighs about pears’ puny position in the U.S. fruit pantheon. “Americans just don’t have the patience to ripen a pear at home. We live in an instant gratification world.”

Almost all European pears are picked while still quite hard and need days or weeks indoors to fully ripen. And when they do, they must be eaten quickly, or they turn to mealy mush.

“Pears are a unique piece of fruit,” said Ashley Thompson, tree fruit specialist for Oregon State University’s Cooperative Extension Service. “They bruise more easily than apples. They ripen differently—top down and inside out, while an apple ripens all at once.”

Then, even when perfectly ripe, “you can’t eat a pear driving down the road without getting it all over your blouse,” she said. “Apples … a handy, hand-size snack, right?”

The latter impulse is what Thompson and other horticulturists hope the 2015 USDA introduction, Gem, will shift. Because its eating quality is good both when first picked, firm and crisp (like an apple) and after it softens a bit, Gem is picked, shipped, and bought ready to eat.

But change comes slowly to the pear industry, and Gem has yet to reach the heights its advocates hope for. Meanwhile, steadiness suits Kiyokawa’s four-generation family farming business, which dates back to 1911 and has a steady stream of happy customers. Autumn weekends find hundreds of consumers at his stand—and he ships fresh pears to appreciative chefs who value the complexity and practical advantages of pears for autumn desserts.

“Pear quality remains high throughout the year,” said Ben Stenn, executive chef at Celilo, Hood River’s premier fine dining restaurant. “The fruit stores so well, we enjoy it year-round. The most important thing is understanding proper conditioning of the fruit. A few days of gradual ripening and we have high-quality fruit almost whenever we want.”

Stenn’s favorite pear is Taylor’s Gold (also one of Kiyokawa’s favorites), which is perfect for his favorite pear recipe, a galette, in which the bright colors and firmness of the pears hold through the baking process. “We use puff pastry and firm pears that soften while baking in the oven. The pastry puffs up around the fruit and the juices cook down and concentrate the flavors.”

No oven is necessary to treasure a pear, of course. A classic European dessert is a platter of sliced pears with a robust cheese for flavor contrast.

“Does amazing scenery make food taste better?” I ask at 2,000 feet on the slopes of Mount Hood.

“Sure—if you’re out in the field eating it.”

I try out this proposition by carving off a slice of a Gem pear, the one Ashley Thompson is so keen on. In the distance above, 11,250-foot Mount Hood gathers the Pacific clouds that bring healing rain, crisp air, and blue skies washed by God. Hood’s water nourishes these pear trees; the long-day summer light burnishes their fruit; the clean air helps them thrive.

And the pears bring all these virtues right to our kitchen tables—if we’re willing to take the time to appreciate them.

How to Choose, Ripen, and Store Pears

As with apples, there are literally hundreds if not thousands of pear varieties … but a scant few are found in American stores. It’s best to scout farmers markets or greengrocers from September to December for a pear adventure, which is a most worthy culinary odyssey.

What do you do with them? Pear-cheese pizza (the version at Solstice Pizza in Hood River is hugely popular); salad with pears and pecans; tarts and galettes; poached pear desserts; a glazed pear compote for waffles: Dozens of recipes are at USAPears.org.

And if you have an unheated garage or basement where the temperature is below 50, but never freezing—or better yet, an actual root cellar—buy a whole box and bring a half-dozen up at a time to ripen. The traditional method is to wrap each pear in newspaper or something similar, thus fending off bruising, mildew, and such. That’s what Europeans have done for centuries, and it’s the reason many pioneer homesteads across America have century-old pear trees (and root cellars). Some varieties, such as Bosc, can last into next March.

Or you can store winter pears in the fruit bin of your fridge and bring a few out as needed.

How to tell when they’re ripe? It’s an art, but one way is to lightly press the flesh next to the stem. If it yields, it’s ready. (Why? Remember that pears ripen top down and inside out. If you wait for the widest bottom part to be soft, the top and insides might have already turned to overripe mush.)

Anjou: A classic European “hard” pear, these have a hint of clove, and are picked, shipped, and sold hard, so they must ripen at home for a few days up to weeks. Red Anjous are just a color variation.

Bosc: A classic European storage pear, the hardy russet skin keeps these fruits until well into winter. The white flesh is semi-sweet. Perfect to pair with cheese.

Comice: A very sweet, yellow blushed-red dessert pear. These are in your Harry & David Christmas boxes; ultra-fancy Comices are marketed as “Royal Riviera.”

Concorde: Ultra-sweet, these green storage pears don’t soften as much as Comice or Anjou.

Forelle: These green-and-red pears are almost tart, very crisp, and smaller than Bartletts and such.

Gem: This newer variety can be eaten right off the tree, and is thus fully ready when brought home from the store. Juicy and crisp, its flavor is not as intense as other pears. Kept at room temperature for a few days, they soften but retain their flavor.

Seckel: Small, crisp, tart, and often quite red, these also remain crisp even when ripe.

Eric Lucas
Follow
Eric Lucas is a retired associate editor at Alaska Beyond Magazine and lives on a small farm on a remote island north of Seattle, where he grows organic hay, beans, apples, and squash.