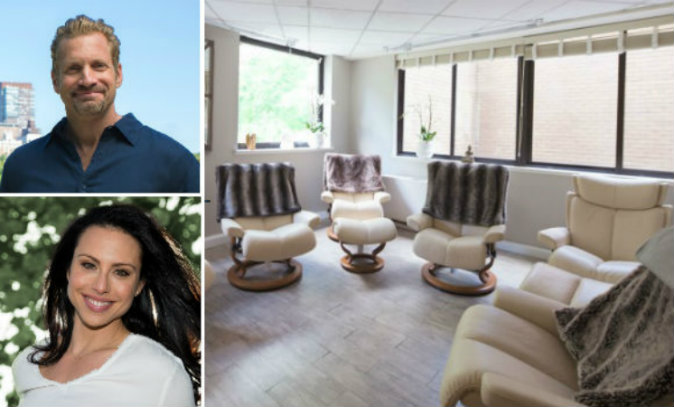 Dr. Gabrielle Lyon, osteopathic physician and Dr. Anthony Lyon, M.D. and medical director at the Ash Center. A treatment room at the Center. (Courtesy of The Ash Center)
Good to Know

As cases of chronic diseases continue to climb, so too does the number of people turning to alternative or complementary medicine to manage complex health issues.

Today, one in three Americans use some form of alternative medicine, such as acupuncture, probiotics, melatonin, chiropractic medicine, or yoga, according to the National Institutes of Health.

The increasing popularity of alternative medicine—defined as methods of treatment that are not a part of conventional medical training—has taken place amid growing discontent with the medical industry. Yet alternative medicine has also had its share of criticism for a lack of evidence-based treatments and unregulated practitioners.

We can throw medications at you, but if we start peeling back the onion and take the time, I bet we can figure out what’s really causing the issue.
— Dr. Anthony Lyon , medical director, the Ash Center for Comprehensive Medicine

Husband-and-wife team Dr. Anthony Lyon and Dr. Gabrielle Lyon are aiming to bridge this gap at their clinic, the Ash Center for Comprehensive Medicine. The center takes a unique approach to health, combining evidence-based healing traditions with modern Western medicine to help get to the root of illness.

To achieve this, the physicians put together an extensive team and network, including a holistic health physician, a nutritionist, a clinical psychologist, and more, aiming to address health from every angle. Patients range from professional athletes and military personnel to grandmothers and lifelong couch potatoes.

Anthony Lyon, a functional medicine physician and neurofunctional acupuncture specialist, says the comprehensive approach marries the art of treating people with the science of healing them.

“[We’re] always looking at the whole person, saying, ‘In how many ways do I really believe I can have a positive impact?'” he said.

At the Ash Center, named after founder Dr. Richard Ash and located on the Upper East Side of Manhattan, treatments reflect wisdom from both the old and new schools. High-tech services like cardiac imaging, thyroid ultrasound, and brain mapping meet holistic diagnostic tools like digestion analysis, breathing appraisal, and allergy and food sensitivity assessments. Often, the old and the new are combined in the same treatment, such as therapies like electric acupuncture, in which electricity is applied through the needles to strengthen the results.

‘Peeling Back the Onion’

The Lyons turned to their comprehensive approach after working in hospitals and seeing patients come in with the same conditions over and over—chronic neck and back pain, gastrointestinal problems, immune system deficiencies, chronic fatigue, stress, and anxiety, as well as people questioning their choices and direction in life.

The medications were managing the symptoms but not addressing and fundamentally curing the illness. Anthony Lyon, who formerly practiced classical family medicine at hospitals in Louisiana and Long Island, saw dozens of patients a day for around 10 minutes each; the system didn’t give him enough time to really understand and diagnose a patient, he says.

“I realized a couple of years into being an attending [physician] that I didn’t have what I needed in my toolbox to really meet the needs of what I saw around me,” he said. “So that’s what I went looking for. I had to relearn how to address and assess the human body.”

Often, the old and the new are combined in the same treatment, such as therapies like electric acupuncture.

Gabrielle Lyon, an osteopathic physician who completed a residency in family medicine in Long Island and a research fellowship at Washington University in St. Louis, said she realized that a new approach was needed when she saw how many diseases had the same fundamental cause—one that was often not being treated.

“Diabetes, hypertension, obesity—they all manifest [differently] but the underlying cause may be inflammation or impaired immunity,” she said.

“We can throw medications at you, but if we start peeling back the onion and take the time, I bet we can figure out what’s really causing the issue,” Anthony Lyon said.

At the center, the Lyons use much of what conventional medicine has to offer—antibiotics, medication, and precision testing in the in-house lab. But they also try to fill in where modern health care systems often fall short: spending more time on diagnosis, personalizing care, encouraging prevention, and helping patients make lasting lifestyle changes.

“We bring the best of Western medicine with more comprehensive nutritional sciences, more holistic approaches, getting to the root cause—whether it’s gut inflammation, food sensitivities, and so on,” said Gabrielle Lyon.

“We really get to know our patients. It’s about who they are, it’s about what makes them tick.”

But she is also quick to acknowledge that “natural” approaches aren’t effective in every situation, which is where conventional medicine comes in.

“You really need to look at the person,” she said. “There are some cases where it would be irresponsible to treat them with herbs. So if someone has Lyme disease, and it’s really severe, it’s crossed the blood/brain barrier and they’re having neurological symptoms, why would you not treat that with medicine? You have to be responsible.”

Despite the fact that conventional and complementary medicine are often pitted against each other, Anthony Lyon sees them as meant to be used together, balancing each other’s strengths and weaknesses.

“I think what’s so exciting about today is that we can go back, get the best from 1,000 and 2,000 years ago, combine that with the technology we have, and that’s yet another way of getting results,” he said.

He’s seen an explosion of interest in integrative medicine in the past 10 years, from both patients and medical practitioners. He estimates that conferences he attended five years ago, for example, have five times as many attendees today.

Departments on integrative methods have also been popping up around the world, including at institutions like Harvard University and the Mayo Clinic. Universities and colleges are increasingly offering courses and certification programs, and the World Health Organization has called on countries to better regulate alternative methods so that they can play a bigger role.

Anthony Lyon says he’s encouraged by the potential he sees for improvement in both the health care system and in people’s lives. As patients become ever more educated about their health, he sees them as increasingly active participants in their own care.

“I think it’s a really, really exciting time to be involved in medicine,” he said.

“Practitioners are looking for [effective approaches], they’re dissatisfied with the experience they’re having. They want more, patients want more.”