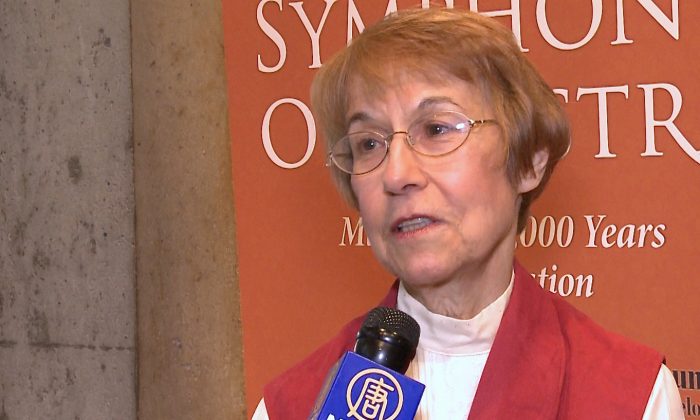 Composer and oboist Elizabeth Raum was among this appreciative audience. The former principal oboist with the Regina Symphony Orchestra was not shy about expressing her high opinion of the performance, the first of the orchestra’s 2015 tour in about a dozen cities in North America this fall.

“It was quite spectacular I must say, and I’m overwhelmed by the quality of the musicians—they are wonderful,” Ms. Raum said.

Prior to joining the Regina Symphony Orchestra, Ms. Raum played principal oboe for the Atlantic Symphony Orchestra in Halifax, N.S. She is also a prolific composer and was awarded the Saskatchewan Order of Merit for her musical accomplishments.

She noticed that she wasn’t the only one enchanted with the performance, which features a Western orchestra playing the foundation along with traditional Chinese instruments leading the melodies.

“I think the audience was overwhelmed too. I don’t think I’ve ever seen two standing ovations and two encores like that, and I think it would have gone on but the conductor left.”

As one of the finest oboe players in Canada, it was not unexpected that she would be paying attention to Shen Yun’s oboist, Yang Shen.

“The oboe player was especially excellent. Since I’m an oboe player, I could appreciate it all that much more,” she said. “And the brass, too. Everything was just so perfect, that’s what I noticed. A very, very well-trained orchestra.”

“I especially like the pipa and the erhu within the orchestral sound. It’s a fascinating sound,” she added.

The erhu is China’s two-string violin, a versatile instrument with a history of over 4,000 years that’s capable of conveying a broad range of emotions.

The pipa, or Chinese lute, has four strings and is regarded as one of the most expressive of all traditional Chinese musical instruments.

Ms. Raum very much enjoyed the combination of classical Chinese and Western instruments.

“It’s very, very tuneful, and what sprang to mind was that it’s very evocative.”

She was also impressed by the vocalists, who sang Chinese lyrics using bel canto operatic technique. “They were really fine. Excellent vocalists,” she said.

As a composer of classical music and an orchestral musician, Ms. Raum had high praise for conductor Milen Nachev as well.

“He was terrific. I would love to play under him. He was right on top of it all. And he looked like he really appreciated the orchestra, which as an orchestral player we appreciate,” said Ms. Raum.

“When you’re playing, you’re the one that’s heard and the conductor’s the one up front, so when he notices that what you’re playing sounds good, that makes you happy.”

Ms. Raum said that she could tell the musicians were happy. “They looked happy and they were just so together. It is such a fine orchestra.”

Following in her mother’s musical footsteps, Ms. Raum’s daughter, Erika Raum, is a concert violinist. As such, Ms. Raum said she has a particular familiarity with that instrument and some of the Western compositions featuring the violin that the orchestra played besides Shen Yun’s original compositions.

She also had warm praise for violinist Fiona Zheng.

“The violinist was spectacular. She was so good.”