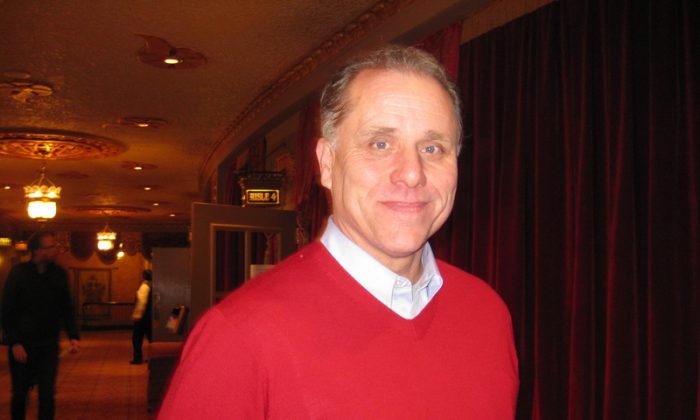 “It’s very good. I enjoyed seeing the different stories that are being presented and the performers are very good,” he said.

Mr. Edwards praised the New York-based Shen Yun for the stories taken from a treasure trove of heroic legends, myths and China’s beloved classics to portray the country’s history.

“I think it is interesting to see how they tied some of the stories to the culture—they have done a good job with that.”

Classical Chinese dance has a history of thousands of years, sharing a common ancestry with martial arts, reads the Shen Yun website. Its dramatic jumping, spinning, and flipping techniques are just part of the vast repertoire of movements that make classical Chinese dance one of the most demanding and expressive art forms in the world.

“I am impressed with the choreography of it and the colors are spectacular as well.”

Projected behind the dancers, the hi-tech images lift the stage and set it amidst blossoming landscapes, deep forests, Mongolian grasslands, or celestial paradises. Hundreds of hand-made costumes of every hue set the stage alight.

“I think just the rich history and the fact that it is such a very old civilization … also there is some warmth as well. When you see one of the particular scenes, it makes me think of issues, maybe a village type theme.”

Mr. Edwards could appreciate the universal themes in the stories. Whether set in the past or in contemporary China, every dance embodies traditional Chinese values, reads the website. “Ideals of loyalty, filial piety, and veneration for the divine are cherished and celebrated. Heroes are extolled for their compassion and tolerance as much as their courage or determination when facing adversity.”

“I can see that it is obviously what they’re showing, that has been part of the civilization from the beginning,” Mr. Edwards said.

Reporting by Teresa You and Raiatea Tahana-Reese