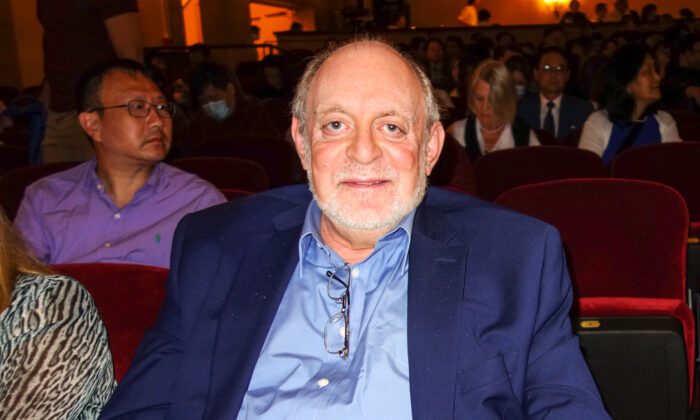 Stan Adler at a Shen Yun performance at The Palace Theatre in Stamford, Conn., on July 25, 2021. (Ivan Pentchoukov/The Epoch Times)

STAMFORD, Conn.—The head of a marketing firm, a financial advisor, and the owner of a real estate company lauded Shen Yun Performing Arts after a full-house performance at The Palace Theatre on July 25.

“The choreography is lovely. The costumes are spectacular. The music is creative. And the storytelling is very well done,” said Stan Adler, founder, chairman, and creative director of Adler Branding and Marketing.

“The way the costumes are used to interpret the dance is spectacular and the precision of the dancers is remarkable. You don’t see anyone out of step and I have a good eye,” he added.

Traditional Chinese Culture Shows the Same Values We All Share

Arthur Mocabee, a financial advisor, attended the performance with Gloria Gibney, a real estate broker and owner of a commercial appraisal business. Mocabee and Gibney were both impressed by Shen Yun’s portrayal of China before its traditional culture was destroyed by communism. Shen Yun, with its performances that show “China before communism,” is based in New York.

“It’s a shame that China is predominantly communist. But I’m sure that there are a lot of Chinese in China that don’t appreciate it, and would much rather have this [traditional] culture thrive than the communist culture, for sure,” Mocabee said.

“And I think, as an American, if this culture survived, which it obviously has, but if it had prevailed, China and America would enjoy a great relationship,” Mocabee continued. “It presents a part of China most Americans don’t understand, and that if they did, they’d think that there would be no need for armies on either side. It shows that China has got the same values as everybody in the world: love, humane treatment, fairness, compassion.”

Gibney was touched by a dance piece portraying the persecution of the traditional Chinese spiritual practice Falun Gong, including the murder of imprisoned practitioners for their vital organs for profit. Gibney said she appreciated that the performance made “people aware about the organ harvesting, which is so horrendous.”

“Everyone in our world should stand up against communist China for that one issue alone, forget all of the other terrible things they do, that alone is just not acceptable,” Gibney said.

Uplifting for the Spirit

William Karchere, the owner of Platinum Property Realty, said he was amazed by Shen Yun and described it as “beyond expectations.”

“The synchronization of the dance is just overwhelming. It is just perfect. You can tell that this was a tremendous amount of preparation.”

Referring to Shen Yun’s revival of classical Chinese dance as an art form, Karchere said he learned a lot from the performance that he couldn’t have otherwise.

“It is actually teaching us something that we know little or nothing about. So it is a win-win. Not only is the performance overwhelmingly professional and beautiful, but the message that comes from a place like China, that we would not know and understand, is very clear to us,” Karchere said. “It is very touching.”

Karchere said he was uplifted by the performance, especially considering the difficult year due to the CCP (Chinese Communist Party) virus, commonly known as the novel coronavirus.

“We were personally affected by [the pandemic]. We had a tough time with it. So seeing something like this is uplifting and beautiful,” Karchere said. “I will walk away with an uplifted spirit and tell other people to come and see it. It will carry us forward with hope … a good feeling inside.”