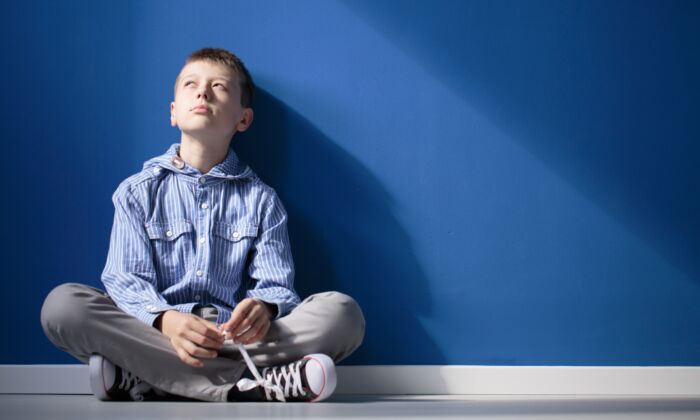 In the 1970s, autism affected fewer than 1 in 10,000 children in America. Today, that number has reached 1 in 54 children. (Photographee.eu/Shutterstock)
Mind & Body

Parents, experts voice concerns about aluminum and other toxins, especially in vaccines
By Jennifer Margulis

Nicole Johnson, a mom of two and a lawyer, started noticing that her son was having some developmental delays when he was about 12 months old. Johnson, who lives near Athens, Georgia, had had a healthy pregnancy and an uneventful delivery. So at first, she wasn’t too worried. But when she realized that James stared at his hands for unusually long periods of time and stopped saying the words he once knew, she grew increasingly concerned. By the time James was 3 years old, he was diagnosed with autism and a developmental pediatrician told Johnson that James would benefit from both speech and occupational therapy.

Johnson was baffled. No one on either side of the family had ever been diagnosed with autism. So she and her husband, a medical professional, began to research the potential environmental factors that might have contributed to their son’s condition. She spoke to friends and colleagues, read peer-reviewed scientific articles, and poured over books written for both medical experts and laypeople.

“We’re still researching to this day, all the time,” Johnson said. “We just want to understand what happened and why.”

After thousands of hours of research, a potential culprit emerged: aluminum, an adjuvant in many vaccines.

Adjuvants are added to vaccines to help trigger the body’s immune system. The critical part of the vaccine is often a protein of the germ or virus the vaccine is meant to protect against. The adjuvant helps stir an immune response that the body fixates on this protein.

Could exposure to aluminum, which is used as an adjuvant in several childhood vaccines as well as in a host of other medical products, have caused or contributed to James’s autism?

The ‘Real’ Rise in Autism

In the 1970s, autism affected fewer than 1 in 10,000 children in America. Today at least 1 in 54 children are diagnosed with autism, a condition that is four times more common in boys than in girls, according to the CDC. In New Jersey, one of the states with the highest rates of autism, an estimated 1 in 32 children has autism.

There has been much debate about the rise in autism: Are these autism rates “real” or have changes in diagnostic criteria and more recognition of the disease artificially inflated current numbers?

In his book, “How to End the Autism Epidemic,” author J.B. Handley points out that autism traits, including early onset of symptoms, deficits in language development, an inability to relate to others, and an inability to make eye contact, haven’t changed.

“Despite what you may have read, the definition of autism has remained remarkably consistent over time,” Handley insists. Handley, an investment capitalist and graduate of Stanford University, analyzes the criteria used to determine rates of autism from the 1970s and ’80s and concludes that it is unlikely, if not impossible, that changing criteria, or even the inclusion of Asperger’s—a less severe form of autism—under the umbrella of autism spectrum disorders—can account for the steep increase in rates.

A 2014 study published in the peer-reviewed journal Environmental Health scientifically examines the dramatic rise in autism as well as its potential causes. The author, Dr. Cynthia Nevison, a research scientist at the University of Colorado–Boulder who specializes in earth and environmental science, found that 75 to 80 percent of the rise in autism is real.

“Diagnosed autism prevalence has risen dramatically in the U.S. over the last several decades and continued to trend upward as of birth year 2005,” Nevison explained in the conclusion of the study. “The increase in autism is mainly real, with only about 20-25 percent attributable to increased autism awareness/diagnoses.”

At the same time, Nevison found that during the time that autism rates have been increasing, children’s exposure to most of the top 10 most prevalent toxic compounds, including highway emissions and lead, has remained flat or even decreased.

However, three toxins in the environment that have been increasing alongside the rise in cases of autism are aluminum, glyphosate, and polybrominated diphenyl ethers (flame retardants found in consumer goods like furniture and textiles). According to Nevison, it is these toxicants that may be contributing most to the increasing rates of brain challenges among America’s children.

How are children like James being exposed to aluminum? Aluminum is one of several different adjuvants used in vaccines. Adjuvants are added to vaccines to provoke a stronger immune response. If aluminum is excreted successfully, it is not thought to be harmful. But aluminum that stays in the body can be toxic to the brain.

According to the Food and Drug Administration, premature babies that received more than 4 to 5 micrograms of aluminum per kilogram of weight per day (in the form of intravenous nutrition) suffered from aluminum-induced central nervous system and bone toxicity.

Exposure to aluminum compounds—found in hepatitis A, hepatitis B, DTaP, Tdap, Hib (Haemophilus influenzae type b), HPV, and pneumococcus vaccines (but not in the MMR vaccine)—has increased along with the number of childhood vaccines administered since the late 1980s. In fact, according to Dr. Robert Sears, a pediatrician based in Southern California, some vaccines on the childhood schedule contain as much as 650 micrograms of aluminum.

Aluminum expert Dr. Christopher Exley, who worked at Keele University in Staffordshire, England, for 29 years, has found evidence that aluminum can infiltrate brain tissue by crossing the blood-brain barrier and meninges. Post-mortem research shows that the brain tissue of people with autism contains higher than normal levels of aluminum. Exley believes that aluminum overexposure may play a causative role in autism.

Other research conducted by Exley and a team of scientists and published in April found that the amount of aluminum varies widely from one vaccine dose to another, and the amount of actual injected aluminum may be much more or somewhat less than what the manufacturer states. So, we are not certain exactly how much aluminum any given child is exposed to.

“Science shows that autism is caused by an immune activation event,” insists J.B. Handley in “How to End the Autism Epidemic.” “The adjuvant in vaccines–aluminum adjuvant–can activate the brain’s immune system and is more neurotoxic than previously realized.”

Handley, himself the father of a non-verbal young man with autism, underscores the urgent need for more research. “Aluminum’s newly discovered role in triggering immune activation events in the brain changes everything about the science of vaccines and autism, because it establishes a clear biological basis for how a vaccine can cause autism.”

Dr. Stephanie Seneff, a senior research scientist at the Massachusetts Institute of Technology in Cambridge, Massachusetts, has been studying the possible causes of autism for more than a decade. As Seneff explains in her 2021 book, “Toxic Legacy,” her extensive research has led her to conclude that human exposure to glyphosate is another undeniable factor in the rise of neurological disorders among children.

Glyphosate, the main ingredient in Roundup, is a popular weed killer that is used both in large-scale agriculture and in people’s backyards. Glyphosate has been found as a contaminant in many of our foods, including several breakfast cereals and even in organic honey. The World Health Organization has deemed glyphosate a probable carcinogen.

One vaccine in particular, the MMR, a live-virus vaccine given to protect children against measles, mumps, and rubella, had levels of glyphosate that were 25 times higher than the other vaccines.

Seneff argues that glyphosate amplifies the toxicity of other chemicals. In addition to destroying beneficial gut bacteria needed by the body to process food, absorb nutrients, and have a healthy immune system, glyphosate also makes other chemicals such as aluminum substantially more toxic. She believes the synergistic exposure to glyphosate and other chemicals may be doing far more damage than any single exposure.

A 2019 study from JAMA Psychiatry uncovered a link between moms’ use of acetaminophen (the main ingredient in Tylenol) during pregnancy and an increased risk for ADHD and autism in their children.

Susie Olson-Corgan, a health coach and activist based in Washington state, believes that Tylenol contributed to her son’s regressive autism. As Olson-Corgan described to me (and later published in an article on my website), her son seemed to be developing typically until his 1-year checkup. But after that doctor’s appointment, Liam developed a high fever and was inconsolable. Following her doctor’s advice, Olson-Corgan alternated between giving him Motrin and Tylenol to bring down the fever and make him more comfortable.

After that episode, Olson-Corgan says, Liam was never the same. He had an even more severe reaction following his next round of vaccines and Olson-Corgan says she rushed him to the emergency room where he was given oxygen, steroids, antibiotics, Benadryl, and Motrin. After that ER visit, Liam stopped making eye contact and interacting with others altogether. A teenager now, Liam toe walks, gets agitated easily, and cannot speak. Olson-Corgan believes the combination of acetaminophen and vaccines caused her son’s severe autism.

As their concerns about the safety of the childhood vaccine schedule grew, the Johnsons paused their son’s routine vaccinations. But then, when James was 9 years old, Johnson says their pediatrician shamed her, warning her about the dangers of infectious diseases, and scolding her about her responsibility to protect others. The doctor insisted it was time to get James caught up on his shots.

Against her better judgment, Johnson relented. On a Friday afternoon, James was administered one vaccine to protect him against three diseases: diphtheria, tetanus, and pertussis (whooping cough).

“His arm swelled like crazy,” Johnson said. “It was like there was a brick on the side of his arm. He was miserable for days. He ran a low fever over the weekend. I took back to the pediatrician on Monday. After that he began to have more behavioral problems at school. It set us all back.”

While millions of children will have little or no reaction to their vaccines, which many will point to as testimony to their safety and efficacy, there are also thousands of people with stories like the Johnson’s, parents who watched a rapid change in their children’s behavior soon after vaccination. These reports are frequently denied or dismissed, making it difficult for researchers to identify patterns in those who have bad reactions to see if there is a way to ensure those who can gain the benefits of vaccination do so while those who may be at risk can make a more careful decision.