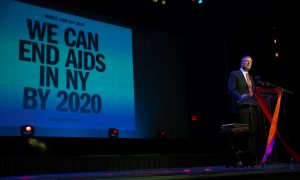 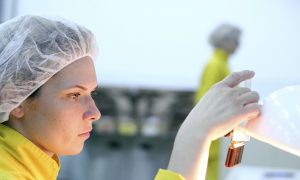 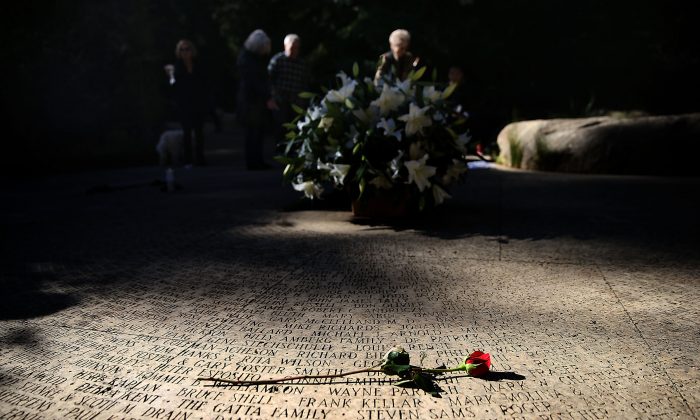 A flower lays on the engraved names of AIDS victims at the National AIDS Memorial Grove in San Francisco, Calif., on Dec. 1, 2015. World AIDS Day has been observed on Dec. 1 since 1988, and is dedicated to raising awareness of the AIDS pandemic caused by the spread of HIV infection, and to mourn those who have died from the disease. (Justin Sullivan/Getty Images)
Health News

Would a Cuban approach to combating HIV/AIDS have saved the lives of more than 30 million people?

The Failure of HIV/AIDS Prevention and Strategies

UNAIDS has been directed by an African since 2009. This gave new hope to Africans.

But although the global mortality has decreased from 2 million in 2005 to 1.2 million in 2014, we are still faced with an unacceptable situation affecting particularly the African continent. The international organizations combating HIV/AIDS continue to ignore the particular sociocultural characteristics of the continent, where being HIV positive is still something to hide, even to your family and close friends.

Since 1988 the world has observed World AIDS Day on Dec. 1. On these occasions reference is often made to the failures of the international community to bring AIDS to a halt—especially in sub-Sahara Africa. This year’s campaign theme is On the Fast-Track to end AIDS. Yes, there is certainly a need to speed up, but more so with new strategies, as will be argued in this article.

The emphasis on a curative approach rather than on preventive measures aiming at modifying behaviors of contaminating individuals at the community level has played well into the hands of the pharmaceutical industry.

For more than 20 years, pharmaceutical companies blocked access to lifesaving drugs for millions of people, especially in Africa, because they were afraid that allowing Africans to import generics drugs would set a precedent that would ultimately diminish their own profits. As long as the 20-year patent was effective, a full battery of lifesaving drugs could easily cost $15,000—a price well beyond the affordability of most patients in low- and middle-income countries. Why bother to know your HIV status if the drugs to save you are not affordable anyway?!

Why bother to know your HIV status, if the drugs to save you are not affordable anyway?!

The Right of the Community to Know

Most people who have died of AIDS have died because of the “human rights” message to governments and health organizations: an HIV positive person has the right to keep his status a secret even from his spouse.

Policies and practices in terms of combating the AIDS pandemic assume that AIDS is an individual and private matter. By having placed the AIDS discussion in the context of human rights, it has become virtually impossible to question the principles guiding projects that combat HIV/AIDS. It seems to be assumed that once people realize they are infected, they will take steps not to infect others.

However, sexual behavior is seldom based on reason alone, if at all. It is obvious that what HIV/AIDS project planners consider a private concern has many and serious public consequences in cultures where procreation and community are more important for the individual identity than concerns about HIV/AIDS risks.

Obviously, the current practice of defending confidentiality and privacy with regard to testing only makes it more difficult to even cut through the stigma of HIV/AIDS. These sentiments continue to prevail in most African countries.

When I accompanied the late first lady of Gabon to a meeting in Geneva for African first ladies, an American employee introduced himself: “Hi, I am Bill. I am HIV positive.”

We are still far from such openness being common.

The Human Rights Declaration states, “The family is the natural and fundamental group unit of society and is entitled to protection by society and the State” (article 16:3). Article 29 of the Declaration states further, “In the exercise of his rights and freedoms, everyone shall be subject only to such limitations as are determined by law solely for the purpose of securing due recognition and respect for the rights and freedoms of others and of meeting the just requirements of morality, public order, and the general welfare in a democratic society.”

In relation to HIV/AIDS, the question would be whether limiting an individual’s freedom by depriving him of his right to confidentiality and by enforcing HIV screening would violate Article 29.

The response lies in the balance between the individual’s freedom and other human rights principles. An example is the principle that an intervention should serve the “best interest of the child,” which continues to be the guiding principle for UNICEF. It may be important to note that back in 1948, when the Human Rights Declaration was adopted there were no representatives from Africa among those preparing the declaration.

The Declaration is closely associated with the concept of democracy. African governments have carefully followed the approach recommended by UNAIDS and the World Health Organization (WHO) to avoid falling into the group of totalitarian states. This has prevented HIV/AIDS from being treated as an epidemic. Rather it continues to be considered as an individual disease.

If it were considered an epidemic instead of an individual disease, HIV/AIDS would have met with regulations to stop its spread.

As an epidemic, HIV/AIDS has far reaching consequences and would have met with regulations as those which were introduced to protect humanity against the bird flu (H5N1), which from its inception until 2007 had (only) claimed 216 lives out of 349 cases. With Michel Sidibé, a Malian, at the helm of UNAIDS since 2009, this U.N. organization has become the strongest advocate of a so-called human rights approach to the detriment of the lives of millions of innocent people.

Civil societies, rather than governments, became natural partners to UNAIDS in the fight against AIDS.

Cuba is the only country in the world that has legalized compulsory HIV testing.

A few years ago, when Cuba had a population of 12.5 million people in Cuba, it was estimated that there were less than 5,000 people living with HIV.

To put the achievements of Cuba into perspective, it serves well to compare it with Jamaica’s population of about 2.5 million people with 40,000 HIV positive people. Jamaica made consistent efforts to implement the guidelines for combating HIV/AIDS as prescribed by the international community.

Extrapolating from the Cuban and Jamaican data and assuming their validity, a simple arithmetic calculation suggests that if the Jamaican government had implemented compulsory HIV screening, it could have had less than 1,000 HIV carriers.

It is plausible to assume that millions of people killed by AIDS could have been saved if U.N. institutions did not insist on confidentiality for HIV positive carriers.

It is very plausible to assume that the millions of people killed by AIDS related diseases could have been avoided, if the U.N. institutions led by WHO and UNAIDS, followed closely by UNICEF, UNFPA, and UNDP, had not insisted that the medical profession maintain confidentiality regarding HIV positive carriers to the detriment of family, community, and nations.

Toward an AIDS-Free World

Just as UNAIDS has a professional and moral responsibility to give priority to policies and interventions serving the best interest of the family and the community, governments have a responsibility to protect communities and the very state itself from the adverse impacts of HIV/AIDS on economic and social development.

The United Nations must support African governments to be courageous enough to take a different view of the Universal Declaration of Human Rights and consider it from the perspective of the family and the community, and implement HIV/AIDS intervention strategies accordingly.

Today, when women account for more than half the total number of people living with HIV in sub-Saharan Africa and HIV/AIDS is the most frequent cause of death among people under 20, it is hypocritical to take a narrow view of democracy and human rights, equalizing them with individual freedom of choice, only because it may serve market interests.

Kristian Laubjerg worked for the Danish Development Agency and UNICEF. In 2008, he established the first home-based health care association in Senegal providing care to people who lost their autonomy. He received a Ph.D. in social psychology from Copenhagen University in collaboration with Glasgow and Dar es Salaam universities.