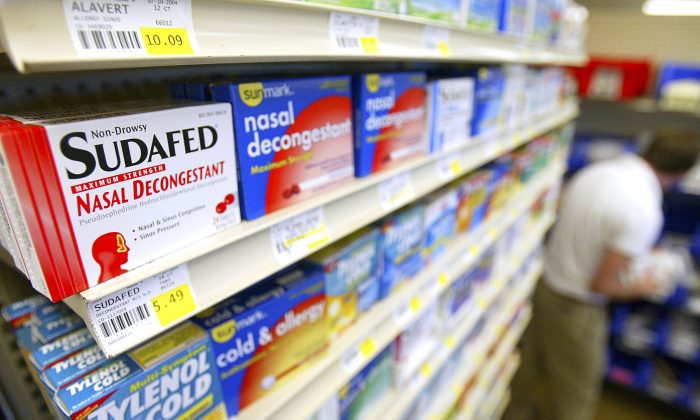 Cold Medicines Don’t Work and Could Be Harmful for Children, Experts Warn

Medicines used in the treatment of blocked noses should not be given to children, experts have warned.

Researchers have argued that decongestants containing antihistamine should never be given to children under the age of 6 and they recommended caution for those under 12.

They said that medical professionals should advise children that colds will usually clear up on their own.

They said while decongestants do have some effects for adults, there is no research proving they work for children.

Children suffer more colds than adults in a year, around six to eight, whereas adults only get two to four, according to the researchers.

Decongestants containing antihistamine—drugs that treat nasal allergies—can cause drowsiness or gastrointestinal upset for children, the researchers said. And in very young children under the age of 2, they can even cause convulsions, rapid heart rate, and death, they said.

The authors wrote that if parents are concerned about their child’s comfort they can use saline nasal irrigations or drops, although they may not work.

“Vapor rub may relieve congestion but can cause skin rashes,” they wrote. “Other treatments, such as steam, humidified air, echinacea, or probiotics, are either not effective or have not been studied in children.”

They advised doctors to “explain that a cold is distressing but should pass in 7-10 days.”

For adults with uncomfortable symptoms, the authors said that decongestants and antihistamines are the best choice, although their effect is limited and can have sedative side effects. They said nasal decongestants should be used for a maximum of three to seven days.

They added, “Long-term use of nasal decongestants is known to lead to chronic nasal congestion.”

Colds are mainly caused by viruses and mostly clear up without medical intervention.

The scientists said many over-the-counter treatments for the common cold claim to alleviate symptoms such as runny nose and congestion, but there was limited evidence of their effectiveness.

Natural remedies for the common cold such as garlic, Chinese medicinal herbs, eucalyptus oil, honey, ginseng, and increased fluid intake were also assessed by the researchers and found to either have varying results or no previous trials.

The scientists arrived at their findings by analyzing previous studies into the effectiveness of treatments for the cold and assessing whether the findings came out positively or not.

Although many patients may ask their doctors for antibiotics when they have a cold, studies have shown that they have no effect on the virus or its associated congestion.

Antiviral drugs, too, are ineffective against the cold, the authors found.

There are ongoing studies into traditional Chinese, Thai, and Indian herbal remedies, but none of them are expected to address their effects on nasal symptoms.