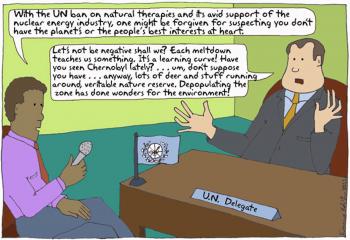 BY Louise McCoy
TIMEOctober 1, 2015
The cartoon partially refers to the Codex Alimentarius (Latin for book of food), which was established by the United Nations Food and Agriculture Organization (FAO) and the World Health Organization (WHO).

This commission is made up of government functionaries and international non-governmental organizations (INGOs) from different countries. Its job is to make general standards for labeling, hygiene, additives, and food safety for consumer protection, according to Codex.

One of the committees of this commission is the Codex Committee on Nutrition and Foods for Special Dietary uses (CCNFSDU), whose standards and goals have begun to arouse the public, which until recently had been relatively unaware of Codex.

Furthermore, the daily amounts of vitamins and minerals needed to sustain health were put at minuscule amounts because Codex looks at nutrients from the point of view of how much of a nutrient from all sources would be unlikely to lead to an adverse health effect. WHO and FAO maintain that such guidelines would “stop consumers overdosing on vitamin and mineral supplements.”

This view of supplements as drugs or as harmful substances raised red flags for the few who have heard of Codex.

Examples of Codex’s distance from the average health enthusiast are the low daily allowances of some widely used vitamins, such as a 60-milligram allowance for vitamin C—which many people take by the gram—and a 400-IU allowance for vitamin D. Many people have been found to have low blood levels of vitamin D, and physicians often prescribe vitamin D in doses of thousands of IU daily.

Among the INGOs represented at the November 2010 CCNFSDU meeting was the National Health Federation (NHF) based in the United States and with members in 19 other countries. The outspoken Scott Tips, Esq., was their delegate.

The Nutrient Reference Values (NRV) guidelines (similar to our daily allowances) were on the agenda.

The EU argued, with support from NHF, that the NRV guidelines were outdated, and science other than that used by FAO and WHO should be permitted. “Yet, the near-religious adoration of the FAO/WHO scientific consultations prevailed,” wrote Tips in Health Freedom News in the winter 2010 edition.

The push of Codex is to get all its members to accept a dumbed-down version of NRVs. Tips gave the following example: “… the inanity of deciding upon using the halfway point between tissue saturation by vitamin C and clinical signs of scurvy as the level (45 milligrams) at which the vitamin C levels would be set! So halfway between health and death was to be an acceptable NRV level?”

In this particular meeting, guidelines were broadened to allow countries to consider additional factors in setting their own NRVs, and the Codex’s already low allowances were to be put to a full re-review.

Codex Alimentarius includes allowable pesticides, GMO foods, irradiation of food, antibiotics, and growth hormones for animals used as meat. Its standards have been adopted by GATT, making it a trade commission, which has GATT countries scurrying to comply with its requirements although it was originally voluntary. 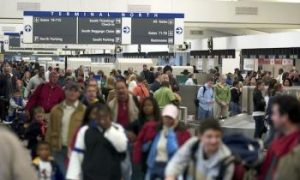