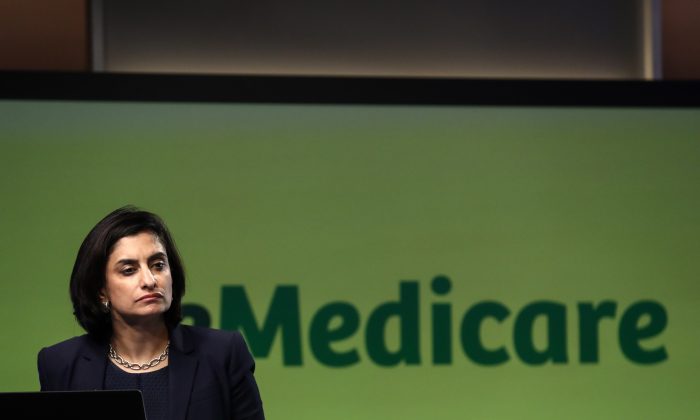 CMS Chief Says ‘Medicare for All’ Too Good to Be True

WASHINGTON—”Medicare for All” might sound too good to be true, which means it probably is, says Seema Verma, the administrator for the Centers for Medicare & Medicaid Services (CMS).

“As head of the agency that serves over 58 million Medicare beneficiaries, I deal first-hand with the challenges of government-run health care,” she wrote in a Nov. 2 blog post. “The answer to the skyrocketing cost curve is not greater government intervention, leading to the evisceration of the private insurance marketplace, but just the opposite: increase choices, unleash private competition, innovation, and lighten regulations on plans, doctors and providers.”

Health care as a “right” and “Medicare for All” became memes during the 2016 presidential campaign of Bernie Sanders’s (I-Vt.), and have become increasingly mainstream among left-leaning politicians. Medicare for All, also known as single-payer health care, effectively takes away employer-sponsored health care plans and the private health insurance industry, and replaces it with a single, government-run health insurer.

Four days before the midterms, Verma’s post challenges arguments made by Sanders and other Democrats that a single-payer health care system will lower costs, increase access to care, and make health care more affordable for those it was meant to serve—America’s elderly and those with disabilities.

Countering Sanders’s claims that single-payer health care will reduce overhead and administrative costs, Verma says the only reason Medicare appears to be more cost-effective than a private insurance company is that Medicare doesn’t have the resources to provide the oversight that the program needs. Less than one-fifth of a percent of Medicare’s 1 billion annual claims are reviewed for fraud, she says.

“Those advocating ‘Medicare for All,’ due to lower administrative costs, need to understand those costs are lower principally (or in part) because of an under-funded, inadequate system of review to detect fraud and abuse,” she wrote.

We review less than two tenths of a percent of the over 1 billion claims that Medicare receives a year. Given the scope and size of the #Medicare program, that is ridiculously low. #AHIPMMD

As for its cost to taxpayers, Sanders estimates Medicare for All would cost an additional $1.38 trillion a year, which is significantly lower than other estimates by economists.

According to Congressional Budget Office, total outlays for Medicare in 2018 are projected to be $707 billion.

Kenneth Thorpe, a health policy professor at Emory University and a health policy adviser in the Clinton administration, estimated in a 2016 study that the cost of Medicare for all would be $2.5 trillion a year. A study by George Mason University’s Mercatus Center put the cost increase at $32.6 trillion for the first 10 years, a breakdown of $3.26 trillion more per year.

“Imagine funding the rest of government, from defense to education, at a level 30 percent less than today, or imagine a $2.5 trillion tax hike,” Verma wrote, citing the Mercatus study, “because the cost of health care to the government would more than double.”

What both Sanders and Verma do agree on, however, is that drug prices are too high, especially compared to other countries.

Sanders has argued that if the government were the sole payer for health care, it would have almost infinite leverage when negotiating drug prices with manufacturers, and thus be able to drive down prices.

Under the current system, Verma says that wouldn’t be the case because the program is a “price taker” for drugs when it comes to Medicare Part B, which mainly covers drugs that are administered in a doctors office.

“What’s worse, Medicare actually fuels higher drug prices, by paying doctors and hospitals an add-on fee for drugs that is set at a percentage of the cost of the drug,” she wrote. “With this setup, it’s no wonder that prescription drugs represent Medicare’s fastest-growing area of spending.”

Last month, CMS proposed a rule that would peg U.S. drug prices to an international index of mostly developed nations, to bring down U.S. drug prices. CMS also proposed paying a flat add-on fee to health care providers instead of a percentage, thus removing the incentive for doctors to prescribe more expensive medications.

Again citing the Mercatus study, which estimates doctors would receive 40 percent less under Medicare for All, she predicts that it would create a shortage in doctors and longer wait times for basic services.

“Ask yourself why proponents of ‘Medicare for All’ are advocating such a radical reform of health care just five years after the full implementation of the Affordable Care Act (ACA), often referred to as Obamacare. It is certainly not because the ACA has worked,” she wrote. “‘Medicare for All’ is Obamacare on steroids.”