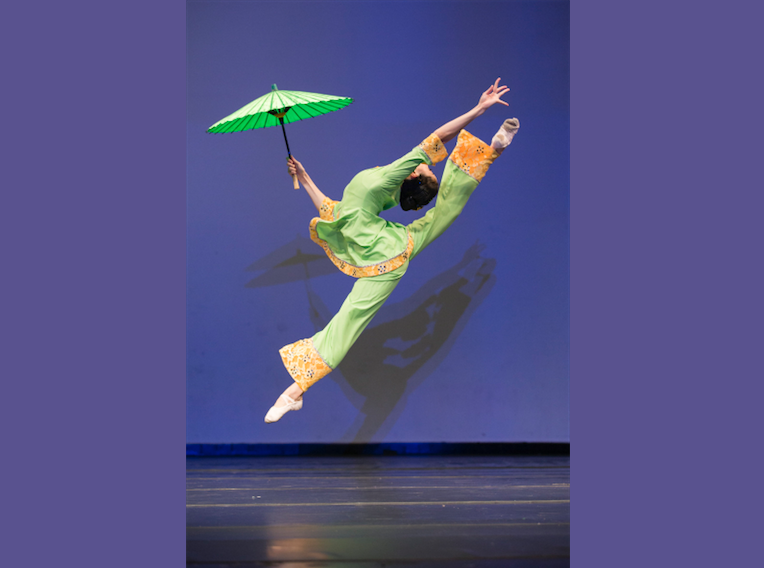 “I saw so many wonderful routines today. They were all perfect. It was very difficult to decide who would be the winner,” said Zhong Lee at the award ceremony. As president of the independent Chinese-language TV network, Zhong organizes a series of competitions that aim to revive traditional Chinese culture.

Kaidi Wu, who grabbed the silver award in the junior female division, portrayed a celestial fairy dancing with a piece of silk cloth. She threw the cloth up in the air several times and retrieved it while doing jumps and flips. All movements connected lightly and flawlessly.

Rocky Liao, gold winner of the adult male division, portrayed renowned poet Su Shi (1037–1101) of the Northern Song Dynasty as he visited the red cliffs. There a battle unfolded between warlords of the Three Kingdoms almost 2,000 years ago.

“The eyes were an important part of this portrayal because he was a poet who was trying to picture the battle: His eyes should be full of thought. The movements are intense and full of force. There were big swings to show the spirit of the heroes of the battle. The scene was set to be soft and beautiful, which was how it was portrayed in the poem,” said Liao, who conducted intensive research before choreographing the routine.

Sam Pu, from Feitian Academy of the Arts, who was given an honorary mention, said that coming up with a dance routine is often a process of learning about traditional Chinese culture. “I learned a lot from the ancient wisdom. It was a cultivation of personality and manners,” Pu said.

Audience members were grateful for the opportunity to witness traditional Chinese culture being presented in its original form in the West.

“It was like going back to the ancient times. … They did it so well, and I melted into the dances to the point where I found myself lost in the beauty of their performances. Finally, I see that the revival of Chinese culture is coming about,” said Ms. Pu, who had come from China to the United States a few days earlier on a business trip.

This year for the first time, NTD Television held the Asian preliminary of the competition in Hong Kong. The final round was held at the Tribeca Performing Arts Center in Manhattan and had a total of 41 contestants from the United States, Canada, Japan, France, and New Zealand.

Classical Chinese dance is one of the most ancient and complete dance systems in the world. It includes systematic training in different postures, movements, and techniques.

There are two key concepts in classical Chinese dance: form and bearing. Form refers to the coordination of intricate dance movements, such as a good balance between the direction of the eyes, the pose of the fingertips, and the body.

Bearing is the expression through dance movements of cultural heritage formed in ancient dynasties.

Tumbling techniques are often incorporated to demonstrate key components of form and bearing, but they are only considered to supplement to classical Chinese dance.

Unfortunately, this cultural treasure was almost destroyed by the communists during the Cultural Revolution, when dancers were allowed to exalt only communist figures and ideology on stage.

With the success of the global tours by New York-based Shen Yun Performing Arts, many in the worldwide dance community have had opportunities to witness the profundity and beauty of classical Chinese dance in recent years.