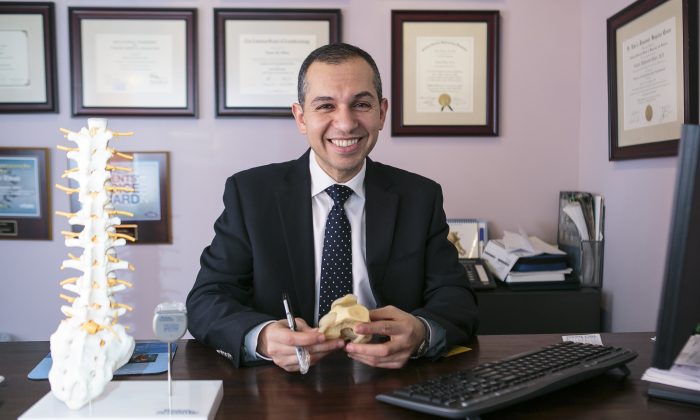 Pain physician Dr. Tamer Elbaz explains the causes of and treatments for knee pain at his office on the Upper West Side of Manhattan on Feb. 24, 2015. (Samira Bouaou/Epoch Times)
Mind & Body

Chronic Knee Pain Relief For Months At a Time, No Drugs

On the last day of Dr. Tamer Elbaz’s residency at St. Luke’s-Roosevelt Hospital in 2011, he treated a 53-year-old woman for chronic knee pain. Though she  had only seen Elbaz once, she remembered him for his pleasant bedside manner, and when the doctor began his private practice, she looked him up and became one of his regular patients at Pain Physicians NY.

Last week, Elbaz treated her with Iovera, a new FDA-approved treatment from Germany.

“I’ve been in the business for 10-plus years and Iovera is the best I’ve seen,” Elbaz said. “She came in this morning with a walker and went out dancing.”

So far in Manhattan, Elbaz is one of two physicians offering the treatment.

Iovera is a nonsurgical technology that delivers pain-stopping cold to kill the offending nerve. This stops the knee from sending pain signals to the brain. The pain returns months later, when the nerve grows back.

For chronic pain patients for whom surgery is not an option, treatments like Iovera enable them to resume daily life.

Iovera won’t work, he said, for people who have pain in the back of their knee.

Stopping the Pain Is the First Step

“The point [of these treatments] is to buy some time so that you can get back to normal activities—walk, exercise—and do the things that ultimately heal the body,” Elbaz said.

“Sometimes just stopping the pain is part of the healing,” he said. “It decreases stress responses to the pain and decreases inflammation, and helps you do more exercises to regain strength and range of motion.”

The stress response is the body’s natural reaction to injury or pain—it starts secreting hormones like cortisol and adrenaline, which help initially to control the pain. The problem is that with chronic pain, these hormones never stop coming and they prevent healing.

That’s why Iovera represents, to Elbaz, the best thing that’s happened to pain treatment in the last two decades.

“For 15 to 20 years there’s been no new treatment for knee pain. You get a steroid shot, or you do surgery,” he explained. “Along the way came lubricants—gel injections—but not everyone benefits from it. Iovera revolutionizes the whole thing. Almost everyone gets better.”

Common practice in pain medicine is to inject lubricants into the knee or to prescribe painkillers, which can become addictive and are easily abused. Although he does use painkillers, Elbaz said he prefers to treat with a combination of Iovera, lasers, radio frequency, and gel injections.

“We try to stay away from pain pills as much as we can,” Elbaz said. “My philosophy is to do something to get them going on their own without relying on pills. We try to get them mentally and physically rehabilitated.”

To this end Pain Physicians NY offers counseling, psychiatric services by referral, and physical therapy to fend off the terrible inactivity that allows the joints to get weaker, stiffer, and more painful.

A man went to see Elbaz five months ago after having been in pain and unemployed for three years following a car accident.

“He kept popping pills,” he said. “There was something small in his thoracic spine. I gave him one injection for a pressed nerve root. Now he’s not on medicine and he’s feeling fine. It was a life-changing event for him. I was very happy.”