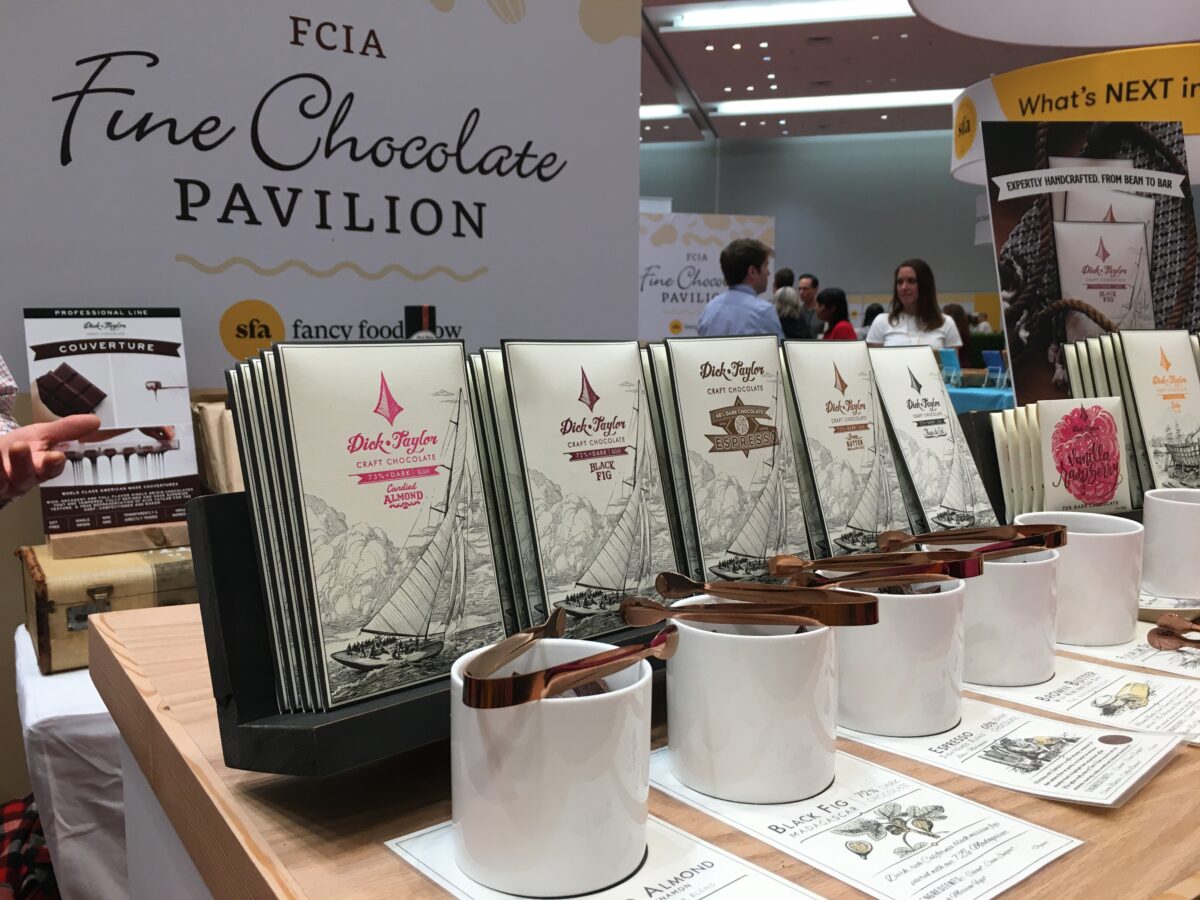 SAN FRANCISCO⁠—A bar of Madagascar dark chocolate infused with California black figs had a fragrant, fruity taste. Dominican Republic chocolate chunks had a flavor solid and rich. A sweet dried pineapple covered in dark chocolate made its way from the Philippines.

Exotic chocolates from all over the world participated in the Specialty Food Association’s (SFA) Winter Fancy Food Show at the Moscone Center in San Francisco from Jan. 19–21.

It was the first time the annual show included a chocolate pavilion, and the Fine Chocolate Industry Association (FCIA) brought 26 exhibitors for it.

“The thing that really brings them together is their passion for quality chocolate,” said Bill Guyton, executive director of the FCIA. “We want to move the bar. We want to help consumers expand their minds, and enjoy the wonderful flavors that chocolate can bring.”

Presenters got up on a stage in the pavilion to speak about the fine chocolate industry. Guyton said he noticed some new trends this year.

Dustin Taylor, owner of Dick Taylor Craft Chocolate, is based in Eureka, California. He and his business partner met in college and were carpenters for 13 years. Hence, their branding has a carpentry and boat-building vibe.

They stumbled upon a YouTube video on chocolate making and started making some at home as a hobby.

“Friends liked it—I [thought] we might as well try selling it to subsidize our hobby,” he said. “We ended up in a hardwood lumberyard making chocolate in a little 500-square-foot commercial kitchen, and those were the early days.

“Now we’re here, 10 years later, and we ship chocolate to all over the world, and we’ve won all sorts of awards, six different [Specialty Food Association sofi awards], and having a great time at it.”

Nadia Rizek is a fifth generation owner of Kahkow, a company that sources cacao beans from the Dominican Republic. The family-run business has been growing, fermenting, and exporting its beans since it was founded in 1905.

About 10 years ago, they decided to make their own chocolate bars, and the bars were a hit. So they opened their first shop in Brooklyn, called Kahkow USA.

In addition to selling chocolate, they educate people about chocolate-making.

“It’s an open factory space with a live feed of the farms in DR, so you can feel like you are inside a farm in the Dominican Republic,” said Rizek. “We want to make amazing chocolate for people to taste, but we also want to show the potential of these beans for chocolate-makers.”

Beyond Good in Madagascar

Beyond Good, formerly called Madécasse, prioritizes transparency in its chocolate-making process. The lemur on their packaging means that their farm is also providing the endangered species with a stable habitat.

“We are one of the only U.S. companies producing at the source in Africa. So we have a farm-to-factory, fully transparent, equitable sourcing from farm to factory,” said Ashton Pina, director of communications at Beyond Good.

“We work with a hundred farmers to grow and ferment and dry all our cocoa beans, which then get shipped to our factory in Madagascar.”

A lesser-known origin for cocoa beans is the Philippines. Malagos Chocolate has had its own farm since 2003 and a chocolate factory since 2012.

“We make it from scratch, so it’s a tree-to-bar chocolate,” said Rex Victor Puentespina, a cacao farmer and chocolate-maker.

Foodies could sample from the newest products of over 80,000 presenters in the exhibition hall.

The Italian company Loacker has released two new flavors of wafers: double chocolate and matcha green tea. Both flavors are squeezed between its thin and crispy wafers.

Biscuit-maker Hello Panda will have a caramel flavor available starting in April. The caramel inside the biscuit was subtle and creamy.

SoulBee Honey is selling powdered and flaky honey as natural sweeteners. The super-fine powder melts in your mouth and turns into a honey-like consistency.

“This is a do-it-yourself kit that has the almonds, the oil, and the seasoning in it. You add it, shake it, put it in the microwave for two minutes, and you have a nice, hot, fresh toasted almond,” said Christy Peterson, a Blüm sales representative.

Let Them Eat Candles, run by a mother of three sons, came up with an edible chocolate birthday candle that won’t melt onto itself.

“The wick is a short, paraffin-coated cotton. You light it … it lasts for about 55 seconds,” said Loree Sandler, owner of Let Them Eat Candles. “So you have long enough to sing and blow it out, make your wish. And then there’s a little piece of wick left that you pluck out, and then you eat the chocolate that’s left.”

Duverger’s Macarons, based in Southern California, introduced a new birthday cake flavor made with natural and organic ingredients.

“We use only vegetables, fruits, and spices for the color of the shells and we use only fresh ingredients to make the filling,” said Claire Duverger, owner of Duverger’s Macarons.