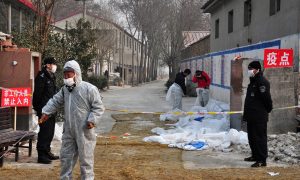 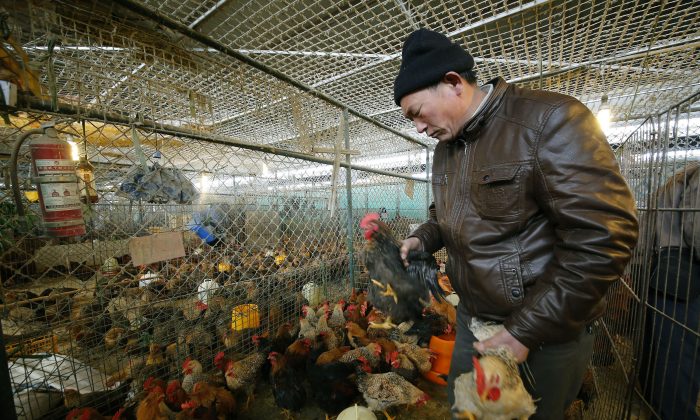 A vendor picks chickens at a wholesale poultry market in Shanghai, on Jan. 21, 2014. Chinese authorities confirmed on Jan. 27 that there have been cases of H7N9 spreading between humans. (AP photo)
China

The Chinese authorities on Jan. 27 acknowledged for the first time that they have discovered cases of human-to-human infection with the H7N9 bird flu, while remaining vague on the details in an attempt to prevent public panic.

In a short statement on Jan. 27, the authorities said that human-to-human transmission was recorded in eastern China’s Zhejiang Province. They do not specify the number of cases, nor the city in which they took place.

The H7N9 Joint Prevention and Control Office said the infection or infections took place under “particular conditions” and are “non-sustained transmissions,” meaning that it is not expected to spread from those incidents.

The case or cases in Zhejiang would be the first time that human-to-human transmission has been officially acknowledged by the authorities since H7N9, a new avian influenza, was first recorded in China in March 2013.

Experts at the China Center of Disease Control, however, said it was just a “special case,” and human-to-human transmission of H7N9 is not yet very widespread.

“The public has no need to panic too much,” said Xinhua, the mouthpiece of the Chinese Communist Party.

Zhejiang has a bad record with H7N9 infections: it has recorded 49 diagnosed cases and 12 deaths this month, the latest official report says.

A newly released “Treatment Scheme of Human Infection with H7N9 Bird Flu” by China’s Health and Family Planning Commission also now lists “limit and non-sustained human-to-human infection” as one of the ways in which the H7N9 virus may be transmitted.

More common transmission mechanisms include “infection through the respiratory tract, through close contact with secretions or excretions of infected birds, and through contact with the infected environment.”

Despite the authorities attempts at damage control in emphasizing the limited nature of human-to-human transmission, the news still came as highly unwelcome to the public. Many individuals posting on the Internet said they would avoid eating poultry, in order to protect themselves from contracting the virus. (Though it does not spread from the consumption of chicken meat.)

A large number of Chinese netizens have reported anecdotally that more people appear to be getting sick in comparison to years past.

“I have to let people know the truth. Very many people here in Harbin are sick, several times more compared to the same period in previous years,” remarked an anonymous netizen who said he or she was from northern China’s Heilongjiang Province. “There are both adults and children who have fevers above 40 Celsius (104 Fahrenheit). Many of them have developed pneumonia.”

Internet users post such comments anonymously because information about the spread of disease is highly controlled by the communist authorities, and Chinese citizens who disclose such information without authorization can be severely punished.

“They are not confirmed to have H7N9, but the truth is that there’s such a large scale of flu, cold, and pneumonia going on, and it has very strong infectiousness. Who can give us an explanation?” the post continued. “Even nurses and doctors are sick and having fevers. What should we people do?”

There is currently no established, effective medical treatment or vaccine against H7N9. Chinese health and disease control experts suggest people should wash their hands more often, exercise more, wear masks when coming in contact with poultry, and avoiding live birds.

144 people were diagnosed with H7N9 in China last year, but just this month there have been 103 H7N9 bird flu patients, according to Chinese official reports, which may be incomplete. At least 20 have died from infection this year. New reports are issued daily with more cases.