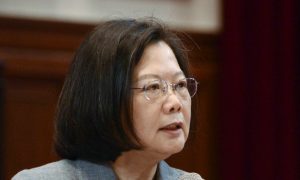 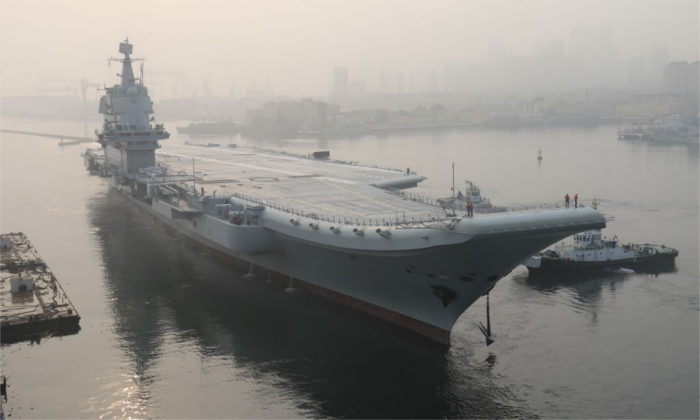 China's first domestically manufactured aircraft carrier, known only as 'Type 001A', leaves port in the northeast city of Dalian early on May 13, 2018. (-/AFP/Getty Images)
China

China is rapidly modernizing its military, and may be preparing for its first military operation in 40 years in Taiwan, according to a new report, published on Jan. 15, by the Defense Intelligence Agency (DIA).

The report detailed China’s immediate intentions to modernize to the level of other leading militaries, including the U.S. military, for the objective of invading Taiwan.

The Chinese military, known as the People’s Liberation Army (PLA), “is likely to grow even more technologically advanced, with equipment comparable to that of other modern militaries,” the report stated.

Furthermore, “Beijing’s longstanding interest to eventually compel Taiwan’s reunification with the mainland and deter any attempt by Taiwan to declare independence has served as the primary driver for China’s military modernization,” the report said.

The Chinese regime considers Taiwan part of its territory that is to be united with the mainland one day, despite the fact that Taiwan is a de facto independent country, with its own constitution, democratically elected government, currency, and military.

The DIA report referenced a Chinese white paper from 2015, titled “China Military Strategy” (pdf), where the Chinese regime explained that while world war is unlikely, it intends to prepare for the possibility of local war.

The Chinese military has specifically designed military equipment for battle with Taiwan, according to the report, anticipating that Taiwan will be supported by other nations in the event of a conflict. This includes a wide range of missiles and deployment systems, including a vehicle that launches ballistic missiles specifically against aircraft carriers.

“Beijing’s anticipation that foreign forces would intervene in a Taiwan scenario led the PLA to develop a range of systems to deter and deny foreign regional force projection,” the report stated.

Chinese advancements in some technology will soon be among the world’s most leading-edge. “China’s technological advancement in naval design has begun to approach a level commensurate with, and in some cases exceeding, that of other modern navies,” according to the report.

A new type of naval destroyer developed domestically by China, called the Type 055 Renhai class, “will be one of the most advanced and powerful ships in the world,” the report stated.

However, China’s defense spending remains low when compared to other nations. The report says that China is benefitting from a “latecomer advantage,” where it buys, modifies, or steals technology developed by other nations.

In a Jan. 2 speech, on the anniversary of a Chinese Communist Party (CCP) policy statement on cross-strait relations, Xi said “China must and will be united” with Taiwan.

The island’s president Tsai Ing-wen strongly rebutted Beijing’s claims of sovereignty, and later called for support from the international community.

“When a country like us faces difficulties and threats, we hope that the international community takes it seriously and can voice support and help us,” she said.

Days later, Xi spoke at a political meeting for the Party’s top brass, calling on China’s armed forces to “prepare for a comprehensive military struggle from a new starting point,” according to Chinese state-run media Xinhua on Jan. 4.

“Preparation for war and combat must be deepened to ensure an efficient response in times of emergency,” he was quoted as saying.

Rick Fisher, PLA expert and senior fellow with the International Assessment and Strategy Center, said Xi’s comments were an escalation in threats towards Taiwan.

“As Xi Jinping and the CCP leadership become more confident in the PLA’s gathering ability to invade Taiwan, we can expect their threats to become more strident,” Fisher said.

“In 2019 we can expect Xi Jinping to repeat his threats to Taiwan, which will be echoed by China’s propaganda organs and reinforced by PLA air and naval intimidation exercises around Taiwan.”