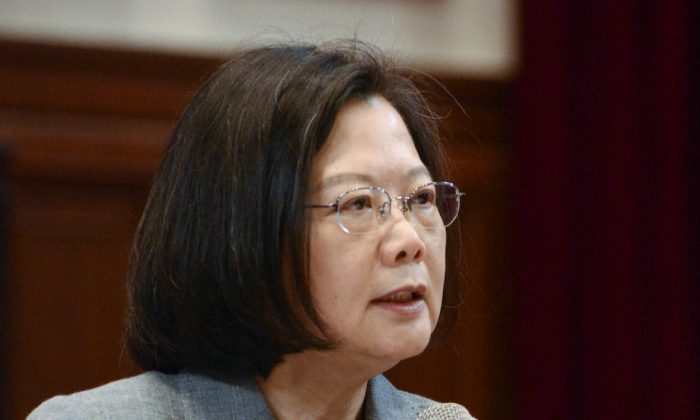 Taiwan President Tsai Ing-wen called on the international community to defend democratic values by supporting the self-ruled island amid renewed threats from the Chinese regime.

Tsai’s remarks come days after Chinese leader Xi Jinping insisted that Taiwan was part of China and that both countries should seek “unification,” in a speech re-iterating the regime’s stance on Jan. 2.

“We [Taiwan] are an important and loyal supporter of all internationally important values,” President Tsai told reporters in Taipei on Jan. 5.

“So when a country like us faces difficulties and threats, we hope that the international community takes it seriously and can voice support and help us,” she said, referring to threats from the Chinese regime to use the military to force the island into its control.

Taiwan is a constitutional democracy, and functionally an independent nation with its own military, currency, and government. The Chinese regime, however, sees the island as a renegade province that must be unified with the mainland, by force if necessary.

“When a country that does its best to practice democracy and shared international values face threats and violation, I believe that this is also a violation of democracy and those values,” Tsai added.

“If the international community does not speak out for and support Taiwan while it is facing such a situation, we have to ask which country will be next.”

Xi earlier said the regime did “not promise to renounce military and reserve the option to use all necessary measures” to bring Taiwan under its control but will work to achieve peaceful unification with the island. He said this could be made possible by adopting the “one country, two systems” model—the model used for Hong Kong after sovereignty was handed from Britain to China in 1997.

In response, President Tsai said on Jan. 2, that Taiwan had never and would not accept the position that the Chinese communist party has a legitimate right to rule over Taiwan, stressing that cross-strait talks must be handled on a government-by-government basis.

She also called out Beijing for using “suppression and threats” to coerce Taiwanese people into accepting Beijing’s sovereignty.

Since Tsai from pro-independence Democratic Progressive Party came into office in 2016, Beijing has stepped up aggressive actions against Taiwan, such as forcing airlines and other firms to remove references to Taiwan and providing generous aid and loans to countries so they will drop ties with the island.