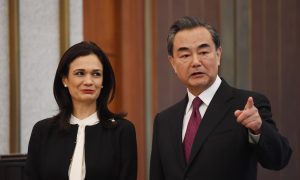 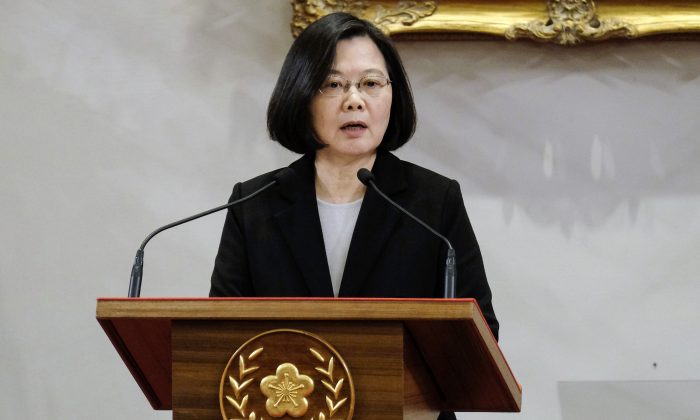 Taiwan's President Tsai Ing-wen speaks during a press conference where she responded to a speech by China's leader Xi Jinping on Taiwan relations, at the Presidential Palace in Taipei on January 2, 2019. (SAM YEH/AFP/Getty Images)
Asia & Pacific

After a year of aggression by the Chinese regime—conducting military drills in the Taiwan Strait, threatening invasion, and urging countries to sever ties with Taiwan—Chinese leader Xi Jinping reiterated in a speech on Jan. 2 the Communist Party’s longstanding claims of sovereignty over Taiwan.

The island’s president, Tsai Ing-wen, responded with a strongly worded rebuttal to Beijing’s desire for unification.

The issue of Taiwan’s sovereignty is among China‘s most sensitive issues.

While Taiwan has its own constitution, democratically elected government, currency, and military—making it, effectively, an independent nation—Beijing views the island as a region that must be united with the mainland, by force if necessary.

Xi reiterated the Chinese regime’s stance in a speech, given to senior Chinese Communist Party (CCP) officials and Taiwanese business executives, to mark the 40th anniversary of a Party policy statement on cross-strait relations.

“We do not promise to renounce military force and reserve the option to use all necessary measures” to achieve unification and prevent Taiwan’s independence, Xi said. Some Taiwanese, including some within the Democratic Progressive Party of which Tsai is a member, support Taiwan’s declaration of formal independence from China. Beijing has stepped up aggressive threats toward Taiwan since Tsai came to office in 2016.

Xi insisted on Taiwan recognizing the “one China” principle—that China, under the CCP, has legitimate rule over Taiwan—and that the “one country, two systems” model could be adopted for the island.

Upon Britain’s handover of Hong Kong to Chinese sovereignty in 1997 after more than 100 years of colonial rule, the Chinese regime promised political and economic autonomy to the city under the “one country, two systems” model. Hong Kong is considered a “special administrative region” of China.

In his speech, Xi also made the case for Taiwanese citizens to accept the benefits of “unification,” promising to protect Taiwan’s “economic interests” and offer more development opportunities.

“The differences in systems is not an obstacle to unification, nor is it an excuse for division [between the straits]. … Taiwan compatriots’ private property, religious faiths, and legal rights will be adequately safeguarded” under the CCP’s rule, he said.

Several hours later in Taipei, Tsai gave a statement in response to Xi’s speech, denying that Taiwan ever accepted the “one China principle,” as Xi claimed by citing the 1992 Consensus. That year, a meeting between Taiwan and CCP officials occurred, at which they concluded that both sides recognize only one China, but the definitions of “China” were up to each party.

Tsai noted that she is open to holding talks with China but wouldn’t accept the Chinese regime deciding the fate of Taiwanese people.

“No person or organization has the right to represent the Taiwanese people in carrying out political negotiations,” Tsai said.

She also called out Beijing for using “suppression and threats” to coerce Taiwanese people into accepting Beijing’s sovereignty.

Beijing considers it a priority to use economic incentives—such as business investments—to influence Taiwanese into accepting a “legitimate” reason for unification.

Responding directly to Xi’s claims that “the hearts and souls of compatriots on both sides of the straits are in sync,” Tsai lambasted China’s recent pressure against Taiwan, such as forcing airlines and other firms to remove references to Taiwan and providing generous aid and loans to countries so they will drop ties with the island. “These will not bring about hearts and souls being in sync,” Tsai said, using Xi’s words.

She ended her statement by urging China to take steps toward democracy—“for only by doing so can it truly understand the Taiwanese people’s thinking and persistence.” Democracy is considered a taboo subject in China, as praise for Western democratic values or suggesting that they be adopted in China is often punished.