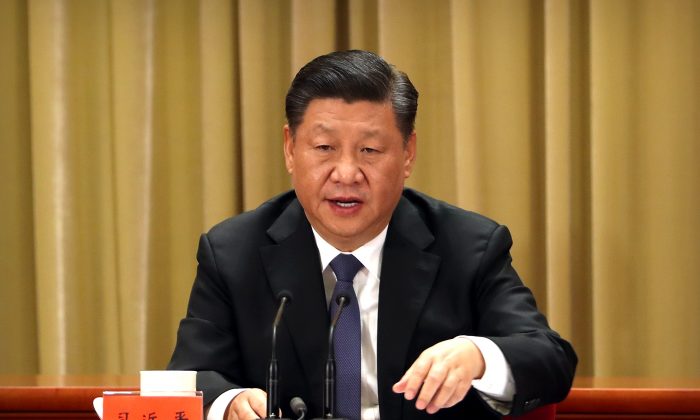 Chinese Leader Xi Jinping speaks during an event to commemorate the 40th anniversary of the "Message to Compatriots in Taiwan" at the Great Hall of the People in Beijing, China, on Jan. 2, 2019. (Reuters/Mark Schiefelbein/Pool)
Chinese Regime

Chinese Leader Tells Armed Forces to Be Ready for War

Chinese leader Xi Jinping ordered China’s armed forces to step up their preparations for war, in a speech at a meeting of top brass on Jan. 4.

The Chinese communist regime is in the midst of ramping up its armed forces, the People’s Liberation Army (PLA), as it seeks to bolster its territorial claims in the South China Sea, increase pressure on Taiwan, and confront the United States over issues from trade to the status of Taiwan.

“Preparation for war and combat must be deepened to ensure an efficient response in times of emergency,” he is quoted as saying.

Xi, who is also chairman of the CMC, said China faces increasing risks and challenges, and the armed forces must work to secure its security and development needs, according to Xinhua.

He added the armed forces need to be able to respond quickly to emergencies, upgrade their joint operations capabilities, and nurture new types of combat forces.

Xi’s remarks came days after he affirmed that China would not rule out the use of force to achieve “reunification” with Taiwan and prevent the island’s independence.

The Chinese regime sees the island as a renegade province that must be unified with the mainland, by force if necessary.

Taiwan President Tsai Ing-wen responded strongly on Jan. 2, saying Taiwan would not accept the Chinese Communist Party’s position that the regime has a legitimate right to rule over Taiwan.

On Jan. 5, Tsai called on the international community to defend democratic values by supporting the self-ruled island.

“If the international community does not speak out for and support Taiwan while it is facing such a situation, we have to ask which country will be next,” she said, referring to threats from the Chinese regime to use the military to force the island into its control.

The PLA has significantly expanded under Xi as the regime seeks to assert itself as a rising superpower.

According to a 2018 report by think tank RAND Corporation, the PLA is aiming not merely to compete with, but to defeat, the U.S. military.

In recent years, the PLA’s navy, air force, and marine corps have been ramping up their forces and upgrading technologies to achieve global power projection capabilities.

The Navy is currently building two new aircraft carriers to add to its existing Soviet-built carrier that it purchased from Ukraine. The Air Force has begun developing a stealth bomber, along with unmanned aerial vehicles (UAVs), including long-range, and cargo UAVs. The marine corps has been acquiring new armored vehicles to project power beyond the beachhead.

Cyber espionage is another way the Chinese regime, through its military and non-military arms, seeks to bridge technology gaps and advance military development.

The regime has in recent years also stepped up combat drills in waters near Taiwan, moves that have been denounced by Taipei as intimidation. It has also increasingly flexed its muscles in the South China Sea through its buildup of military and other installations on artificial islands and reef in the disputed areas.