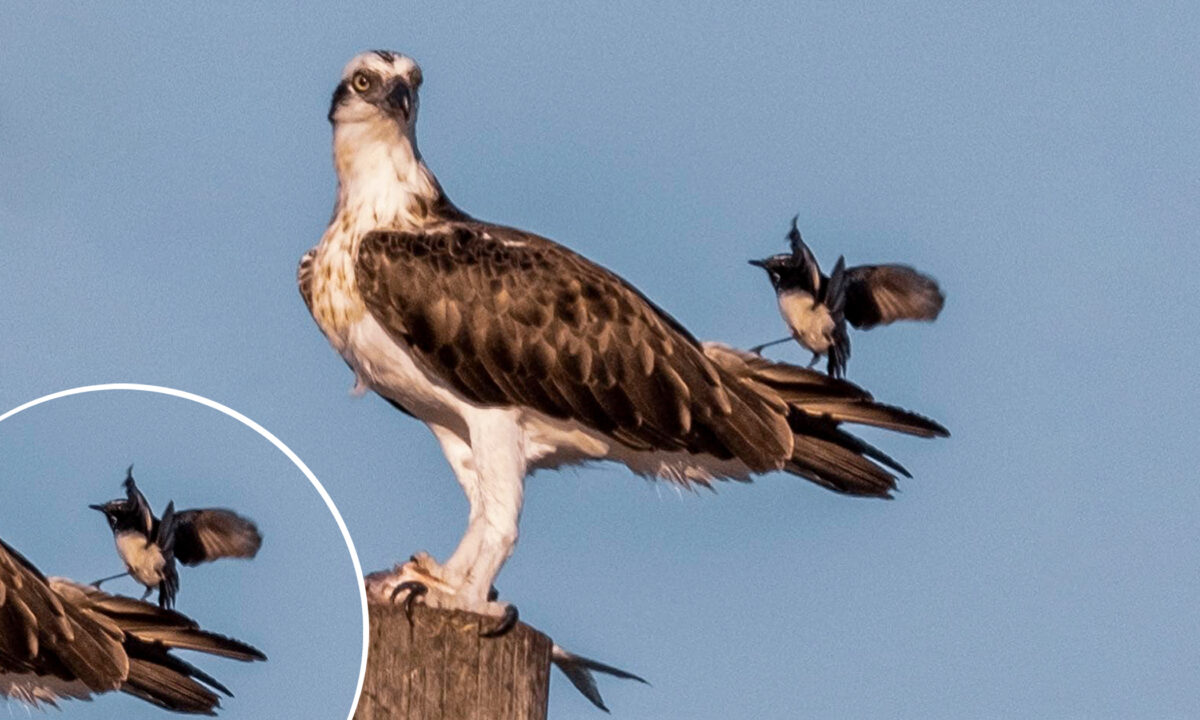 The funny moment a willy wagtail bird began teasing an osprey, who simply wanted to eat his dinner, has been immortalized on film by a passing wildlife photographer.

Michelle Diggins, 58, was on an afternoon walk with her husband in Lancelin, Western Australia, when the pair noticed an osprey on the hill above them, munching on a meal.

“We headed back to the caravan to get my camera,” Michelle told The Epoch Times. “I wandered back, and the osprey was still there. It was about 10 minutes after shooting the osprey eating when the little willy wagtail came along.”

The walkers observed the wagtail land nearby and then hop toward the much bigger bird. He flew away, then back again, flying circles around the osprey, who had by now given up on his meal. Michelle watched in anticipation, her finger on the shutter ready to “capture some antics.”

“He came back for round three, flew onto the osprey, down onto his tail. The whole time I was snapping away,” she recalled. “It looked like the wagtail just wanted to have some fun, but the osprey wasn’t joining in. He just waited for the wagtail to fly away.”

In a last-ditch attempt to get a rise out of the bigger bird, the wagtail hopped onto the osprey’s tail again before flying away. It was then that the fish-eating bird of prey finished his snack.

“It really was good to watch,” said Michelle, “something I haven’t seen before.”

Michelle, who used a Fuji XT4 camera and 100-400mm lens to snap the birds, shared her best photos with the Facebook group Australian Nature Birds, and received a huge response. “I don’t think it’s a common occurrence, but I might be wrong,” she said. “It was such a fun afternoon!”

Michelle says not much processing was needed for these photos, as she has a fast shutter to capture movement without blur in bird photography. She shares her work on her personal Facebook and Instagram pages.

A semi-professional photographer, Michelle lives in her birthplace of Victoria, Australia, and specializes in landscape, wildlife, and astrophotography.

“I took up photography about six years ago after my children were all grown up; I finally had the time to get out and indulge my creativity,” she said. “I really had no idea how to use a digital camera, so after attending several workshops and watching some amazing photographers on YouTube, I stared to improve my skills.”

Michelle is happiest with her camera in hand in the “harsh Aussie outback,” under clear night skies, and amid the curiosities of wildlife.