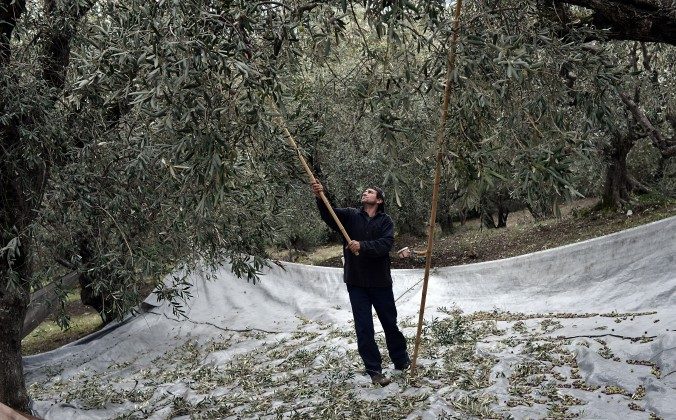 Collecting olives for olive oil near the village of Milies, central Greece, in this file photo from Jan. 5, 2013. (Louisa Gouliamaki/AFP/Getty Images)
Food & Dining

Chasing the Early Harvest for Olive Oil (With Recipes)

Early olives are lean and green, less juicy than when they become mature black olives. But, they’re peppery, fresh, and yield a much higher price.

And select estates are pushing harvests earlier—thanks to technology and heightened awareness of the health benefits.

“When it’s fresher, it’s healthier, because you have a higher content in antioxidants,” Falcó said.

The presence of polyphenol compounds that are considered so healthful—antioxidant as well as anti-inflammatory properties—largely depends on the stage of pressing. Wait too long to harvest, and those beneficial compounds may not even be present anymore.

“An olive oil that is not very intense in the beginning and not peppery [from a later harvest], it has less content in polyphenols, so it’s going to become milder and milder through the year. You still have the oleic acid, which is very good for you, but not so much the polyphenols, the antioxidants,” Falcó said.

After analysis, she found the olives on her estate maintain their optimum polyphenol levels for 8 to 10 days. After harvest, the olives are immediately taken to the mill, so that oxidation, the great enemy, is minimized as much as possible.

The quality is high, and the production intensive, but the yield is low, only about 10–12 percent. The highest quality olives are used for extraction, and they are not pressed to the last drop, Falcó said.

To put it in perspective, an entire tree yields about two bottles of olive oil. While for wine, 1 kg (2.2 pounds) of grapes produces 1 liter of wine, 10 kg of olives are needed for 1 liter of olive oil.

About 20 or 30 years ago, the south of France used to be known predominantly for its production of a lighter, milder olive oil from ripe, black olives.

“It is easier to crush ripe or fermented olives with a stone and obtain a paste like a tapenade than it is to do the same with green olives,” said olive oil producer Rémy Reboul, who produces Château d’Estoublon olive oil in the south of France. “The olives from the olive groves were stored in the attics, already ripe or very ripe. They fermented very quickly.”

Leaves and small branches were not removed, and the olives not washed. “In terms of aromatic perception, they were far away from what we have defined today. The olive should not be woody, muddy, rancid,” Reboul said. The paste would then be pressed for about 20 minutes through filters that were not particularly hygienic, he said.

But both the technology, Reboul believes, and predilections, have changed, “The taste has became more elegant, pure, civilized, without any defects.” Black olives account for less than 10 percent of the region’s olive oil production nowadays, he said.

He watches closely for the optimum stage, the “turning,” at the end of October, when the olives change color from green to black. “We calculate the date of harvesting with very precise analysis. … Having these punchy peppery, spicy, and green tastes reveal the strength of the terroir and the olive trees themselves,” he said.

Today, the rules of production are very different: leaves and branches are stripped; olives washed and crushed in about 10 minutes; the paste transferred and processed in 25 minutes; and finally 15 minutes for the pressing and centrifugation to produce the olive oil.

The final product: cleaner, more controlled, and more sophisticated. “Some people will miss the old taste …” he wrote in an email.

At Marqués de Grinon, “The mill is not actually a mill,” said Falcó of the machinery her estate uses to extract olive oil. Rather than traditional crushing of the olives, the machine slices rather than crushes, to prevent oxidation.

Olive oil aficionados chase early-harvest oils around the globe—not only in the fall for the Northern Hemisphere oil, but also in the spring for olive oil produced in the Southern Hemisphere.

Enthusiasts readily place calls to olive oil specialty stores, waiting to pounce on the freshest olive oils as they arrive.

“Each year, more and more people ask for new harvest [olive oil]. They ask quicker so now we have to move through the new harvest quicker. We’ll probably shift our schedule of introducing the new harvest a little earlier each year,” said Steven Kaufman, executive vice president of De Medici Imports. Kaufman spoke at a panel discussion about early harvest olive oil last month in Manhattan.

“It would seem from here that there is a bit of an enlightening going on among importers and retailers that early-harvest olive oil is worth more money,” he wrote in an email. But he hasn’t yet noticed his competitors increasingly stocking it.

“The smarter the importer/retailer, the more likely there will be offered in their stores more early-harvest olive oil,” Jenkins added.

“Once the farmer/miller realizes how much more valuable his early-harvest oil is, the sooner he will routinely plan and execute his own early harvest. These guys are stuck in a rut—they instinctively know that the longer they wait to harvest, the larger their yield. Larger yield to them means more revenue. The notion of higher prices for early-harvest olive oil has not yet ‘taken’ with them.”

Typically, early-harvest olive oil is enjoyed simply, on a grilled sliced of bread with garlic and olive oil (called fettunta in Italy). Other dishes that use olive oil as a luxurious finishing touch depend on the locale, from ribollita (a vegetable soup with beans), or pasta and fagioli (pasta and beans).

Food historian Francine Segan said some Italian celebrations of new olive oil coincide without the first of the wine as well, making for joint festivals. She offers the recipes below that allow olive oil to shine. One of the recipes is a pasta dish that gets a white wine glaze and is served with fresh olive oil, celebrating both products of the harvest.

Traditionally, this dish was prepared at the height of the oil-pressing season, offered by the olive growers as a gesture of celebration to those who helped with the harvest. The name of the dish is from the Liguria dialect for olive press, deficeira, and, fittingly, it’s served with olive oil; a nice choice is the delicate, fruity variety made from the tiny taggiasca olives of Liguria. Olive oil takes center stage here, and it’s added off the heat, so be sure to pick a good quality oil.

Cooking pasta in wine instead of water creates an amazingly aromatic sauce. The flavor of the wine really stands out, so be sure to pick one with pronounced fruity flavor and crisp acidity like Soave or pinot grigio.

In a large saucepan, bring the wine and bay leaf to a boil. Add the pasta, lower the heat to a low boil, and cook, loosely covered, until the wine is absorbed and the pasta al dente, about 20 minutes. Off the heat, stir in 3 to 4 tablespoons of oil and season with salt and freshly ground black pepper. Serve topped with grated or shaved cheese.

In several regions, Italians add a splash of wine, instead of sauce, to cooked pasta. Local farmers even enjoy a sort of liquid pasta drink in the winter as a pick-me-up made from the hot pasta cooking water mixed with red wine and generous amounts of black or red crushed pepper. In Piedmont and Emilia Romagna, it’s common, especially for the older generations, to top anolini or small ravioli with red wine. In Molise they make a simple pasta soup called scattone, where the broth is just the pasta’s cooking water seasoned with red wine and pepper. A fabulous medieval festival called Sagra dello Scattone is dedicated to this centuries-old dish, held each year in August in the Molise towns of Torella del Sannio and Bagnoli del Trigno.

Just three ingredients! Only the Italians could create a gourmet feast using only chestnuts, olive oil and pasta.

The trick: the spaghetti is cooked in water right along with the chestnuts, risotto style. It’s a classic “poor” recipe from Palermo that’s so creamy, sweet, and luscious it’s not even topped with cheese, just a drizzle of olive oil and freshly ground black pepper to finish.

Be sure to use high quality olive oil as its flavor will really stand out in this delicious dish.

Cook the chestnuts in their shells in boiling water for about 30 minutes. Then, while still hot, cut them in half and scoop out the meat; discarding the shells.

Put the chestnut meat, along with 4 cups of fresh water and a pinch of salt, in a medium saucepan over medium heat and bring to a low boil. Cook until the chestnuts pieces are extremely soft, about 20 minutes, mashing every once in a while with a fork so the pieces are tiny.

Cut the spaghetti in half, add to the saucepan with the chestnuts and water, raise the heat to medium high, and low boil until al dente. If the water is fully absorbed before the pasta is al dente, add a bit more boiling water. The idea is to balance the amount of liquid with the cooking time so you have a nice creamy “sauce” and just like with risotto, you don’t need to drain the pasta. Serve topped with a drizzle of olive oil and freshly ground black pepper.