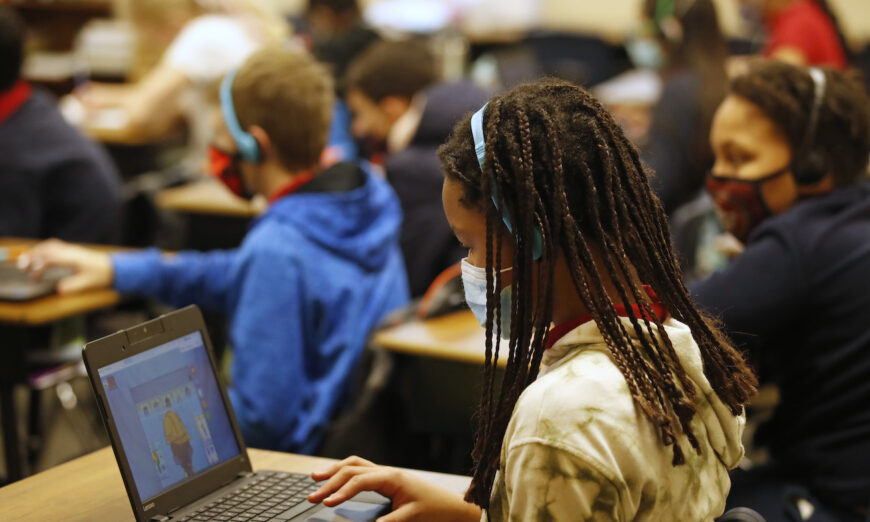 A Pittsburgh physician says the Centers for Disease Control and Prevention’s (CDC) report of rising hospitalizations among adolescents aged 12 to 17 is misleading, saying it makes “no sense to raise alarms” as the same data used in the report showed a significant decline in the month following the slight increase.

“Listen. There was definitely an increase in April, but why would CDC make this statement today, or publish a graph showing a scary increase, given that it’s now June. Have you seen what’s happened from May 1 to today?” Dr. Walid Gellad, an associate professor of medicine and health policy at the University of Pittsburgh wrote on Twitter on June 4, following the publishing of the CDC report.

“It makes no sense to raise alarms about something that has changed completely,” he added.

Meanwhile, Joseph Allen, associate professor at Harvard’s T.H Chan School of Public Health, said it was misleading of the CDC to not include the last three weeks of data in their conclusion prior to publishing.

“Hospitalizations are *NOT* increasing in adolescents, as is being widely reported. Not sure why CDC cut the data at April 24 in this new June 4 report. Current data are [available] through the end of May (?), and it tells a different story,” Allen said on Twitter, adding that, “I know their goal is to drive vaccinations, and I support kids getting vaccinated, but this is misleading.”

However, Allen says the latest data from May showed that hospitalization rates declined to 0.6 on May 29.

The CDC did not respond to The Epoch Times’ inquiry of why it didn’t include the data from May in its report.

The report involved 204 adolescents hospitalized between Jan. 1 and March 31, who were “likely admitted primarily for COVID-19-related illness” across 14 states.

Among those, 64 (31.4 percent) were admitted to an intensive care unit and 10 (4.9 percent) were put on a ventilator, “but there were no associated deaths.”

Most of the 204 patients, or 70.6 percent, had one or more underlying health conditions, including nearly 36 percent with obesity, 31 percent with chronic lung disorders, and just over 14 percent with neurologic disorders.

The CDC also reported that it had found COVID-19 hospitalization rates were 2.5-3 times higher than the rates of three seasonal flu-associated hospitalizations during comparable periods. However, the health agency noted that the widespread testing for COVID-19 “likely disproportionately affects influenza rates compared to COVID-19 rates.”

COVID-19-associated hospitalization rates in children were found to be overcounted when 45 percent of the 117 patients admitted to Lucile Packard Children’s Hospital in California were not due to the CCP (Chinese Communist Party) virus.

“It’s really important that we distinguish between children who are hospitalized with asymptomatic SARS-CoV-2 infections and those hospitalized for COVID-19 disease,” Dr. Alan Schroeder, co-author and clinical professor of pediatric critical care, told Stanford Medicine News Center, adding that by relying on “hospitals’ positive SARS-CoV-2 test results, we are inflating by about two-fold the actual risk of hospitalization from the disease in kids.”

Teens Encouraged to Get Vaccinated

Following the publication of the report, CDC Director Rochelle Walensky cited the study as a reason for adolescents to get inoculated and continue masking and social distancing if not fully vaccinated.

Adding that “Until they are fully vaccinated, adolescents should continue to wear masks and take precautions when around others who are not vaccinated to protect themselves, and their family, friends, and community.”

The CDC made a recommendation for teens 12 to 15 years old to receive the Pfizer COVID-19 vaccine on May 12 following the Food and Drug Administration’s decision to extend the emergency use authorization of the vaccine in adolescents.

Peter Doshi, associate professor of Pharmaceutical Health Services Research at the University of Maryland and an editor at the British Medical Journal, said that serious adverse reactions from the vaccines cannot be discovered within the six weeks observation timeframe after getting an injection.

“There’s a view out there that serious side effects always occur within six weeks of dosing,” Doshi said at the FDA’s Vaccines and Related Biological Products Advisory Committee meeting on June 10. “Well, it’s just not so simple.”

“The fact is that historically, side effects were not always discovered so quickly. For pandemics and influenza vaccines, cases of narcolepsy in adolescents were first reported around nine months after vaccines were given. And now with COVID vaccines, it wasn’t until this month, four or five months into the vaccination campaign in Israel that myocarditis was recognized as harm in young men.”

Around 275 cases of myocarditis, an inflammation of the heart muscle, were reported in Israel following a second shot of the Pfizer COVID-19 vaccine among more than five million people who have been vaccinated.

Israel’s Health Ministry said that an investigation of the myocarditis cases found that there was a “possible link between the second vaccine dose and the onset of myocarditis among young men aged 16 to 30,” particularly those in the 16 to 19 age group.

Reports of myocarditis occurring in individuals ages 16 to 24 following the second dose of a messenger RNA vaccine have recently raised concerns, with the CDC’s vaccine advisory committee set to hold an emergency meeting next week to discuss those reports.

Myocarditis, a rare condition, is occurring at a higher than expected rate in vaccinated individuals, the CDC says.

The CDC has so far identified 226 reports in people ages 30 and younger that might meet the agency’s “working case definition” of heart inflammation following the shots.

A quick search on the Vaccine Adverse Event Reporting System (VAERS) for only myocarditis and pericarditis, an inflammation of the saclike tissue surrounding the heart, resulted in 858 total events in individuals of all ages as of June 11.

While reports of heart inflammation are made on VAERS, it does not necessarily mean the vaccine caused the event because “the reports may contain information that is incomplete, inaccurate, coincidental, or unverifiable,” the VAERS website states.

VAERS is known to capture less than one percent of all adverse reactions from vaccines due to underreporting.