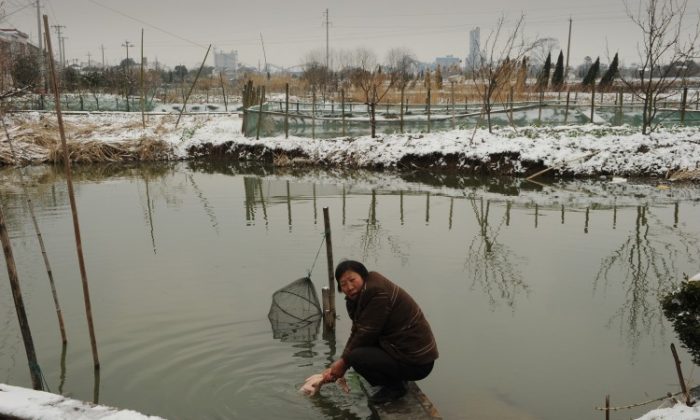 A woman washes a duck which she is preparing for Lunar New Year dinner in Zisiqiao village in China's eastern Zhejiang Province on Feb. 8, 2013. (Peter Parks/AFP/Getty Images)
China

The Chinese regime for the first time admitted the existence of so-called “cancer villages”—areas near factories and polluted waterways where cancer rates have increased to startlingly high levels.

The Sina Weibo of the state-run Global Times on Wednesday published news and a map of the villages that are especially cancer-stricken. Posting in Chinese, the Times, a mouthpiece of the ruling Chinese Communist Party, cited the Chinese Ministry of Environmental Protection. The blog Tea Leaf Nation brought attention to the post.

“Among its content is a clear demonstration that because of chemical poisoning, ‘cancer villages’ and other serious [threats to] social health have begun to emerge in many areas. Moreover, according to media person Deng Fei, these … ‘cancer villages’ are spreading from the middle of Eastern China to the middle of Western China,” a translation of the Global Times message reads.

The message was published in environment ministry’s “Twelfth Five-Year Plan for Prevention and Control of Environmental Risks from Chemicals,” the post reads. And the Global Times’ microblogging account also included a weeping emoticon.

Over the years, Chinese environmental activists have said there is a strong link between increased cancer rates and industrial pollution—in part due to corrupt officials looking the other way when developers and businesses violate environmental regulations. Investigative journalist Deng Fei in 2009 showed some of the worst-hit areas using Google maps.

The ministry also acknowledged that China has been slammed with “poisonous and harmful chemical products” that are banned in developed countries, reported the AFP news agency.

Environmental lawyer Wang Canfa said the Global Times’ blog posting was significant, as it was the first time that the Chinese regime officially noted the “cancer village” phenomenon.

“It shows that the environment ministry has acknowledged that pollution has led to people getting cancer,” he was quoted as saying. “It shows that this issue, of environmental pollution leading to health damages, has drawn attention.” The AFP reported that the term “cancer village” appeared as early as 1998 in Chinese media reports.

The Weibo posting comes just after several high-profile cases involving air and water pollution. In January, a thick haze of smog descended upon dozens of Chinese cities, including Beijing, lingering for days.

Around a week ago, Deng Fei asked his Weibo followers to take pictures of a river or a stream in their hometown and post it online. The move, he said, was designed to show the extent of pollution in Chinese rivers.