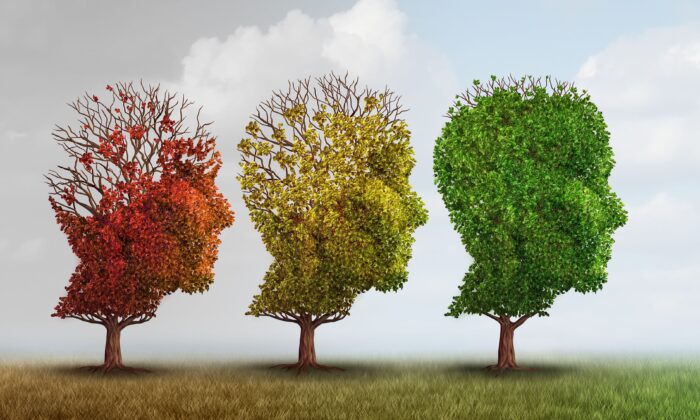 Dementia is a complex disease with complex causes that requires a multifaceted and highly personalized treatment.(Lightspring/Shutterstock)
Mind & Body

Can Dementia Be Reversed?

For decades, conventional medicine has offered little regarding the treatment of patients suffering from dementia or cognitive decline. Alzheimer’s disease is now the third-leading cause of death in North America, after heart disease and cancer. But treatment is possible.

It is estimated that dementia will afflict approximately 50 percent of the next generation of senior citizens (that would be every other person between the ages of 40 and 60 reading this article right now). Most seniors today feel utterly helpless as they witness the deterioration of their cognitive abilities. Some even accept this as a normal part of aging. But dementia is not a normal part of aging and should not be accepted as such.

And while we’ve all met cancer survivors, no one has ever met an Alzheimer’s survivor—until now.

The ReCODE program (or Reversal of COgnitive DEcline) was developed over the past decade by Dr. Dale Bredesen, the director of research for neurodegenerative disease at UCLA and the author of “The End of Alzheimer’s: The First Program to Prevent and Reverse Cognitive Decline.”

This treatment program is based on addressing the several dozen mechanisms responsible for the expression of Alzheimer’s disease and is completely in alignment with the principles of integrative and functional medicine.

So what exactly is the ReCODE program? To quote Bredesen: “Imagine you have 36 holes in your roof—because we initially identified 36 different mechanisms involved—if you patch one hole, that’s not going to help you much. You want to patch all the holes. Now, a drug typically patches one hole … [but you need to] patch the other 35 as well.”

The ReCODE program is a full-spectrum, functional medicine approach for addressing all the physiological dysfunctions and imbalances that ultimately present as Alzheimer’s in the patient.

Your brain’s ability to perform its various activities requires connections between brain cells (also known as neurons). You have approximately 100 billion neurons in your brain, and each neuron has approximately 10,000 connections, called synapses. That’s more than 100 quadrillion synapses per brain.

Many patients ask what the differences are between Alzheimer’s disease, dementia, and cognitive decline. Cognitive decline is a general term denoting any loss of cognitive function of which dementia is a part.

Dementia is a syndrome used to describe symptoms that impact memory, communication, and performance of daily activities of which Alzheimer’s disease is a part. Alzheimer’s disease is the most common type of dementia, associated with beta-amyloid plaque deposits in the brain and characterized by progressive worsening of memory, language, and thought. Since the term Alzheimer’s is used by the general public to denote any form of dementia, that’s the term I use.

One of the first steps of the ReCODE program in restoring this balance is determining what subtype of Alzheimer’s the patient has:

These are patients with mainly inflammatory symptoms. They have a brain that is figuratively “on fire” and balance cannot be restored until the inflammation has been brought under control. There have been many similarities observed between adults with this type of Alzheimer’s and children on the autism spectrum—with some overlap of successful treatment modalities for both.

This is a mixed subtype in between inflammatory and atrophic. This is typically associated with diabetes and insulin resistance and is the most common form of Alzheimer’s that we see and treat.

These are patients in which disease is driven by a lack of essential nutrients, hormones, or other growth factors. Withdrawal of any of these factors (such as testosterone, estrogen, vitamin D, or essential fatty acids to name a few) will unfavorably alter the synaptic balance.

These are patients with toxic exposures ranging from heavy metals to persistent organic pollutants to biotoxin illnesses such as mold toxicity or Chronic Inflammatory Response Syndrome. Treatment success for these patients is paramount in identifying and removing the toxic exposure.

These are patients in whom their Alzheimer’s is driven by poor circulation of the brain. These patients will frequently have other vascular issues as well, such as coronary artery disease or peripheral vascular disease.

These are patients in which disease is driven by traumatic injury to the brain. It can be one large traumatic injury, but more commonly is a result of multiple, recurrent, minor head traumas, such as those seen in professional football players.

These subtypes are not mutually exclusive of one another, and having one subtype doesn’t exclude a person from having another subtype. Most patients will have one predominant subtype driving their disease and then have varying degrees of the other subtypes as contributing factors to their dementia. A successful ReCODE program will address all the patient’s problems in due course.

A frequently asked question is, “What will I be given or what will I need to do for the ReCODE program to work for me?”

The answer to that question is different for every individual. For one patient, the foundational treatment piece may be following a low-glycemic diet far beyond the expectations of the patient’s primary care physician or endocrinologist. For another, it may be correcting their nocturnal oxygenation as a result of their untreated sleep apnea for the past decade. For another, it could be detoxifying them of the lead they had accumulated from a youth spent breathing in leaded gas fumes. Another may require balancing their hormones, and another, controlling their inflammation from their autoimmune disease, and so on and so on. That question cannot be answered until the individual patient has had a complete functional medicine evaluation.

The core treatment strategies of the program are based on diet, lifestyle, supplements, herbs, and medications—usually in that order. This program has no magic bullets, and if that is what you are looking for, then you should look elsewhere. This is a full-spectrum, multi-faceted approach to your neurological health in specific and your overall health in general.

Armen Nikogosian, MD, practices functional and integrative medicine at Southwest Functional Medicine in Henderson, Nev. He is board-certified in internal medicine and a member of the Institute for Functional Medicine and the Medical Academy of Pediatric Special Needs.  His practice focuses on the treatment of complex medical conditions with a special emphasis on autism spectrum disorder in children as well as chronic gut issues and autoimmune conditions in adults.