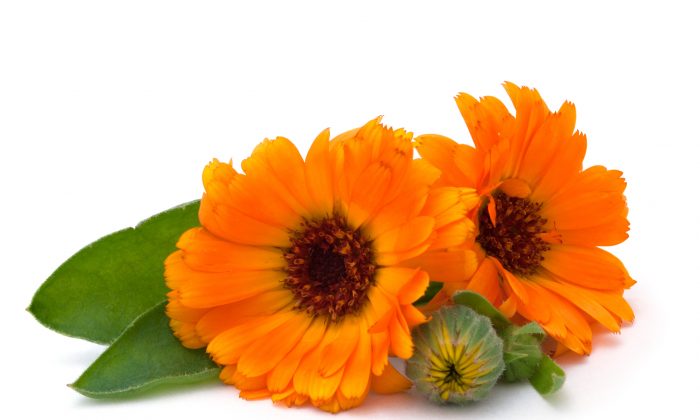 This photo shows the the common marigold (Calendula officinalis), a traditional herb to heal many ailments. (Kardash/photos.com)
Alternative Health

Calendula for Life’s Cuts and Bruises

The deep-golden petals of the common marigold (Calendula officinalis) have been used for millennia as an antiseptic in creams, ointments, poultices, washes, and tinctures. Everyone from soccer moms to mountaineers should have some on hand for occasions when an accident leads to cut or grazed skin, a burn or scald, or crushed body tissue of any kind.

Calendula ointments or creams can bring about such quick healing that it will amaze you. Even in severe trauma, calendula can eliminate any signs of inflammation, throbbing, and infection as early as the following day, without the development of scar tissue.

It is not only the main antiseptic ointment used by herbalists throughout the world, but also the petals contain resins that are anti-fungal as well. It acts to stimulate the lymphatic circulation, reducing swelling in lymphatic nodes and also mobilizes white blood cells, helping to fight infection.

Herbalists use calendula tincture or ointment instead of proprietary antiseptics and iodine tincture, which can be very harsh on the sensitive areas of the body. Since calendula can be applied to sensitive body areas, it is much more useful and effective for conditions such as diaper rash, bed sores, and ulcers of the elderly, or any itchy skin rash.

While there are many creams and ointments on the market that contain calendula, I find that the best results are obtained from calendula cream or ointment that I have made myself. I use calendula that I have either grown myself or sourced locally so that I can be guaranteed of the amount and its freshness.

If you have not made your own creams or ointments before, calendula is an easy one to start with. Harvest the flower petals after the morning dew has dried and just after the flowers have opened in summer. Dry them at a low temperature and then mix well into the base of your choice—glycerin for creams and beeswax for ointments.

Marigolds are easy to grow, and once they are established in your garden, they will self-seed readily. The flower heads open and close with the rising and setting of the sun, and open flower heads in the morning forecast a fine and sunny day.

Plant marigolds in springtime in a sunny spot in well-drained soil without too much temperature variation. They are well-suited to growing in pots and window boxes. Plant in a standard potting mix combined in equal parts with composted fine bark. Deadhead or harvest the flowers regularly for your creams, as this will encourage continuous flowering.

Be careful not to confuse the medicinal calendula with the African marigold (Tagetes species). If you are unsure, check with your local nursery before attempting to make your own medicines.

Calendula has an extremely long history, being first used in Indian and Arabic cultures. The Egyptians made use of its beneficial properties as did the Greeks, who flavored their food with the petals.

This long record of traditional use has commonly included the addition of the petals in soups for their taste, color (used instead of saffron), and of course medicinal properties.

In 17th century Britain, the peasantry considered the petals so important to the making of broth that none were considered well-made without the addition of dried marigold. Among its many other virtues, it was also said to strengthen and comfort the heart.

Traditionally, its principal internal use was for viral infections of the liver and the treatment of varicose veins. But this would have been prescribed with caution, as calendula can stimulate liver function too quickly and lead to nausea.

Certainly the herb requires care when prescribed internally, and herbalists only rarely do so.

If you want to experiment with calendula, there are many recipes that include it, and many advise using it the same way the Greeks did—adding it as a garnish to either savory or sweet dishes.

The place it is most useful, however, is as an ointment in the medicine cabinet—the first remedy you should go to for first aid.