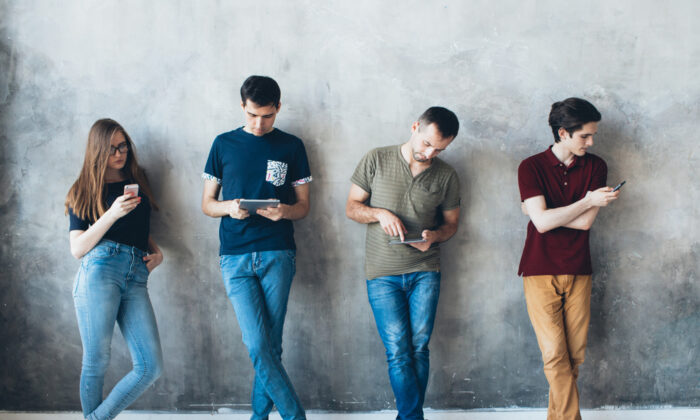 The digital minimalists Newport interviewed had felt they were losing their autonomy and time to their devices. They redirected their energy to pursuits that mattered to them. (Shutterstock)
Media & Society

Cal Newport: On Attention in an Age of Digital Distraction

Only a few years ago, Cal Newport’s ideas about digital distraction and social media made him an outlier. He was a millennial who read a print newspaper and never had a social media account, during a time when every small business was starting, if not an account, a whole department.

And even though no one could give Newport a compelling argument for using social media, they asked without a hint of irony, but what if by not having an account, he missed out on a potential opportunity?

“People used to think my thoughts on social media were eccentric if not downright dangerous,” he said. “When I wrote an op-ed in The New York Times in 2016 that said social media was not as important for their careers as many young people think, the outrage was so strong that the paper commissioned a response op-ed for the next week to argue against my points.”

Less than a year later, the tide was turning.

“Starting around early 2017, I noticed this reaction begin to change. People were increasingly receptive to this idea that there might be something rotten about our relationship with our digital devices,” Newport said.

Newport is the author of several books, including “Deep Work” and most recently “Digital Minimalism,” which both deal directly with our relationship with digital distraction.

He’s a computer scientist at Georgetown University and grapples with mathematical theorems for a living—exactly the kind of field that requires deep work, or pushing your cognitive capabilities to their limit. He has published more than 60 peer-reviewed papers that have been cited more than 3,500 times. So he was, in fact, incredibly aware of the sort of cognitive noise that can immediately have a negative, and accumulated, impact on your ability to focus and concentrate.

In it, he laid out a vision for his personal and professional life, and ended it with the earnest request to “accept only excellence from myself.” By the end of the year, he had an entry titled “The Plan,” in which he listed his values in the categories of relationships, virtues, and qualities.

“In my professional life, I’ve always been surrounded by people who do high-impact work at elite levels, so I’ve always been driven to understand how I can get better and better at what I do,” Newport said. “This mindset of continual improvements was simply in the air around me at that stage of life, and seemed as natural as breathing.”

It was, in many ways, a natural progression. In 2006, Newport had published his first book, “How to Win at College,” for students, which includes the tip “always be working on a ‘grand project.'”

Newport was a student himself at the time and had found college advice books written to be too fluffy, or talking down to students. Before the books, he had actually been the humor columnist for the student newspaper at Dartmouth.

“Once I started down the path of writing, I found I had a knack for it, and so I kept going long after I moved beyond my student years,” Newport said.

He published “How to Become a Straight-A Student,” and then started blogging about study hacks, and published “How to Be a High School Superstar.” In 2010, he got interested in the idea of “Simplicity 2.0,” or the power of specialized craftsmanship in our age of general-purpose computing, and the danger of passion-driven career planning. These ideas are explored in length in his last three books.

With “So Good They Can’t Ignore You: Why Skills Trump Passion in the Quest for Work You Love,” Newport debunked the passion hypothesis (“do what you love,” or “follow your dreams”) showing that it’s not only wrong, but dangerous. He compares it to the “craftsman mindset,” which instead “focuses on what you can offer the world” while “the passion mindset focuses instead on what the world can offer you.” The latter has a track record for leading to disappointment and unhappiness, as he shows through interviews and stories. This book focused on the importance of skill, the beginnings of his attention capital theory.

If his ethos seems clear and unwavering, as he writes in his books, it’s because he has carved out the solitude necessary to form his ideas and values. He describes a stack of 12 black Moleskine notebooks, accounting for roughly one per year, with one more in his work bag.

It turns out, knowing yourself is the beginning of an antidote to digital distraction.

“Deep Work” begins with psychiatrist Carl Jung writing away in a locked private office in a village by the lake.

It goes on to share stories of other acclaimed individuals who eschew email and instant messaging in order to have long stretches of uninterrupted time, during which they churn out sometimes groundbreaking work in a relatively short period of time. Newport aimed to show the reader how to do that.

The book was published in 2016, and he has since many times had to explain that he isn’t, in fact, a neo-Luddite (in fact, he’s excited about new developments in artificial intelligence and virtual reality).

“Deep work is necessary to wring every last drop of value out of your current intellectual capacity,” he wrote in the first chapter. Many professions require nothing short of this, for one to stand out. But Newport found that with the rise of email and other methods for constant communication, even workers in these fields were working longer hours, dedicating more time to messaging and relegating the actual work to early or late hours outside the office. Knowing this, it’s hard to make a case for email’s ability to aid productivity.

There’s a bigger cost than merely wasting time. Newport shows that if you spend enough time fragmenting your attention, you can permanently reduce your capacity to even do deep work.

After publishing “Deep Work,” Newport planned to write about what the workplace might look like going forward if we actually got rid of email and Slack. He wanted to explore this idea of attention capital theory, that in modern knowledge work, the primary capital resource is the human brain.

But feedback from readers of “Deep Work” took him in another direction.

People kept asking, what about our personal lives? How can I apply these principles outside of the workplace?

Later that year, Newport was on a beach in the Bahamas when he finally found the words: “digital minimalism.”

That was essentially the philosophy he was advocating for, to take the principles of minimalism and apply them to how you use technology. Rather than trying to make a case for whether Facebook or Twitter is good or bad, he outlines a broader philosophy, asking whether an app or platform adds positive value to your life (and making very specific arguments for elements that don’t).

Instead of social media, Newport has an “interesting” inbox, a public-facing email where his readers and followers can send him links to articles, books, studies, and other things that may be of interest to him.

“I love my interesting inbox,” he said. “I learn a lot from what comes through that channel.”

“In this way, it provides the same value to me that social media does for many others, but does so without any engineered addiction.”

In preparing to write the book, Newport had reached out to his readers to ask if anyone would be interested in trying out a “digital declutter.” He expected maybe 40 or 50 brave souls to venture forward; 1,600 signed up.

The results were interesting: people old enough to remember life without the internet talked about reconnecting with old hobbies and interests that were perhaps lost to them with their time sunk into scrolling on their phones. But people who had practically grown up with smartphones felt like they had stepped out into the void. There was real existential fear because they didn’t have anything to fill the void, or know how to go about beginning.

It solidified Newport’s theory that the tips and tricks and weekend digital detoxes weren’t enough. Especially if those tips relied on depriving oneself of something we had before. People needed an underlying philosophy and values to have a staying reason to use tech in a way that would only improve their lives. “Digital Minimalism” contains not just philosophy, but a practical 30-day guide. He even presents a philosophy for socializing in the digital age.

Newport also interviewed digital minimalists who actually live a variety of lifestyles. Some use social media in a clever and intentional way, some find they don’t miss it after all. What it really came down to was reclaiming autonomy.

“Most of the digital minimalists I encountered were people who became fed up with how much of their time they felt they were losing to their devices. They felt like they were losing autonomy, so went looking for ways to redirect their energy back to what really mattered to them,” he said.

In a podcast interview, he used heavier terms to describe what he was hearing: “People were getting the sense that their humanity itself was being degraded.”

This was a huge shift in public opinion from when he was writing “Deep Work.”

In one book, Newport interviews a talented 16-year-old professional banjo player who lives a monastic lifestyle and derives fulfillment from spending hours on improving technique. In another, he tells the story of a craftsman of handmade furniture who wrote a book subtitled “Creative Focus in the Age of Distraction.”

“Our brains are wired to crave manipulating our physical world with our hands; to see intentions made manifest concretely,” he said. “Physical crafts satisfy this craving in a way that no amount of digital memes can approach.”

“In my own life, recently, I’ve been getting into soldering together circuits—usually for little toys or gadgets for my kids. I’m also struggling to get a cool drip irrigation system up and running in our gardens.”

Newport writes about the difference between low-quality leisure and high-quality leisure, the kind Aristotle identified as crucial for human happiness. These are pursuits he recommends people develop before they try to quit social media or declutter their digital life, not after, in order to prevent that miserable feeling of the void.

Part of this advice includes creating a “leisure plan,” a strategy for committing to high-quality pursuits. It can be seasonal or weekly, and ideally consists of both objectives and habits you intend to honor for that period (“Attend one cultural event per week”).

Newport has three young children, so the family’s leisure plan tends to center around activities appropriate for them. “Interesting museums, nature centers, hikes, visits to relatives, games, and family movie nights,” he said.

Despite his work on the dangers of the attention economy, with companies like Facebook and Twitter making money off your eyeballs and having every incentive to press forward, Newport is an optimist.

“Right now, in the world of knowledge work, we are making very poor use of the brains we employ. This is going to shift,” Newport said. This is the subject for his next book, “World Without Email,” set for publication next year. “We will look back at our current workflows—which depend on frenetic communication—with puzzlement.”

Newport also thinks AI will ultimately help solve some of these problems, and “minimize unproductive busyness in the workplace—which is making whole sectors of our economy miserable.”