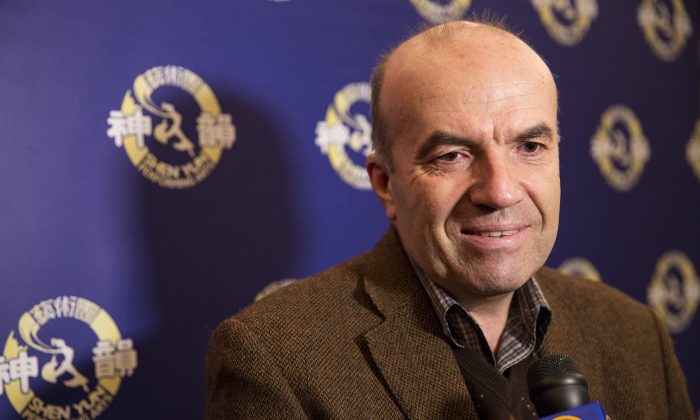 Dr. Milkov attended Shen Yun’s performance at the National Arts Centre on Saturday night, Jan. 3, as a heavy snowstorm descended on the nation’s capital. But the weather outside was soon forgotten, given Shen Yun’s presentation of authentic Chinese culture with its graceful dancers in colourful costumes and, of course, its unique orchestra.

Shen Yun takes the audience on a journey through 5,000 years of Chinese culture in order to revive the traditions, which have been suppressed and destroyed due to 60 years of communist rule.

Dr. Milkov recognized that political movements are ephemeral when compared with the traditions of an ethnicity and that what Shen Yun presents is the real China.

“It seems to me that the tradition is much bigger than the political influences that are coming and going with centuries. It [tradition] goes through centuries and it will last forever,” Dr. Milkov said.

“It seems to me that this is much bigger. This is much more representative. This is the Chinese people itself and not the politicians of any kind.”

Dr. Milkov was conferred the academic title of Ph.D. in historical sciences. He has held various positions of increasing responsibility including, from 2005 to 2009, being Consul General of the Republic of Bulgaria in New York.

It was during this time that Dr. Milkov got together and worked with Mr. Tarpov on a series of annual Bulgarian cultural events.

“I’m very glad he’s succeeded,” Dr. Milkov said about Mr. Tarpov. “I would like to congratulate him first of all. I will meet him and I will speak with him a lot.

“I think that he’s first of all a very good professional because he’s able to cope with this combination. Obviously he’s well prepared. Obviously he has a broad musical culture in order to be able to perform like this,” said Dr. Milkov.

In fact, Mr. Tarpov has performed extensively throughout Europe and in his home country of Bulgaria. He’s especially experienced in working with young musicians as he founded the Young Soloists of New York chamber orchestra in 2004.

With Shen Yun, Mr. Tarpov conducts a very special orchestra composed of traditional Chinese instruments like the pipa, erhu, and suona leading the melodies as a Western symphony orchestra backs it up.

Dr. Milkov picked up on this arrangement and felt the Chinese influence was very well presented.

Shen Yun performs one more show in Ottawa on Sunday, Jan. 4, before moving to Montreal from Jan. 7 to 11.