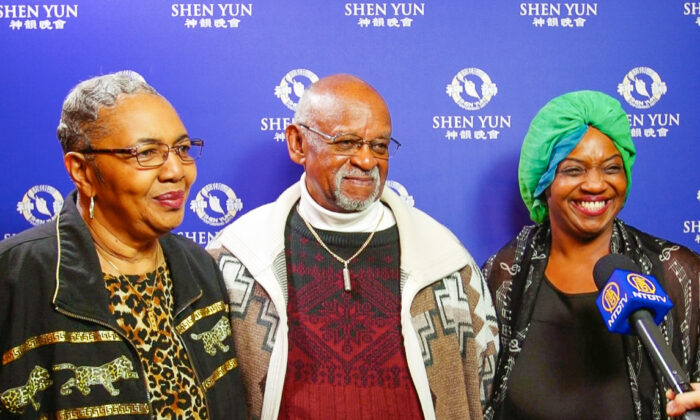 OMAHA, Neb.—Tonya Ward is an elected official in Nebraska and president and founder of Energy Rescue, Inc., a charity that helps Nebraska citizens who have fallen on hard times, and fallen through the cracks of other assistance programs, regain services such as electricity.

But on Feb. 25, 2020, Ward found herself handling another kind of energy: positive, spiritual energy that she felt coming from a production of Shen Yun Performing Arts who had just completed opening night at the Orpheum Theater in Omaha, Nebraska.

Ward, who is the Official of The Learning Community Douglas, Sarpy County, attended the evening with her parents, Sylvia and Ronald Ward.

“Oh, the whole [Shen Yun] performance was so enchanting,” Tonya said, “And it was magical and beautiful. Everybody was so pretty. Even the men—gorgeous. And I just love it.”

Tonya was at a loss for words to describe the performance she had just seen.

“You know, there isn’t really good words to describe. I mean, you say ‘brilliant, beautiful, enchanting, wonderful.’ And you just feel good seeing it, you know, being present. And everybody in the audience was too happy and kind. And everyone’s speaking with each other. And so my mom and dad brought me tonight and I get to be the third wheel. But I’m grateful. Because we [have] got to see it again. And I’ll bring my kids.”

“Love it,” Sylvia said, Tonya’s mother. “This is our second time. And I’m planning on coming next year.”

Ronald Ward may be the family’s biggest fan. “I’ve seen [Shen Yun] three times. I saw once in DC, and twice here. I’ve enjoyed it every time. Been very, very nice,” he said.

A Heartfelt Experience at Shen Yun

But what lies at the heart of authentic Chinese culture is its spirituality and connection to the divine, an aspect that’s pervasive throughout Shen Yun’s performance and which Tonya was most impressed by.

“It’s—everything about the Chinese culture is in, it just encompasses everything, so beautifully intricate, the colors, the technology that they added to the film when the angels flew out at us. Oh my goodness! I just, I couldn’t be happier,” the Nebraska official said. And to the performers themselves: “Thank you.”

She elaborated on how the divinely-inspired aspects of Shen Yun made her feel. “That was just magical. I don’t know how to describe it, because it’s beautiful and it makes you feel so emotional. All the colors, all the details, that went into the production. Amazing. Just brilliant. Brilliant.”

Two pieces in the performance depict an ancient Chinese legend about the Creator. These pieces were especially moving for Tonya. “My goodness. It made me cry. It really made me cry. I think I cried the whole time. Happy tears, just happy,” she said.

Ronald is a musician and he reveled in hearing Shen Yun’s orchestra which travels wherever the production goes to provide accompaniment.

“I play violin, cello, and piano, and I listened to the orchestra,” Ronald said. “I’m really interested in the music. The music is really different from what we have here, and I looked at the instruments on the program it showed what the, the violin, viola, double bass. … So it was really nice to have the orchestra here and listen to their music.”

“I play the drums, I sing, and I’m a musician as well,” Tonya said. “So the drums came out with those wheelbarrows of gold. I was just enchanted, just wow, I want to get up there with them and start drumming.”

In the end, Tonya was incredibly grateful to be able to experience Shen Yun and thanked the performers directly.

“Thank you so much for your beautiful, outstanding performance. The whole time I had hot tears pop out my eyes, and I was so happy. And I want to see it again right now. … Thank you so much. We appreciate you all,” she said.