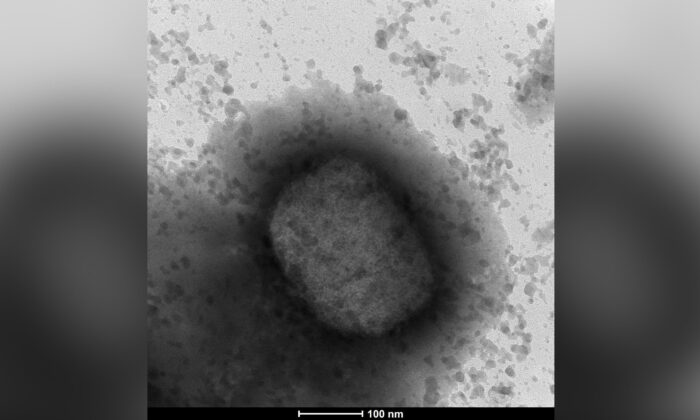 An electronic microscope image shows the monkeypox virus seen by a team from the Arbovirus Laboratory and the Genomics and Bioinformatics Units of the Carlos III Health Institute (ISCIII) in Madrid, May 26, 2022. (The Canadian Press/AP/Unidad de Microscopia Electronica del ISCIII-via)
News & Discoveries

The first monkeypox deaths outside of the African continent have been reported in Brazil and Spain, with the latter seeing a second death in a matter of hours.

Brazil was the first to report a monkeypox death on July 29. A 41-year-old man who was suffering from lymphoma and a weakened immune system was the victim. Brazil’s health ministry insisted that the “comorbidities aggravated his condition,” according to the BBC. The individual, hospitalized in the city of Belo Horizonte, died from septic shock after he was taken to the ICU.

Brazil has so far reported 1,066 confirmed cases of monkeypox, with 513 additional suspected cases. The state of Sao Paulo accounts for the vast majority of cases. Over 98 percent of confirmed incidents have been found among men who have sex with men, according to ministry data.

Shortly after Brazil announced its first monkeypox death, Spain also announced the same, becoming the first country in Europe to register a death from the illness. The victim had suffered from encephalitis, an inflammation of the brain which is associated with the infection. The death occurred in the Valencia region in the northeast. On Saturday, Spain reported its second monkeypox-related death.

In Spain, 4,298 monkeypox infections have been confirmed by the country’s health ministry. Of the 3,750 patients on which the ministry had information, 120 patients (3.2 percent of the total) have been hospitalized.

In the United States, 5,189 cases have been confirmed as of July 29 according to data from the Centers for Disease Control and Prevention (CDC).

New York registered the highest number of cases with 1,345 infections, followed by California with 799, Illinois with 419, Florida with 373, and the states of Georgia and Texas with 351 each.

Deaths in Brazil and Spain came as the World Health Organization (WHO) Director-General declared the monkeypox outbreak a “Public Health Emergency of International Concern (PHEIC)” on July 23. The vast majority of cases are in the “WHO European Region,” a news release said.

Epidemiologists are divided on whether the WHO emergency declaration was the right choice or not. According to Dr. Jimmy Whitworth, a professor of international public health at the London School of Hygiene & Tropical Medicine, the issue is a “tricky decision” for the WHO emergency committee.

“In some senses, it meets the definition—it is an unprecedented outbreak widespread in many countries and would benefit from increased international coordination,” he said, according to a commentary on The Epoch Times.

“On the other hand, it seems to be an infection for which we have the necessary tools for control; most cases are mild and the mortality rate is extremely low.”

In a recent interview with CNN, White House medical advisor Anthony Fauci said that an emergency declaration on the monkeypox virus was under “active consideration” by the federal government.