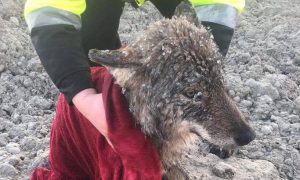 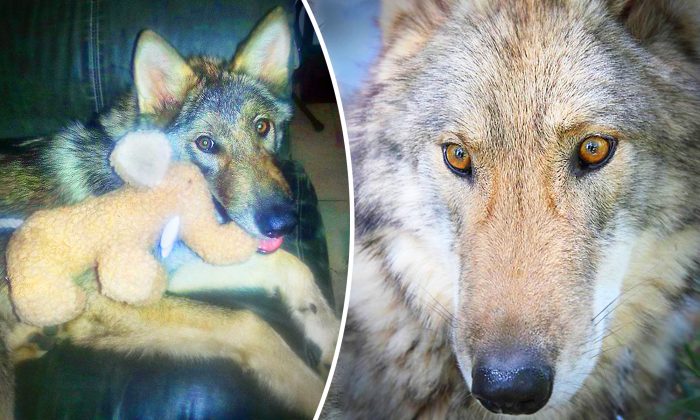 They found the little pup in a grocery cart; by all appearances, he had been abandoned there by his previous owner. Looking into the pup’s pitiful, pleading eyes, his long ears sticking up like a German shepherd’s, the 18-year-old from Tucson, Arizona, begged his parents to let him keep the canine. They named him Neo.

The abandoned pup forged a bond with his rescuer, the teenage boy. Other than that, getting Neo accustomed to domestic life was fraught with difficulties. Neo was terribly needy for attention and would require his owner to be with him practically every minute of the day. Neo would turn moody and anxious around other people, ignoring them and avoiding eye contact.

He also proved impossible to potty train. Neo went number one and number two all over the place inside. By his behavior and lack of trainability, it was clear that Neo was no ordinary puppy.

As Neo grew larger, it became obvious that both his looks and behavior weren’t like normal dogs. He was big and rangy; he was also strong and became somewhat of an escape artist. Neo would traverse the fence, getting into the neighbors’ yard to play with their German shepherds—such was Neo’s constant urge to seek companionship.

Even after they added height to the fence, it didn’t help. Neo would chew his way through somehow.

Soon, the neighbor became wary of the big leggy beast wriggling in and out of their yard. And his handlers decided that whatever Neo was, he was out of their control. And so, they sought help finding him a new home, somewhere where he belonged.

They took him to the Humane Society Arizona. Right off the bat, the animal rescue CEO, Maureen O’Nell, could tell Neo was no regular dog.

“I saw a couple walking a long-legged canine to the front door,” Maureen said. “It wasn’t his body composition that made me notice, but his behavior. Neo was completely avoidant of human interaction. The couple walking him seemed, as best as I can describe it, perplexed.

“I approached the couple and asked, ‘You know that isn’t a dog, right?’” O’Nell said. “They responded, ‘we were wondering.’”

Humane Society staff knew that Neo was almost certainly a wolf-dog, leaning heavily on the wolf side in terms of genetic traits. That would explain Neo’s constant need for companionship—he’s seeking a “pack” dynamic—plus his aversion to practically all human contact.

The Humane Society knew that Neo would need a special home; they set about looking and they located Wolf Connection, a ranch for partially domesticated wolves and wolf-dogs that are no longer able to survive in the wild. There, the wild-leaning canines’ pack-forming instincts are free to manifest. Meanwhile, visitors, especially at-risk youths, are brought in to connect with the animals. It’s described as a form of healing for both sides, human and animal.

Neo is now fully grown and has successfully integrated with the Wolf Connection community, reported Little Things. His development has also borne fruit; Neo has made lots of furry friends at the ranch and has also become more comfortable around people, joining in on hikes with ranch visitors.