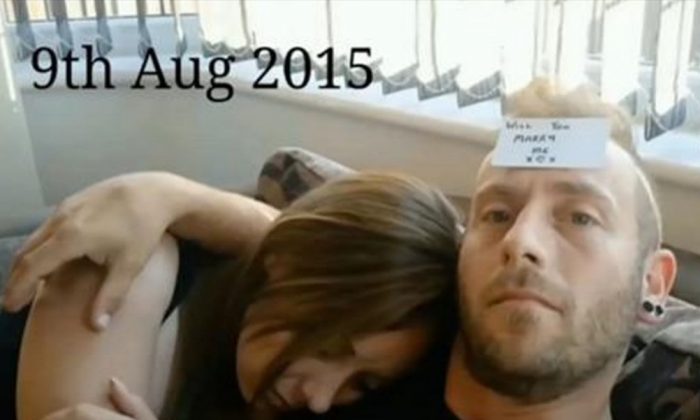 Boy Gets Girl With 148-Day Proposal

A man spent 148 days preparing to propose to his girlfriend on Christmas. Ray Smith, took a selfie with his now-fiancée, Claire Bramley, everyday starting on July 31 of last year.

Smith uploaded a Youtube video titled, “My unusual 148 day wedding proposal to claire,” showing all the photos from the last few months.

“It was hardwork not getting caught I took numerous photos incase she asked to see them and i’d showed her which ones I wanted, ” he wrote in the comments section.

Smith, a 38-year old from Grimsby, England said, “I have been planning to propose for a while and I knew I wanted to do something romantic, so I originally thought about popping the question in a hot air balloon,” reported the Grimsby Telegraph.

Smith searched for proposal ideas online including flash mobs, but decided to take a picture everyday for five months intent on surprising his girlfriend later on.

In every photo, there is a card that says, “Will you marry me.” She never noticed it.

Smith originally had planned to surprise Bramley at midnight on New Year’s Eve at a family party, but the party was cancelled.

Bramley was completely surprised at the proposal.

“I had no clue, I was totally oblivious to it all,” Bramley told the paper. “I was totally surprised, but in hindsight it’s exactly the kind of thing he does. He likes to do romantic things.”

Such dedication paid off. When asked how he hid it, Smith said, “I told her I was taking the pictures to track the progress of the baby, which was a little bit of a ruse.”

“It was really stressful putting it all together, it took a lot of hard work. She nearly caught me a couple of times but I just had to pray it worked,” he said.