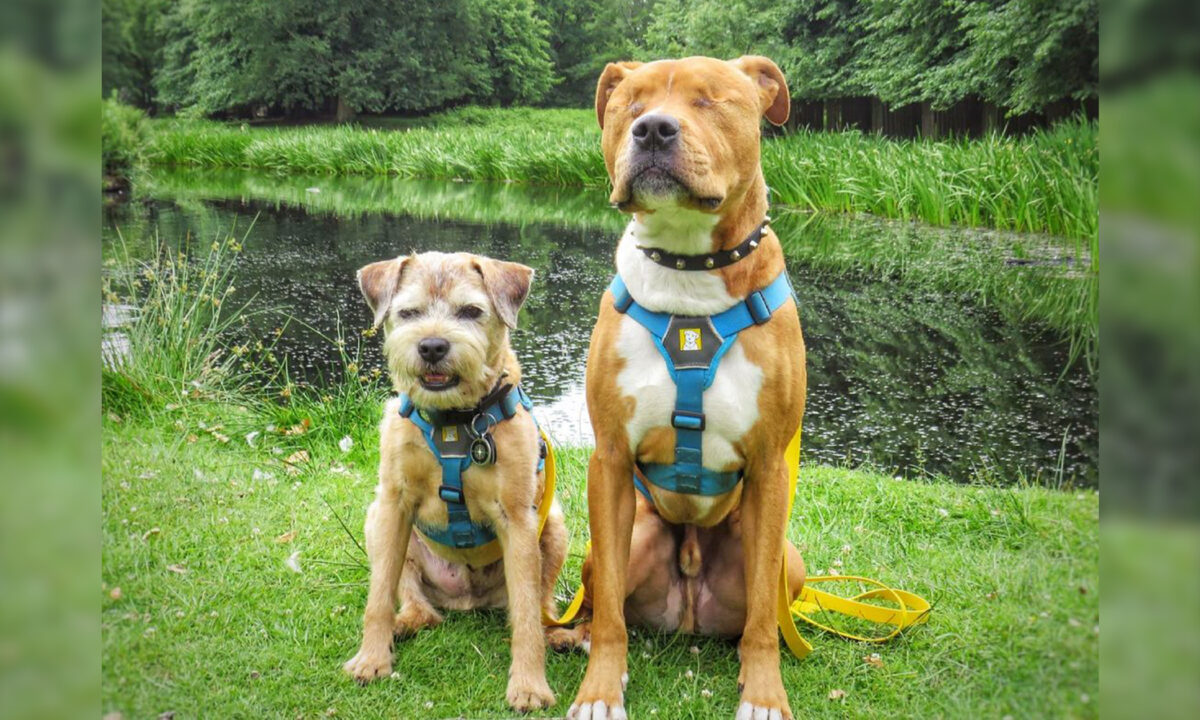 This dog may be blind, but neither he nor his adoptive owner is letting his lack of eyesight hold him back. With the support of his canine sibling, who has become his “tiny bodyguard,” the trio embarks on intrepid adventures across the United Kingdom, even hiking the mountains of Snowdonia.

Amos, a Staffordshire cross, was born in an animal shelter after his mother was rescued by Cheshire Dogs Home, Warrington, in 2017. Blind at birth, Amos was one of only three survivors from a litter of eight, and quickly stole the heart of his foster carer.

Shelter volunteer and foster carer Jess Martin, 29, recalls vets suggesting that the “kindest thing to do” would be to remove Amos’s eyes later in life. “His retinas were detached,” Jess told Cheshire Live, “and whilst there was an operation to reattach them, it would have been like putting a plug in a faulty socket.”

Amos suffered constant migraines due to build-up pressure. He also lacked the instinct to blink, meaning he was “constantly poking himself in the eye by accident,” said Jess.

He thus had his eyes removed and sewn up when he was 8 months old.

Jess became his medical foster carer but was initially worried about how her rescued border terrier, Toby, might react.

“After his operation, Amos smelt really surgical, and looked like an extra from a horror movie with his eyes sewn shut and covered in blood,” she said. “But Toby instantly became his tiny bodyguard.”

Toby, a former Cheshire Dogs Home mascot and therapy dog for dementia patients, had been the only dog in Jess’s home for eight years. After a slipped disc injury, he was choosy about interacting with other dogs, yet Jess says that Toby started helping his blind foster brother immediately after he was brought home.

“We weren’t sure if Amos had had anything to drink,” Jess said, “and then we saw Toby go and take a loud drink from the bowl and pushed Amos towards it to show him where it was.”

After Amos had acclimatized to the surrounding, Jess started taking both dogs on walks together. Amos would take an hour to complete a 15-minute turn around the block. However, Toby became his eyes, gradually boosting Amos’s confidence to interact with the outside world.

Increasingly, Jess feared a future adopter might “wrap him in cotton wool,” so she made a decision to adopt him. She knew it wouldn’t be easy, but she also knew she could give Amos the life he deserved.

“It’s my responsibility to make my dogs’ lives as fulfilling as they can be,” she explained. “I didn’t want Amos to end up getting treated like a house cat.”

Today, Amos is 4 years old and living his best life. He is constantly exploring the Great British outdoors with Jess and Toby.

Amos has also started out biting Toby’s tail gently, to keep him close by, but the pair has since developed a “body bumping” technique. The blind Staffy has even learned to respond to Jess’s verbal commands.

“Amos is like a little mountain goat,” Jess said. “We’ll tell him if he needs to step up and he will lift his paw a little, but if you say there’s a big step, he lifts it a lot higher … He just gets a little wary if he can hear water, but Toby is always there to help him out.”

Jess shares life with her canine chums on a dedicated Instagram page, jessyyandthewonderdogs. As of August, the dogs are training in scent work together.

“We had such a fab time and can’t wait to go again,” Jess posted. Toby, she shared, is “progressing really nicely and his problem solving during searches is just amazing!” Amos is “growing in confidence with the searches and just loves working his nose,” she added.

As their adventures continue, Tony and Amos, the blind dog who found the perfect forever home, remain inseparable.