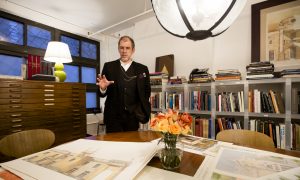 Affirming the Art in Architecture
0 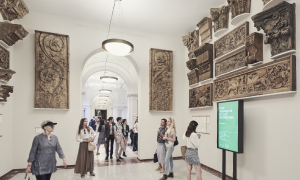 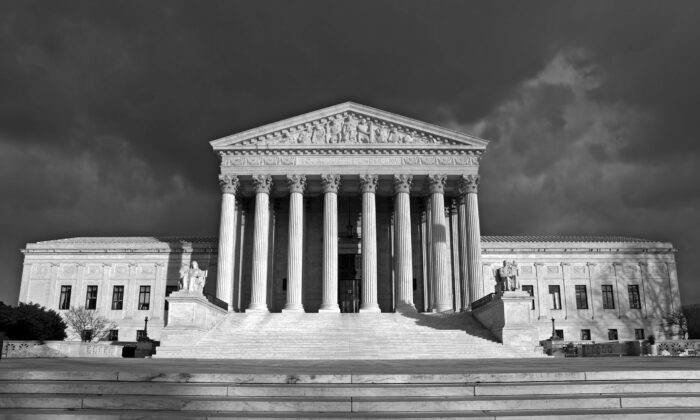 The design of the U.S. Supreme Court is based on a Roman basilica.  (The History Press)
Literature

Take a patriotic tour of Washington
By Lorraine Ferrier
Print

When life is chaotic, we often return home for respite. We may look to our family, faith, and community for personal guidance and seek out comfort in places familiar to us. We revisit these home comforts to anchor ourselves in the values important to us and to remind ourselves of our heritage.

But what can we do when our nation seems divided and chaotic?

Citizens of the United States could look to the ideals that America’s forefathers founded the republic on, the values inherent to America’s greatness, such as beauty, goodness, and truth.

Reading books such as “Classical Architecture and Monuments of Washington, D.C.: A History & Guide” by Michael Curtis can remind us of the values that America’s Founding Fathers lived by and how they looked to ancient Greece, in particular, in the hope of building a great nation of virtue.

Curtis writes in the preface that the aim of the book is to teach the principles of art and political philosophy as they were understood by America’s founders. He focuses on the “ancient antecedents of our political philosophies, stylistic precedents of our architectural forms, and of the Founders’ classical vision.” He also explains the significance of designing the District of Columbia in the classical tradition.

In addition, Curtis gives examples of how progressive modernism destroys the traditions that America’s founders fought for so fiercely and literally set in architectural stone, and why it’s important to hold true to the founders’ vision.

The US Capitol: The Founders’ Vision

The book is divided into nine classical heritage tours that were originally devised for the National Civic Art Society to “extend the Founders’ aesthetic vision and to teach the founding principles.”

Curtis has written the book in such a way that it can be enjoyed as a stand-alone text, not just as a guidebook. However, this is not a definitive guide to Washington; Curtis never says it is. Yet he imparts an incredible amount of fascinating information, presented with patriotic passion, so that it’s a book you’ll refer to again and again.

In a short “Preparation” section, Curtis suggests that tour participants should have a working knowledge of the Constitution (including the Bill of Rights) and that it would be useful to bring a copy of the Declaration of Independence to easily refer to the purpose, plan, art, and architecture of the city. For convenience, an abridged version of the Declaration is in the appendix.

The book gives good insight into why beauty matters in our built environments, and it may make you look differently at the buildings and public spaces in your area.

Curtis makes an astute generalization in “Tour VII: Decline of Purpose.” He says: “You will notice that buildings that are true to the nation’s founding principles are beautiful, celebratory or solemn, appropriate to humanity, fitting the vicissitudes requisite of the citizen; then you will notice that buildings true to the tenets of scientific progressivism confront humanity with opposition, that they are scaled to the state, not to the citizen.”

Interestingly, Curtis shows the importance of how a building’s design can inform and inspire its occupants. For instance, the U.S. Supreme Court is based on a Roman basilica. To enter the court building, visitors must first ascend a number of steps, which are flanked at the top by statues of “The Authority of Law” and “The Contemplation of Justice.” They then walk between high columns on top of which is a pediment with sculptural reliefs depicting liberty, order, authority, and the like. He says, “We are meant to feel the majesty of Law and we do.”

Curtis wonders if “government employees in progressive buildings feel that patriotic pride we citizens feel in ‘classical’ buildings such as the National Archives, the Lincoln Memorial, [and] the Federalist Triangle.” In contrast, there’s the modernist Lyndon Baines Johnson Department of Education Building with its uniform rectangular windows that stretch across the vast building. Curtis believes that if the education building was full of “noble statuary, civic inscriptions, and naturalistic architectural details,” then it would be all the better for education.

‘The Statue: Virtue in Human Form’

In the book, Curtis reminds us of the important purpose of civic statuary based on ancient principles. For instance, in “Tour IV: The Liberty Stroll,” under a heading called “The Statue: Virtue in Human Form,” he shows how statues are not mere monuments to men of the past; they are markers of exemplary attributes of man that we can all espouse.

He also reminds us of the difference between sculptures and statues: “A statue is an ideal of a man made real, it is a thing different from sculpture, which might contain any idea large, small or insipid of anything or non-thing or nonsense.” In the same passage, he goes on to say that the statue maker “creates the idea of a man from what the conscious soul understands of the many facets of God active in the universe.”

In “Tour V: Honoring Heroes,” Curtis draws our attention to the Martin Luther King Jr. Memorial, which, unfortunately, does not honor the Civil Rights leader. The statue’s pose is unwelcoming, almost hostile. And despite King’s being a Christian minister, the memorial makes no reference to God. When you realize that King’s statue was designed by Lei Yixin of China, then it makes sense: Yixin was trained to make Communist Party statuary that exudes dictatorship and is devoid of divinity because the Chinese regime is atheist.

The essence of King’s statue is far from what King and the founders believed in. Thomas Jefferson’s words come to mind, which Curtis quotes, as inscribed on a frieze on the Jefferson Memorial: “I have sworn upon the altar of God eternal hostility against every form of tyranny over the mind of man.”

In another inscription on the memorial, which quotes Jefferson in a letter to George Washington: “God who gave us life gave us liberty. Can the liberties of a nation be secure when we have removed a conviction that these liberties are a gift from God?” Memorial inscriptions such as these remind us of the nation’s values of faith and virtue.

The Importance of Knowing Our Civilization

A nation’s history will always be relevant to its people. Because lessons from history are not emotionally charged with the politics or passions of the day, they should enable us to take a step back and see solutions more clearly. Therefore, history presents us with examples of how to be better and how to mediate chaos.

In “Tour II: Capitol Hill,” under the heading “The Problem of Governance,” Curtis quotes a prophetic George Orwell, who said: “The most effective way to destroy people is to deny and obliterate their own understanding of their own history.”

In the tour, Curtis explains how U.S. law, in particular, protects citizens. For example, he quotes English scholar Alcuin of York who in the eighth century warned: “Those people who say ‘the voice of the people is the voice of God’ should be ignored, because the riotous crowd is almost always crazy.”

In a later passage, Curtis goes on to say that America’s forefathers understood people’s propensity to error. So to safeguard the country from the tyranny that can come from democracy or monarchy, they created three branches of government—the executive, legislative, and judicial—”each branch chastening the other, and this chastening, this contemplation, this cooling, this delay have prevented us from tearing one another apart.”

“Classical Architecture and Monuments of Washington, D.C.: A History & Guide” is an absolute gem of a book for all who treasure America—its founding and future. The book should be required reading for school students and for prospective U.S. citizens.