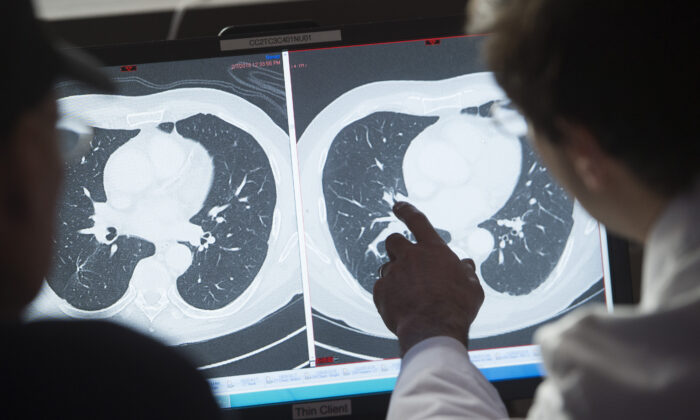 Dr. Christian Hinrichs, an investigator at the National Cancer Institute in immunotherapy for HPV+ cancers, shows a patient, a survivor of metastatic cancer, the difference between his CT scan showing cancerous tumors (R) and a clean scan after treatment (L), at the National Institutes of Health (NIH) in Bethesda, Md., on Feb. 8, 2018. (Saul Loeb/AFP via Getty Images)
Health Care System

Big Pharma Paid $24 Million to 1 Percent of US Oncologists, Many in High-Profile Positions: Study

One percent of U.S. cancer doctors, many with leadership roles in hospitals, academia, national health institutes, and guideline-making, received over $24 million in payments from cancer pharmaceutical companies in 2018, according to a new study by Queen’s University in Canada.

The study found that 139 oncologists—representing 1 percent of all American cancer doctors—were given over $100,000 in general payments, with a median payment of around $154,000, and a total of $24.2 million.

“A payment of this magnitude creates a high risk” of conflict of interest, the authors wrote in the study, with $10,000 considered to be a significant payment by the U.S. Department of Health and Human Services.

The payments to these doctors made up 37 percent of all payments to oncologists in that year, including consulting fees, speaking fees, honoraria, and travel expenses from cancer medication companies.

“The findings identify a risk for perceived and real conflict of interest. Because of the leadership positions they hold, the potential impact of this small group of physicians on oncology practice and policy may be substantial,” the study’s lead author Dr. Anthony Booth told MedPage Today.

Further, the payments raise the concern that doctors may prescribe medication that is not as suitable for cancer patients, as conflict of interest “may be particularly problematic in oncology, as treatments are expensive, often have significant toxicities, and may be associated with modest benefits.”

The study authors found that 95 percent of these doctors were still practicing medicine, with many considered top-rated cancer doctors at the state or national level.

Many were also in medical leadership positions with 60 and 72 percent currently or previously holding hospital leadership or faculty appointments. One quarter—24 percent—have worked on journal editorial boards, and 21 percent have held leadership posts in special associations.

In particular, 10 percent have drafted clinical practice guidelines in committees for the past 5 years.

Many committees have rules on how much an author of guidelines is allowed to receive. The NCCN will challenge members if an individual receives more than $20,000 a year, which is only one-fifth of the baseline in the study.

A previous study also showed that only 16 percent of NCCN guideline authors did not accept general industry payments with other studies showing that NCCN guideline committees have higher financial ties to the industry than other oncologists.

“Oncology specialty associations, guideline panels, and journal editorial boards should reconsider if it is appropriate for physicians with such large payments to hold these high-profile positions,” the authors wrote.

They noted that revenue from pharmaceutical oncology drugs has increased by 70 percent over the past decade, while revenue in non-oncology drug revenue has decreased by 18 percent.

At the same time, the number and value of those payments to oncologists have also increased.

However, previous studies have shown that even “modest payments can influence physician behavior.”