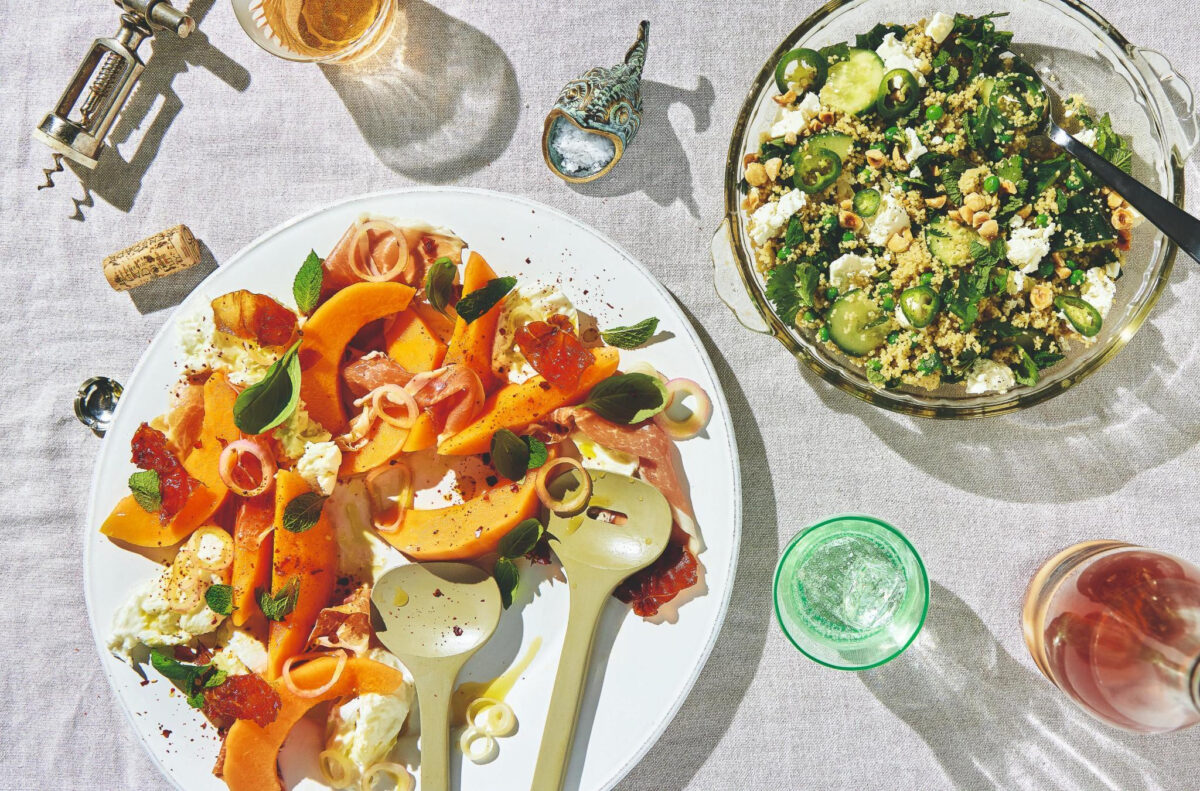 Stunning summer salads make the most of the season’s bounty
BY Crystal Shi TIMEJune 10, 2022 PRINT

Run, don’t walk, to your nearest farmers market—the stands are about to burst with a rainbow of glorious, summer sun-ripened produce. There’s no better time to turn it all into a big, beautiful salad.

For inspiration, we’re turning to chef, author, food stylist, and seasoned salad guru Elena Silcock, whose newest cookbook, “Salads Are More Than Leaves,” offers a cornucopia of dazzling examples. (We’re convinced.) Follow her expert tips and recipes for salads that will refresh and impress, all summer long.

I could have filled my book with tomato salads, but I held back and instead chose a couple that I feel really hit the spot. This one is packed with cherry, chunky, and sun-dried tomatoes. I like to serve the pecorino in big fat wedges, but feel free to shave it over the top if you prefer.

Subs: Use a vegetarian hard cheese. Use vegan Parmesan-style “cheese,” or omit.

Get ahead: Salt the tomatoes up to an hour in advance. Make the croutons and dressing in advance.

Nice on the side: Pastas, focaccia, or grilled meats.

Cut the large tomatoes into wedges. Halve the cherry tomatoes. Put both in a large mixing bowl and season generously with salt while you make the rest of the salad. (Salting your tomatoes removes some of their water and consequently intensifies their flavor.)

Make the croutons: Preheat the oven to 350 degrees F. Spread the croutons out in a roasting tray, drizzle with the oil, and season generously with salt. Toss well, making sure that the croutons are well coated with the oil. Roast for 10 to 15 minutes. Set aside to cool before using.

Whisk up the dressing in a large mixing bowl.

Drain the salted tomatoes in a sieve and add to the dressing. Add the sun-dried or semi-dried tomatoes to the bowl. Toss, taste, and season with extra salt if needed. Transfer to a large plate. Cut the pecorino into triangles and tuck into the salad, then top with the croutons, basil leaves, and a crack of black pepper.

I strongly advise serving this with toasted pitas, because spreading the charred feta across a pita wedge and topping it with the tomatoes and cucumbers is a joy I’d hate you to miss out on.

Subs: Use vegan feta-style “cheese” or firm tofu and swap the honey for maple syrup.

Get ahead: Make the dressing in advance.

Nice on the side: Filo pies, whole baked fish, or oregano chicken

Slice the tomatoes and cucumbers into chunky wedges. Put in a large mixing bowl along with a big pinch of salt, toss gently, and set aside.

Preheat the broiler to high. Whisk up the dressing in a mixing bowl. Peel and finely slice the red onion, then add to the dressing and set aside.

Line a baking tray with foil and place the blocks of feta. Top each with 2 thyme sprigs, drizzle with the oil and honey, and season with a little black pepper. Slide under the broiler and broil for 5 to 7 minutes, until the feta is softened and golden on top. Remove and set aside to cool a little. Toast the pita bread, if using.

Drain the tomatoes and cucumbers—salting them in this way maximizes their flavor—then return to the bowl. Add the dressing and red onion along with the olives and the 2 teaspoons dried oregano. Toss well, taste, and season.

Transfer to a platter or bowls. Top with the feta, either breaking it up or slicing each block in half diagonally and adding it in whole pieces. Finish with an extra pinch of dried oregano, the mint leaves, and a crack of black pepper. Alternatively, serve the feta on the side for people to break into as they eat. Serve with the pita chips or toasted pitas.

Using frozen peas in salad was a bit of a revelation to me. They defrost as you toss the salad, but they also keep everything cold and fresh.

Subs: Swap the honey in the dressing for sugar or maple syrup and the feta for firm tofu.

Get ahead: Make the couscous up to 24 hours in advance and set aside to cool completely, then toss with the peas and store in an airtight container in the refrigerator. Roast the nuts in advance.

Nice on the side: Chicken, fish, sausages, or slow-cooked lamb shoulder

Put the couscous into a bowl with a pinch of salt. Pour over the measured boiling water, cover with plastic wrap, and leave to sit for 10 minutes. Remove the plastic wrap, fluff up the couscous with a fork, and then leave for 10 to 15 minutes to cool to room temperature.

Meanwhile, whisk up the dressing including the extra tablespoon of vinegar in a large mixing bowl. Finely slice the chile, add to the dressing, and set aside. Roast the nuts: Preheat the oven to 350 degrees F. Spread the nuts out in a roasting tray, and roast for 15 to 20 minutes until golden; cooking the nuts at a relatively low temperature means they become golden and sweet rather than risking them turning dark and bitter-tasting.

Add the peas to the chile in the bowl and top with the couscous—the residual heat will defrost the peas. Chop the cucumber into 1/2-inch chunks and add to the bowl. Pull the herb leaves from the stems, roughly chop, and add most to the bowl. Toss, taste, and season generously with salt and pepper, adding more vinegar to taste. Add the feta, crumbling it into chunks with your hands, and gently toss again—you don’t want to break up the feta too much! Top with the remaining herbs. Roughly chop the roasted nuts and sprinkle on top.

I couldn’t not. Ham and melon is the fruity salad that everyone has a little love affair with. However, once you’ve made this crispy ham for the top, you’ll never go back to a simpler version of this classic again.

Subs: Omit the ham, and make sure your mozzarella is vegetarian, or omit the ham and the mozzarella and add a handful of roasted nuts and some plant-based bacon instead.

Get ahead: Make the dressing in advance.

Nice on the side: Other salads for a big, fresh summer lunch

Whisk up the dressing in a mixing bowl. Peel and finely slice the shallots into rings, then add to the dressing and set aside.

Heat a tiny splash of olive oil in a frying pan over medium-high heat. Line a plate with kitchen paper. Use scissors to cut 1-3/4 ounces of the prosciutto or Parma ham into strips directly into the pan. Fry for about 5 minutes until crispy. Transfer to the lined plate to drain. Alternatively, you can roast the ham on a baking tray lined with nonstick baking paper in the oven, preheated to 400 degrees F, for 10 minutes.

Halve the melon and deseed. Cut each half into about 6 wedges, then slide the knife along the base of each wedge to separate the flesh from the skin. Pile on to a platter. Tear the mozzarella balls into pieces and snuggle them into the melon.

Tear up the remaining ham and add it to the platter. Spoon over the shallot rings and dressing—you might not need it all here, depending on how tasty/juicy the melon is! Top with the crispy ham. Pull the herb leaves from the stems and sprinkle over the salad, then finish with a crack of black pepper and, if using, the chile flakes.

I’m obsessed with potato salads. They are the ultimate crowd-pleaser, so everyone loves the person that makes a good version. This crispy one is a potential favorite of the book.

Get ahead: Boil the potatoes up to 2 days in advance, rinse until cooled, and drain, then store in an airtight container in the refrigerator. Crush and then roast and broil them from cold—they may take a little longer. Make the dressing in advance.

Nice on the side: Fish, chicken, and pretty much anything non-carb based. Did I mention that I love potato salad?

Preheat the oven to 425 degrees F. Scrub the potatoes if dirty, then put them into a large saucepan, cover with water, and add a big pinch of salt. Place over high heat, bring to a boil, and cook for 15 to 20 minutes, depending on size, or until a knife slides through them without any resistance. Don’t let them go too far, as you don’t want to be serving mashed potatoes!

Meanwhile, line a plate with kitchen paper. Heat a large frying pan over a medium-high heat, add the pancetta along with a splash of the oil, and fry for 5 to 7 minutes until crispy. Transfer to the lined plate to drain. Reserve the fat.

Line a baking tray with foil. Drain the potatoes well, then add to the tray and use a fork or spatula to gently press them down until the skins burst and they flatten. Drizzle with the reserved pancetta fat plus 1 to 2 tablespoons of the olive oil and season well with salt and pepper. Roast in the oven for 20 to 30 minutes. Turn the broiler to high, slide the potatoes under the broiler, and cook for another 10 minutes until crispy.

While the potatoes are crisping up, mix the dressing. Remove the outer layers from the spring onions.

Transfer the potatoes to a platter. Put the spring onions on the baking tray, drizzle with the remaining oil, and season. Broil for 10 minutes until they’re charred and softened, then snuggle onto the platter with the potatoes.

Drizzle with the dressing, sprinkle with the capers and crispy pancetta, and use scissors to finely snip the chives over the top.

Put the oil and lemon juice in a large serving or mixing bowl, season generously with salt and pepper, and whisk until combined. Alternatively, put the ingredients in a clean jam jar, screw the lid on tightly, and shake well. Store the jar in the refrigerator for up to a week.

Put the oil, vinegar, honey, and mustard in a large serving or mixing bowl, season generously with salt and pepper, and whisk until combined. Alternatively, put the ingredients in a clean jam jar, screw the lid on tightly, and shake well. Store the jar for up to a week.

Put the yogurt (or crème fraîche), honey, mustard, and vinegar into a mixing bowl, season generously with salt and pepper, and stir together until combined. Store in an airtight jar in the refrigerator for up to 2 days.

All recipes reprinted with permission from “Salads Are More Than Leaves” by Elena Silcock, Hamlyn.