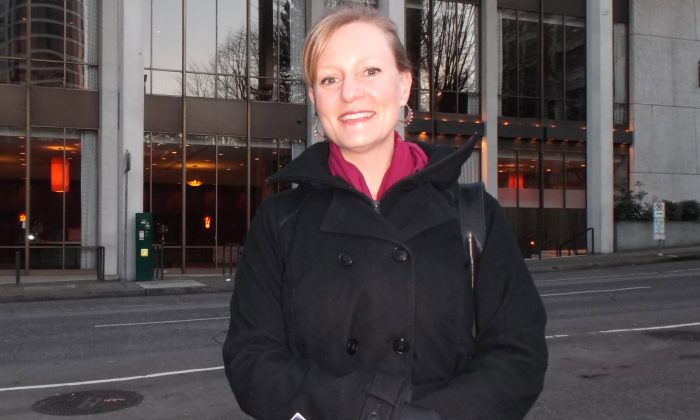 “We thought it was fantastic. Such beautiful choreography, the music was lovely, the singers were very talented, too,” said the performance auditor for the State Secretary of Oregon.

With her six-year-old son, who was introduced to Asian studies at school, she attended the New York-based matinee performance on Jan. 19.

“I think some of this resonated for him,” Ms. Preeg Riggsby said, adding that her son really liked the dances, notably Monkey King Thwarts the Evil Toad and the Lantern Joy.

She was referring to a couple of the mini-drama pieces enacted in classical Chinese dance and that are intertwined with hi-tech digital backdrops.

According to the company website: “A unique feature of Chinese civilization is that its history has been documented and passed down uninterrupted for 5,000 years, sometimes in vivid detail.”

Ms. Preeg Riggsby was captivated by the dance Lotus Fairies, a dreamlike piece where dancers hold long silken fans while gliding across the stage like celestial fairies in flight. Their soft steps are never hurried, always light, as they scatter a fragrance of serenity from the heavens, the program explains.

“I think because of the way that the dance and costumes interplay, [it’s] really beautiful,” she said. “It’s the first time seeing it in this presentation, and it was beautiful. And it was interesting to learn how some of the classical Chinese dances influenced dance in other parts of the world, including the United States.”

She also learned of the communist regime’s suppression of traditional, divinely inspired culture for the past 60 years in China.

However, since 2006, Shen Yun has been traveling the globe on a mission to reawaken the almost lost heritage.

Based on this revelation, Ms. Preeg Riggsby began thinking about the “freedoms we have here” versus other countries, particularly China.

To this end, she added that Shen Yun was “pretty impressive.”

“It’s too bad that it’s not allowed there,” she concluded.