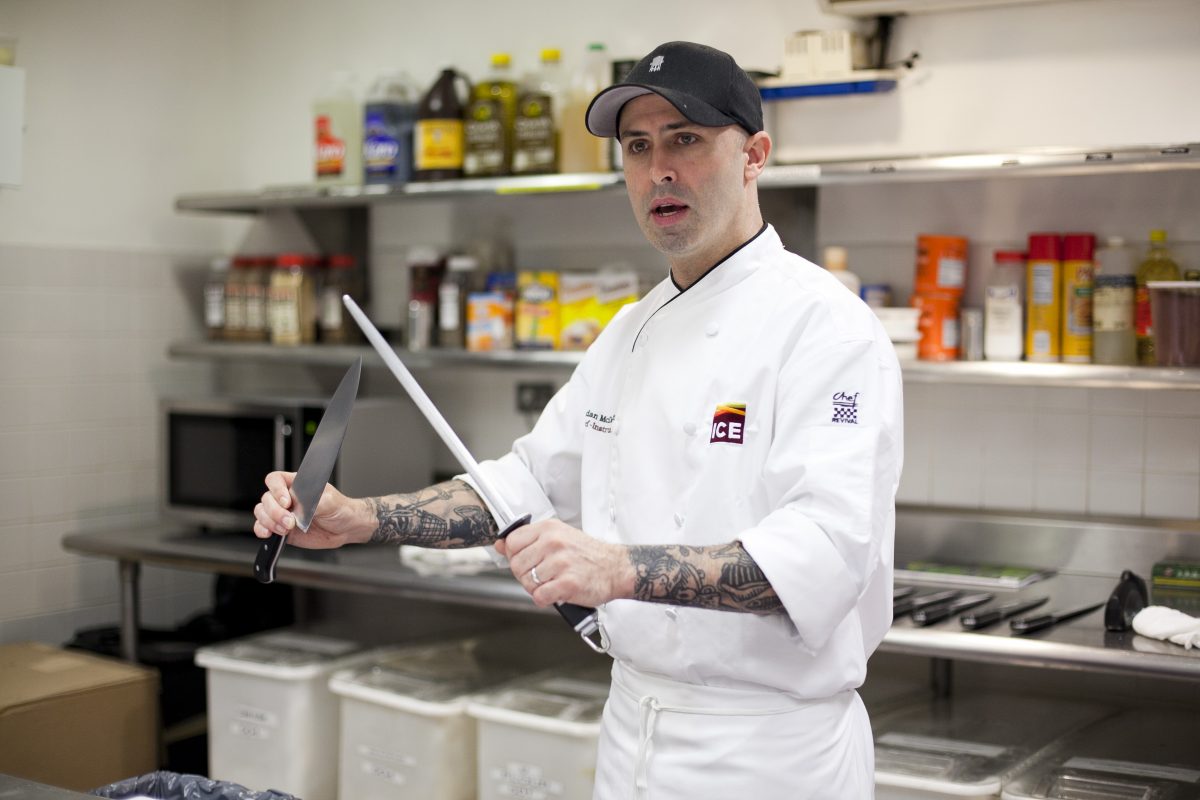 Chef Brendan McDermott at the Institute of Culinary Education, where he teaches knife skills to 2,000–2,800 people every year. (Samira Bouaou/Epoch Times)
Food

Be Your Own Kitchen Samurai

Learn to handle a knife, and you'll save time, money, and your health
BY Channaly Oum TIMEOctober 13, 2013 PRINT

NEW YORK—I remember once sizing up a butternut squash, plotting entry and exit strategies, only to go at it with an itsy-bitsy fruit knife and a prayer that my fingers wouldn’t become part of the dish that night.

The struggle was awkward. Human vs. vegetable—a weirdly shaped one at that, hard, tough, and all tricky, slippery curves. The knife got stuck half-way through, and the rest is a clumsy, messy blur.

If you too have been caught talking tough to a vegetable for the same reason, a remedy is called for: improving your knife skills.

Chef Brendan McDermott, who has taught knife skills for the last eight years, started at Brooklyn Kitchen, and now teaches at the Institute of Culinary Education, where anywhere from 2,000 to 2,800 people enroll for his class every year.

He started seeing the popularity rise with the onset of the recession. More people wanted to cook at home. “It’s also that cooking has become a little bit more intriguing for people than it used to be,” he said.

Learning to use a knife properly saves a lot of time in preparation.

“You can cut your time in half or more,” McDermott said.

A salsa that would normally take you 20 minutes to make, with proper knife skills, can take you less and less time to prepare, down to possibly 6 minutes.

Then there’s the cost savings. Think of restaurants: It’s more profitable for them to use a prep crew than to buy already diced and cut produce, McDermott said. He knows, having worked at restaurants like Mesa Grill, Patria, and Olives.

In grocery stores, consumers pay for a significant markup for buying pre-cut produce or meat.

Not least of course, is learning to use a knife safely. Take the bagel alone. There’s a reason why so many contraptions to cut a bagel have been invented. There are enough injuries that medical stats have created a category called BRI, or Bagel-Related Injury.

And that’s not to mention all those tricky vegetables like butternut squash.

McDermott’s class take place several times a week. As an instructor he sees all kinds of behaviors that have to be unlearned.

McDermott says invariably students come into the class tense. “That whole intensity slows us down, makes it tiring to cook. I see it in almost everybody.”

Too often, people tend to chop or push down on their food. Or to use the wrong part of the knife altogether, say the front or the tip, instead of the back part of the blade. Some lift their arms as they lift the knife; others exert a death grip on the produce.

“When you see chefs and it looks like we’re not doing any work … we’re not. We’re letting the knife do all the work for us.”

In the basic knife skills class, the students take on three vegetables, in increasing order of meanness: starting with docile celery stalks, to the more resistant carrots, and finally to those notorious tear-jerkers, onions. (All are eventually bound for the stock pot.)

Students practice using the back part of the knife, keeping fingers out of the way, and using an almost circular, with back and forth rocking action, rather than a chopping motion.

I joined the class on a recent Sunday morning, and with some feedback from McDermott—a slight adjustment, the feel changed dramatically; the cuts became more effortless.

“Once you understand how to hold a knife and control it, things change very quickly,” he said.

An interesting thing about McDermott is that he’s also a practiced martial artist. He started with taekwondo, went into Japanese jujitsu, and ended up focusing on northern Shaolin and Muay Thai.

The parallels between weapon training and boxing and cutting things, he said, “all break down to the same thing: It’s about relaxing—and letting things do what they need to do.”

“I see people trying to cut two pieces of celery and they’re doing this—they’re rubbing their hands. Gotta relax. Once you’re in that mode, you can go for hours and just do your thing.”

At the end of the class, McDermott demonstrated how to cut up a chicken in four portions—two breasts and two legs and thighs. That’s $12 for dinner for family of four compared to $60 for takeout. Plus, with home cooking, you get the rib cage, which can then be used to make a gallon of stock, or 16 cups of clear broth soup, along with—you guessed it—any peels or end parts of those vegetables you’re cutting up.

“Buy the right stuff, use it correctly, and you just save money. It’s pure basics. We’ve gotten so far from it, buying jars and cans and stuff—which is fine, but at least know what you’re going into.”

As an example, he mentioned the convenient, pre-cut baby carrots, which receive a chlorine solution bath. There are enough loopholes that even so-labeled organic carrots may go through the process, he said. It’s altogether a murky state of affairs.

When you cut things yourself, you control freshness.

He spent a year butchering an “insane” amount of pigs at Porchetta, an experience that gave him not only a good understanding of bone structure but also even more respect for animals.

McDermott has quite a collection of knives—scimitars, boning knives, Chinese chef knives, etc. His pride and joy is a 10.5-inch Japanese chef knife that can slice through a butternut squash standing up straight like a carrot.

Knife companies may try to market a dozen kind of knives, but in the end, for day-to-day use, you really need two knives.

“Fact is, on Friday night, 200 dinners, that’s what we use,” he said, holding a chef knife and a paring knife.

Most people use an 8-inch chef knife, but consider getting a 10-inch chef knife: it gives you more of the back of the knife blade area to work with, it’s more versatile and it’s safer, said McDermott. I found it amazing: it really felt like the knife was doing a lot of the work for you, and you were simply guiding it.

Use a paring knife to work on small items, and pinch the sides of the blade so you just have to keep an eye on the teeth.

If you want more knives, a third one might be a serrated knife (which most might call the “bread knife”), that you use like a saw, for items with a tough waxy exterior: butternut squash, watermelon, citrus, jalapeno peppers, tomatoes.

The fourth is a boning knife for butchering; it has a more flexible blade than a chef knife, allowing it to follow and cut meat along bones. (This knife is not for cutting through bone, however.)

“These four make you the kings and queens of your domain,” McDermott said.

There are beautiful knives to behold out there, in particular Japanese ones that are as much, if not more, works of art, with their delicate Damascus construction, as they are tools in a kitchen.

But they require a lot of care. For that reason, Tania Dalmau of Bowery Kitchen Supply at the Chelsea Market, recommends certain workhorse knives that do the job for much less.

For chef knives, the Mercer brand, which has historically furnished culinary schools and are quite durable ($52 for the 8-inch Mercer Genesis; $53 for the 10-inch chef knife).

Another alternative would be the Victorinox Fibrox, highly rated by America’s Test Kitchen. (8-inch or 10-inch, $49).