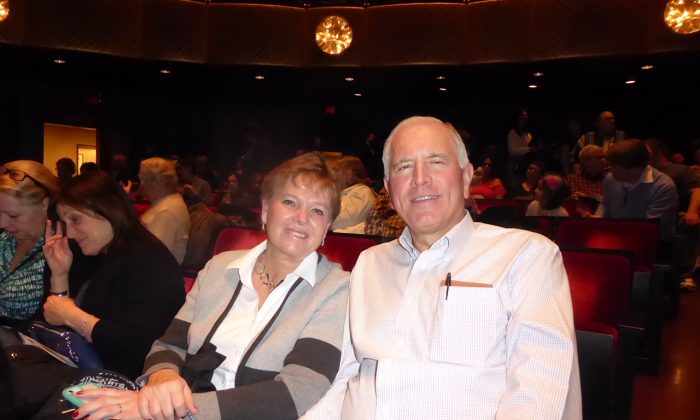 NEW YORK—While the gray streets of Manhattan shivered from the chilled rain and winds, the audience inside Lincoln Center were treated to radiant dance pieces and music encapsulating 5,000 years of traditional Chinese culture.

Classical Chinese dancers graced the stage in bright costumes, as the live orchestra filled the theater with dulcet melodies emanating from the interplay between Chinese and Western instruments.

It was this unique music that struck the CEO of RSI Bank, David Taylor.

“It’s very peaceful, it reminds me of nature,” Taylor said.

Taylor, who attended the performance with his wife Susan, a retired math teacher, said the combination of the dancing with the orchestration left him with a unique feeling.

“They just captivate me, so when I watch, they take me away,” he said.

“I’m not here anymore, they take me someplace else.”

Taylor was transported somewhere outside of nature, to a place akin to heaven, he said.

Susan said she also sensed an energy from the performance, one of relaxation and gentleness.

Shen Yun Performing Arts ended its first run of sold-out performances at Lincoln Center in New York City on Jan. 20. The company, one of six equally-large touring contingents, will travel to several northeast U.S. cities before returning to Lincoln Center in March for a second round of performances.

Twelve years ago, a group of artists formed Shen Yun Performing Arts in New York with one goal: to revive and share China’s ancient culture and traditions through song and dance. The company aims to showcase the values and virtues lying at the heart of this culture by telling stories on stage with classical Chinese dance.

For thousands of years, Chinese people believed in the divine, or heaven, and lived their lives according to principles that brought self-betterment, leading them closer to heaven. These principles included being truthful, following the course of nature, and showing respect towards your fellow man, nature, and the divine.

These traditions continued uninterrupted in China until the Chinese Communist Party seized power in 70 years ago. Through a wave of political campaigns, culminating in the Cultural Revolution in the 1960s and 1970s, China’s ancient beliefs and traditions were systematically destroyed and replaced with communist ideology that worshiped the party above all else.

“I think that’s one of the more important things in our country and in our world. To stay in touch with what got us here,” David said.

“We can always move forward, but don’t forget where we came from.”

David was saddened to hear that Shen Yun could not perform in the very country whose culture it celebrates.

“I think all culture needs to be shared by all people,” he said.

“Even your own culture needs to be shared with yourself and your families.”

For Susan, this fact made her appreciate living in a free country.

“I think people here should realize how fortunate they are that we can experience so many different things.”

With reporting by Frank Liang and Cathy He.