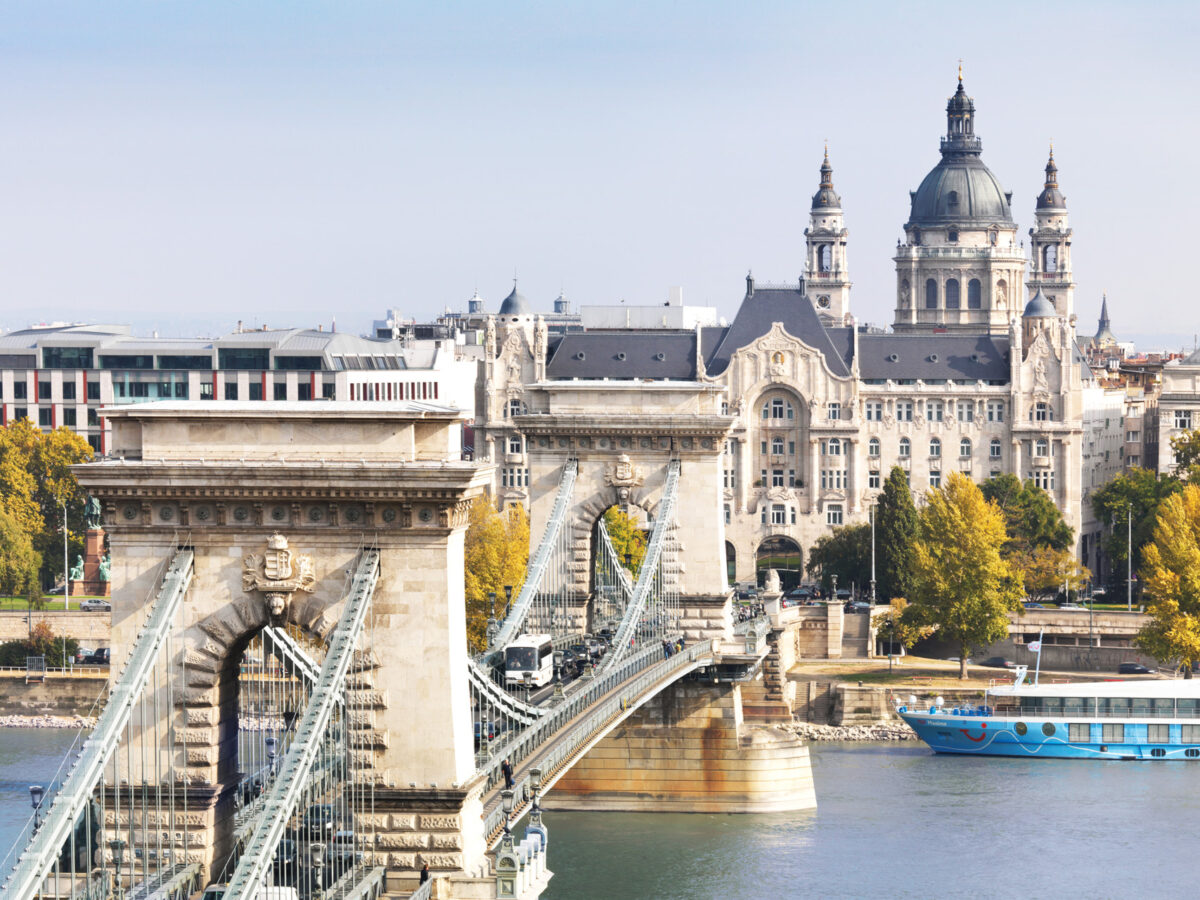 The Four Seasons Gresham Palace at the end of the Szechenyi Chain Bridge. (Four Seasons)
Travel

Back in Time: Finding the Glory Days in Budapest

The turn of the century—the illustrious fin-de-siècle—was a heady time for Hungarians. Created in 1873, the city of Budapest brought together the previously separate communities of Buda, Obuda, and Pest, quickly becoming a cosmopolitan national capital. Home not just to Hungarians (usually called Magyars), it attracted people from across Europe, and grew in wealth and power, to become a full, named partner in the Austro-Hungarian Empire. In 1896, Budapest became the first city on the continent to open an underground rail system, beating the Paris Metropolitan by four years. Europe’s largest parliament building rose from the banks of the blue Danube, its grand domes and spires still gracing that river to this day.

Subsequent years would not be so kind to this Central European nation. Two world wars, the collapse of empires, and especially four decades serving as a Soviet satellite state wore down a once-magnificent place. Budapest has recovered, economically, since the fall of communism, and newly-polished remnants of those glory days are everywhere, from the parliament to the heights of Fisherman’s Bastion, completed in 1902, to the pillars and soaring colonnades and columns at Hero’s Square. Opened in 1900, it is perhaps the most perfect manifestation of Hungarian pride, the statues there celebrating the greatest figures in their history.

But today, there’s no place to fully experience the fin-de-siècle like Muzsa, and the Gresham Palace. The latter rises on the Pest side of the Szechenyi Chain Bridge—the first bridge to span the Danube in Hungary, and once one of the longest spans in the world. As Hungary’s fortunes rose and fell, so did those of the palace.

Designed by two Hungarian architects (Zsigmund Quittner and Joszef Vago), in 1906 it opened as the opulent headquarters of the Gresham Life Assurance Co. It was an Art Nouveau masterpiece, a place of business but also a residence, the home of senior staff. However, hard times were ahead. In the Second World War, the Red Army commandeered its hallowed halls as barracks. In the communist period, the palace fell into disrepair, and the building became a grubby apartment block.

That’s no longer the case—far from it, in fact. Renovations stretched from the late 1990s into this century. Designers were careful to salvage and preserve Art Nouveau elements throughout. In 2004, the building welcomed the first guests to the Four Seasons Gresham Palace. And in October of 2020, after three years of work, Muzsa (Hungarian for “muse”) opened, completely transforming the ground level of the hotel.

A few steps inside took me back in time. Leaving behind the honking horns of busy little taxis and the hammering of construction workers overhauling the Chain Bridge, I was transported back to the fin-de-siècle. Ostensibly a lobby bar, it’s much more—in fact, there’s no other place to better experience Budapest’s glory days.

I was greeted by Zoltan Forrai, a friendly, charismatic bar supervisor. He showed me around, pointing out the hand-painted china (“you’ll only find this in two places—here, and in Buckingham Palace”) and all the gilded design elements, for which they have already won three awards. He handed me a cocktail menu, urging me to flip through the whimsical illustrations. The opening page includes the Story of Muzsa, which reads, in part, “you can summon her here, a palace for the ages…let her inspired cocktail creations dance with your senses, and be transported to a timeless Golden Age.”

“The turn of the century was such a period of freedom and prosperity,” explained Forrai, filling in a bit more of the hotel’s history, noting the palace was built to demonstrate Hungary’s might and affluence. In those early years, Hollywood’s elite spent time here. During the Cold War, the CIA had a secret office inside. Now, both movie stars and world leaders are back, something I would experience a little later in the evening. I carefully sipped an Old Fashioned made from Hungarian whiskey from a specially handmade tumbler that Forrai mentioned, in passing, cost 300 euros (each) to make.

He handed me off to Adam Horvat, the sommelier, who noted that the communist years were also very bad for winemaking. “It was all about quantity, never about quality,” he said, looking a little pained. He noted that the country made three classes of wine—for local consumption (“very poor”), for the Soviet Union (“also poor”), and for export abroad (“much better”).

In a private, tucked-away tasting room, Horvat had me sip a few different Hungarian wines which, he noted, have recovered nicely since 1989. This country has a very long tradition of winemaking, dating back to the 5th century, in 23 separate regions. Muzsa made a top priority of featuring the very best Hungarian wines, and I try from bottles preserved and procured by private collectors, including furmint, a Hungarian grape, from Tokaji, the world’s oldest classified wine region. It was made by Szepsy, a family-owned winery dating back to the 1500s—the current winemakers represent the 18th generation of the family. “These are top wines, they even win French competitions,” explained Horvat.

I did not try any of the Royal Tokaji Essencia, a luxury bottle encased in glass, and priced at the rather steep sum of $35,000. And too soon, it’s all over. A man slips into the room and quietly whispers something to the staff. A president, or a prime minister, in town for a summit, and staying at the hotel, would like to spend a little time in the tasting room. I was happy to take one more sip, muse for a couple more minutes at the Art Nouveau splendor, and slip onto the Budapest night, the Danube just a few steps away.

Fly: Budapest’s Ferenc Liszt International Airport (BUD) is the country’s largest hub. Wizz Air, a low-cost carrier based in Hungary, will take you to dozens of cities across the continent. Major airlines like Swiss, Lufthansa, and Emirates also service the airport, but getting here from North America will almost always involve at least one connection in Zurich, Munich, Dubai, or elsewhere.

Getting Around: Budapest has a well-developed network of trams and buses, covering all quarters of Buda and Pest, plus their first-in-Europe metro system. Ride-sharing services are also readily available and very inexpensive.

Stay: The Four Seasons Gresham Palace is a landmark, and the country’s premier hotel. In addition to the marvels of Muzsa, their uber-comfortable rooms overlook the Danube River and the skyline of Buda.

Take Note: While Hungary is a member of the European Union and part of the Schengen Zone, it does not use the Euro as its currency. You’ll need to purchase Hungarian forints (HUF) or get some out of the ubiquitous local ATMs. One U.S. dollar will buy you about 380 HUF.