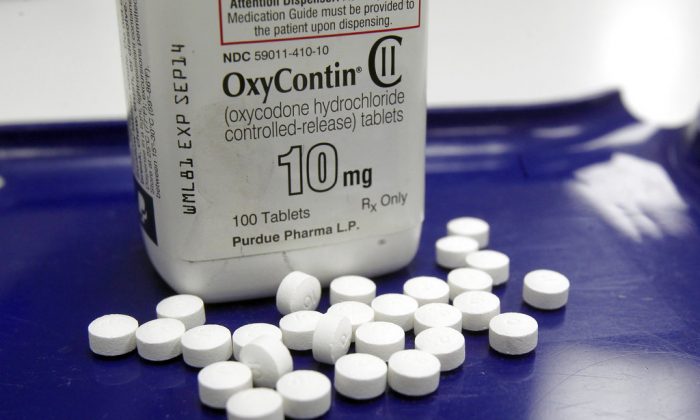 OxyContin pills are arranged for a photo at a pharmacy in Montpelier, Vt. on, Feb. 19, 2013. (AP Photo/Toby Tajlbot, File)
Health News

The expansive court case seeking to hold drugmakers responsible for the nation’s opioid crisis has a new complication: How does it deal with claims covering the thousands of babies born dependent on the drugs?

Attorneys representing the children and their guardians want their claims separated from the federal case in Cleveland that involves hundreds of local governments and other entities such as hospitals. They told a skeptical panel of judges in New York on Nov. 29, that they have different legal issues, a need for faster relief because the babies need services in the first years of their lives. They also told the judges that as it is, they lack the leverage to exact a settlement from drug companies.

Babies, unlike governments or businesses, have been directly harmed by the actions of drugmakers and are entitled to their own payments, said Scott Bickford, a lead lawyer for the children and their guardians.

Bickford said more than 150,000 babies were born in opioid withdrawal from 2012 through 2016, and that the number grows each year.

He said initial hospital stays for babies born to an opioid-addicted mother can cost $200,000 to $250,000 more than other infants born without complications.

Drug manufacturers and distributors oppose creating a new structure for the lawsuits over the children and judges on the Judicial Panel on Multidistrict Litigation hearing the matter in New York on Thursday wondered what good it would do.

Opioids—including prescription painkillers, heroin and synthetic substances including fentanyl—killed nearly 48,000 Americans last year, according to the U.S Centers for Disease Control and Prevention. The cost of treatment, providing an overdose antidote, foster care, jail stays, ambulance runs and addressing a growing homeless crisis have added up for governments and taxpayers. Studies have found that opioid addiction also has depleted the workforce, harming the economy.

More than 1,400 plaintiffs have had their federal cases consolidated under a single judge. They include county and local governments, hospitals, unions, American Indian tribes, and individuals. Hundreds of others have sued in state courts. Cleveland-based federal Judge Dan Polster has been pushing the parties to reach a settlement.

The judicial panel’s chairwoman, Judge Sarah Vance, said it’s unlikely any settlement would be reached without considering the children.

“It’s hard for me to see how the defendants are going to settle if they’ve got 150,000 children unhappy because their needs are unmet,” Vance said.

Angela Vicari, a lawyer for the drug manufacturers, told the judge that she wasn’t aware of the lawyers for the babies seeking to negotiate.

But lawyers for the children said they don’t have a voice in the committee of plaintiffs’ lawyers leading the case, making it hard to request the information from the industry that they believe would help prove their case. Attorney Kevin Thompson said it’s essential to request information on any industry laboratory studies on the impact of drugs passed from mothers to children.

Lawyers also worry that any settlement reached by government agencies won’t go to help the people who have been hurt. “They end up paving a road with that,” Bickford said.

Other plaintiffs in the omnibus opioid litigation have not objected formally and did not speak in court Thursday, but some are cool to the idea of separating the cases involving the children. One of the lead lawyers for the local governments, Paul Farrell Jr., said he is trying to get help for children born with opioid dependency and have prenatal care funded by the drug industry.

He said in an interview that the plaintiffs share a goal: holding drug manufacturers liable for the crisis. Unless that happens, he said, no one will get the payouts they’re seeking.

“You’ve only got to shoot the pig once,” he said Tuesday.

Lawyers representing the children and their guardians say there is precedent for their request to go it alone, after Polster granted the American Indian tribes a separate test trial for their claims. In August, the judge denied similar status for the cases brought on behalf of babies.

That decision prompted the lawyers to ask the panel of judges to put their cases under another judge in West Virginia or Illinois.

A ruling is expected in the next several weeks.