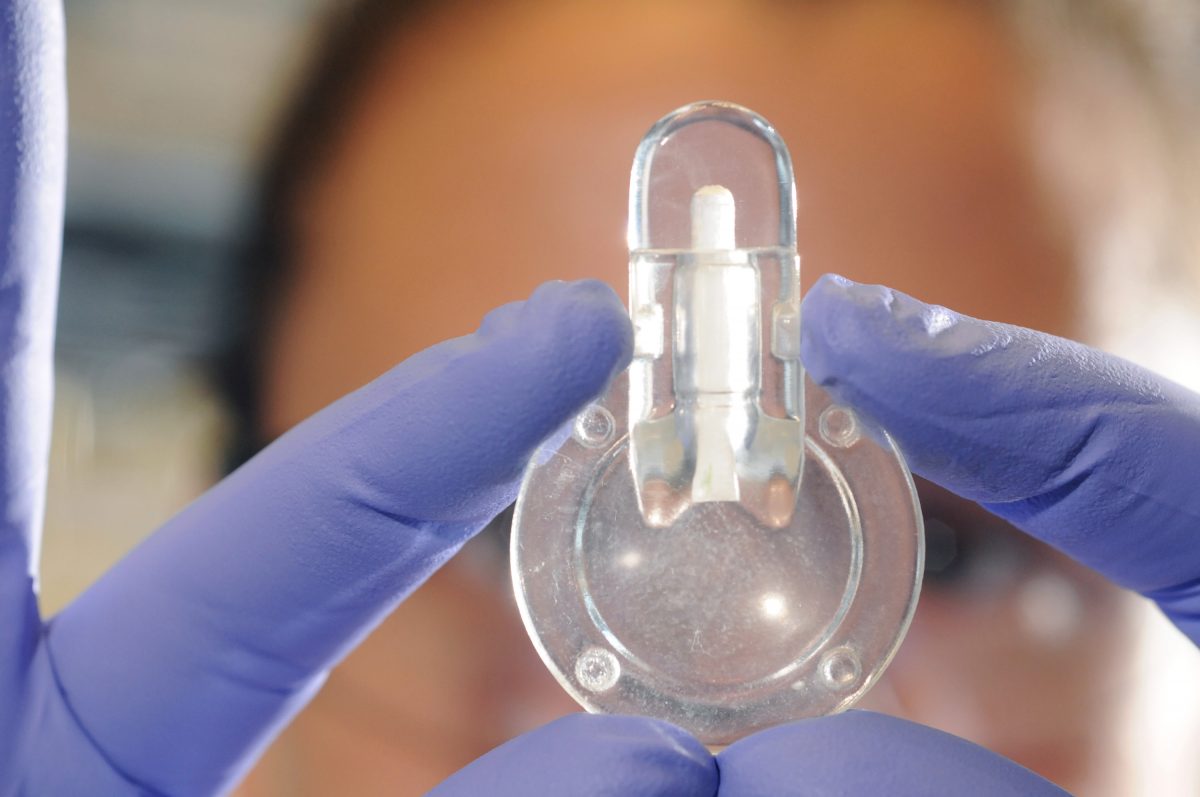 A prototype device for anemia testing. The device could allow faster diagnosis of the common blood disorder and allow people with chronic forms of the disease to inexpensively monitor their blood at home. (Gary Meek/Georgia Tech )
Health

A device that uses a single drop of blood can quickly diagnose anemia and allow inexpensive at-home monitoring.

The basic test produces results in about 60 seconds and requires no electrical power. A companion smartphone application can automatically correlate the visual results to specific blood hemoglobin levels.

By allowing rapid diagnosis and more convenient monitoring of patients with chronic anemia, the device could help patients receive treatment before the disease becomes severe, potentially heading off emergency room visits and hospitalizations. Because of its simplicity and ability to deliver results without electricity, the device could also be used in resource-poor nations.

“Our goal is to get this device into patients’ hands so they can diagnose and monitor anemia themselves,” says Wilbur Lam, a physician in the Aflac Cancer and Blood Disorders Center at Children’s Healthcare of Atlanta and the department of pediatrics at Emory University School of Medicine.

“Patients could use this device in a way that’s very similar to how diabetics use glucose-monitoring devices, but this will be even simpler because this is a visual-based test that doesn’t require an additional electrical device to analyze the results,” adds Lam, who is senior author of a paper published in the Journal of Clinical Investigation.

Less Than a Droplet

The test device was developed in a collaboration of Emory University, Children’s Healthcare of Atlanta, and Georgia Institute of Technology. It grew out of a 2011 undergraduate senior design project at Georgia Tech and Emory University.

Using a two-piece prototype device, the test works this way: A patient sticks a finger with a lance similar to those used by diabetics to produce a droplet of blood. The device’s cap, a small vial, is then touched to the droplet, drawing in a precise amount of blood using capillary action. The cap containing the blood sample is then placed onto the body of the clear plastic test kit, which contains the chemical reagent.

After the cap is closed, the device is briefly shaken to mix the blood and reagent.

“When the capillary is filled, we have a very precise volume of blood, about five microliters, which is less than a droplet—much less than what is required by other anemia tests,” says Erika Tyburski, the paper’s first author and leader of the undergraduate team that developed the device.

Blood hemoglobin then serves as a catalyst for a reduction-oxidation reaction that takes place in the device. After about 45 seconds, the reaction is complete and the patient sees a color ranging from green-blue to red, indicating the degree of anemia.

Tyburski and Lam have teamed up with two other partners and worked with Emory’s Office of Technology Transfer to launch a startup company, Sanguina, to commercialize the test, which will be known as AnemoCheck. The test ultimately will require approval from the FDA. The team also plans to study how the test may be applied to specific diseases, such as sickle cell anemia.

The device could be on pharmacy shelves in 2016.

John Toon is manager of the Research News and Publications office at Georgia Tech and the editor of Georgia Tech’s Research Horizons magazine.

From Georgia Institute of Technology via Futurity.org.